As the death toll from today’s gruesome attacks on a Shiite procession commemorating the martyrdom of Hazrat Ali, probably the most venerated muslim saint after the Holy Prophet rises, few if any are addressing the core issues that have lead to these killings.

Since the advent of Zia ul Haq, Pakistan has been wracked with violence that is State sponsored and based on the absolute support provided to an interconnected umbrella group of Salafi militias that include the Taliban, the Sipah Sahaba and its militant wing, Lashkar Jhangvi, Jaish Mohammad, Lashkar Tayabba etc. These groups are provided political safety nets by parent groups like Jamaat Islami and other shadowy establishment figures like Hamid Gul and Imran Khan.

While they continue to attempt to achieve “strategic depth” in Afghanistan and Kashmir, these groups have not spared anyone in Pakistan who does not share their Salafi ideology. They have lynched Christains in Punjab, killed Shias and Ahmadis all over Pakistan and have not even spared the Brehlvi Sunnis.

Even after 9/11, the establishment has continued to play a double game and still supports such groups. This support continues even today after General Kiani has publically stated the establishment’s support of the “strategic depth” doctrine. Similary, the cosmetic differentiation between “good” and “bad” Taliban and the continual support to the most powerful militant networks as well as the support to Salafist Jihadi organizations like SSP, LeJ, LeT continues.

Those who are engaging in this blood bath are brazen as they can always count on the intelligence agency to release them if they are ever caught. Similarly, the judiciary is also sympathetic towards their cause. As for the media and the civilian intelligentsia, the less said the better.

The Media, lead by the likes of known Taliban sympathizer, Hamir Mir and the rest of the pack go out of their way to faciliate shows where Taliban apologists like Hamid Gul, Imran Khan, Qazi Hussain, Haroon Rashid, Ansar Abbasi and Roedad Khan are given a free reign to divert attention from the latest Taliban atrocities by engaging in conspiracy theory mongering. For them, the only obstacle to a complete Talibanization of society are certain political groups like the PPP and ANP that are not sympathetic to the Taliban. After Shaheed Benazir Bhutto, the ANP has had scores of its elected leaders killed for bravely standing up to the Taliban. However, neither the media nor the civilian intelligensia have any sympathy for this segment of the political class and are mostly on the same wave lenght as the security establishment.

As a minority, the Shias have been targetted the most violently and frequently. However, they are intellectually adrift. By placing their confidence in the Islamist lobbies that are controlled by the hardliners in Iran, they view their continued targetting in the same conspiratorial light as the rest of Pakistani society. Similarly, by place their confidence in urban ethno-fascists, they are unable to fathom that their continued targetting is a direct result of the policy of strategic depth. 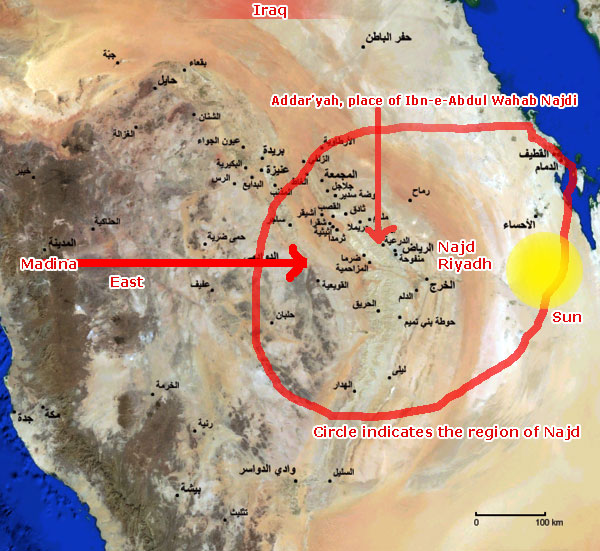 Both Shias and Sunnis in Pakistan need to realize that those who attacked Karbala Gamey Shah in Lahore today share the same ideology with those followers of Ibn Wahab and Ibn Tamiyah who sacked the Holy city of Karbala in 1802 and who killed thousands there. They are the same who attacked the shrine of Imam Abu Hanifa. They are the same who attacked Mecca and Medina and Jannat Ul Baqi, the grave yard of the Holy Prophet, his family and descendants and companions. This dark force cannot be defeated by continuing as a fortress state for such a path will be the destruction of Pakistan itself.

LAHORE: Twenty-nine people were killed and over 200 others wounded, some seriously, in three blasts that ripped through a procession on the occasion of Yaum-e-Ali in Lahore on Wednesday.

The blasts left 29 people dead while over 200 wounded, including women and children were shifted to hospitals. Some of them are said to be in serious condition.

A police constable was also killed in the blasts, CCPO Lahore said. 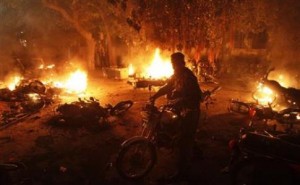 The first blast that occurred in the middle of the procession at Karbala Gaame Shah was followed within minutes by two high intensity suicide blasts at Bhaati Chowk, police sources confirmed.

Commissioner Lahore said that the second and third blasts were suicidal and that a head of one of the suicide bombers has been recovered.

Relief and rescue efforts kick started after blasts and dozens of injured, including women and children were shifted to different medical facilities including Meo Hospital.

Later, the participants of the procession and enraged people pelted police vehicles with stones and damaged public property. A TV footage showed a motor cycle and furniture burning with rising flames.

The Prime Minister said those playing with lives of innocent people will not be able to escape from the grips of law.

The President, PM and Nawaz Sharif in their separate statements termed the blasts as cowardly acts and expressed sympathies with the bereaved families.

The President and Prime Minister ordered inquiry into the incident and provision all necessary medical facilities to the injured.(TV News Report)