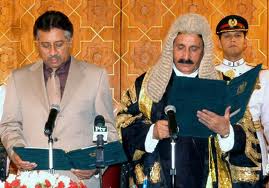 The Supreme Court (SC) has extended the tenure of 32 additional judges working in the high courts of the four provinces till further orders. The eleventh hour decision has been taken to overcome the situation created by a legal void due to delay in implementation of Article 175-A, which lays down the procedure for appointment of judges to the superior courts. Although the order for such an extension was critical for the effective functioning of the high courts, particularly the Balochistan High Court, whose all four judges’ one-year term was about to expire on September 5, some quarters have questioned the appropriateness of the SC, instead of parliament, issuing such an order. The SC took this decision in response to letters from the chief justices of the four high courts requesting resolution of the issue of judges’ appointments.

Currently, the SC is hearing petitions on the 18th Amendment, particularly with reference to Article 175-A. The situation emerged since both the government and SC did not resolve the issue in a timely manner in line with the constitution, which empowers parliament in Article 267(a) to remove any difficulty arising in giving effect to the provisions of the 18th Amendment. Why did the government not take this matter to a joint session of both houses of parliament as laid down in Article 267(a)? According to news reports, belated moves are being made by the government to constitute judicial commissions and parliamentary committees for this purpose. If indeed the matter being sub judice does not restrict the implementation of the concerned articles of the 18th Amendment, then why was this move not made earlier?

For its part, the SC chose to concentrate all its energies on the hearing of petitions against the 18th Amendment. This process has prolonged to an extent that the government has been pushed into an unenviable position and implementation of Article 175-A has been made highly controversial. The end to this case is still not in sight, casting a shadow on the supremacy of the constitution and independence of parliament to amend the constitution.

Petitions against this amendment have taken the plea that it goes against the fundamental rights and basic structure of the constitution. Government’s counsel have defended its position on the plea that hearing of such petitions is outside the jurisdiction of the SC in the light of Article 239(5), which clearly states, “No amendment of the constitution shall be called in question in any court on any ground whatsoever.” Surprisingly, in the latest hearing of the 18th Amendment case, the advocate general of Sindh, Yousaf Leghari, raised a tangential, but very important issue. He surprised the court by speaking against the Objectives Resolution, urging its deletion from the constitution. The Objectives Resolution had first been incorporated as a preamble to the constitution by Prime Minister Liaquat Ali Khan. Later, General Ziaul Haq made it a substantive part of the constitution. This move opened the door to religion overshadowing all spheres of public life, sometimes even overriding rationality. Since certain quarters claim the interpretation of religion to be their exclusive domain, they have been able to impose their retrogressive views on the majority. Pakistani society has seen a steep rise in intolerance and violence as successive regimes used religion to perpetuate their vested interests, at the cost of sectarian and religious conflict. It is time that a debate was initiated and the constitution rid of the vestiges of dictatorship, because unless and until Pakistan reclaims the ideals of the founding father of the nation, it will continue to be exploited by obscurantist fundamentalists in various guises and forms.