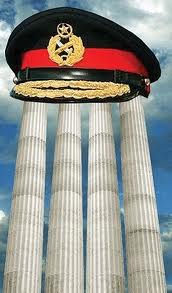 The MQM, which often complains of Taliban’s growing presence in Karachi and is unhappy for being unable to convince its coalition partners to retain the local government system of the Musharraf era at least in Sindh, has surprised everybody by suggesting an unthinkable remedy for the country’s ills that every parliamentarian has only recently vowed to reject and fight back by adopting the 18th Amendment.

The MQM chief Altaf Hussain has publicly urged ‘patriotic generals’ to impose a sort of martial law in the country and bring to an end the hegemony of corrupt politicians and landlords. It immediately caused a political storm. Several politicians belonging to both the coalition government and the opposition have reacted instantly and condemned the statement, calling it irresponsible and mischievous. Civil society has also rejected Altaf Hussain’s utterance and reminded him that democracy is the only way to move forward.

It was during a telephonic address to a gathering of MQM workers in Karachi on Sunday last that Mr Hussain had floated this proposal which his local deputies later insisted was the right step to save the country. The political pundits are in a fix as to what has prompted the leader of the urban-based party to issue such a statement that can lead to dangerous consequences.

However, the Karachi-based MQM leaders are facing difficulty in keeping a bold face to defend what their London-based chief has spoken out in his usual screaming tone a well-calculated policy statement, of which apparently they were not informed in advance and were equally taken aback like other citizens. He was in fact addressing the real stakeholders of power in the country seeking their intervention to put the country’s affairs back on the rail but at a time extremely inappropriate for such an invitation. The country is struggling to overcome effects of the worst ever floods in a century.

The MQM, a coalition partner of the PPP in Sindh and at the Centre and holding some important portfolios in the two cabinets, boasts of being a secular, democratic and liberal party and usually talks of sweeping changes in the current social system to eliminate feudalism and provide greater facilities to the middle and lower middle classes.

At the meting, he also blamed the US for supporting the reactionary feudal classes in Pakistan that have strangulated the masses through their corrupt ways.

In the face of the barrage of criticism by the PML-N, PML-Q, ANP, JUI-F and JI, An MQM Senator told a private news channel that his party was not in favour of derailing democracy and that Altaf Hussain did not mean martial law but something similar to it that would end corruption and bring back the plundered wealth of the nation. He particularly referred to the NRO and demanded across the board action against the looters whether they were politicians, generals or the bureaucrats.

The Peoples Party, which has been accommodative of the concerns of the MQM in its drive to take all the political parties on board to provide moral support to the army in its efforts to eliminate religious militancy from country’s soil, has been careful in its reaction initially but has now strongly criticised Altaf’s views favouring a martial law.

Information minister Qamaruzzaman Kaira has described the statement being against the spirit of the constituion and democracy and hence not acceptable. As compared to the PML-N leaders’ calls for invoking the Article 6 (that deals with the cases of sedition), the PPP leadership used only cautious words and insisted on the importance of saving democracy, for which it had rendered so many sacrifices.

It may be recalled that it was the MQM chief who proposed the name of Asif Ali Zardari for the office of the president. The ‘secular’ credentials of the MQM had been a source of strength for the PPP that had put war on terror on the top of its agenda in its election campaign. The MQM was duly awarded for its support to the PPP: it has a well-deserved share in the provincial (Sindh) and central government portfolios while Ishratul Ibad continues to be the governor of Sindh, originally selected and installed during the Musharraf regime.

There was no problem for the PPP to form a government in Sindh on its own; the PPP would not have needed this party in the centre either if Zardari had offered some exceptional concessions to the PML-N. But keeping the MQM out of the government would have been more problematic for the PPP given this party’s control on the two major cities of the Sindh — Karachi and Hyderabad. Though the MQM secured good share in power in both the Sindh and the Centre but it was more than manifest to its leadership that the abolition of the local government (LG) system would do it the real damage. It had pinned much hopes on the Rabbani-led parliamentary committee and it proposed the redrawing of the provincial boundaries while it supported the provincial autonomy but such a move was defeated.

It was not only the MQM that has been upset by the 18th amendment but a large segment of the population that had attached high hopes with this monumental exercise to correct the anomalies in the law of the land. The ANP wanted to strip the constitution of its ‘Islamic’ credentials that would have really alleviated the sufferings of the religious minorities and made the country more acceptable to the civilised world but the federal law minister spearheaded the move to sabotage this move. The ANP did not press for its demand and remained contented with the renaming of NWFP as Khyber-Pukhtoonkhaw — the other ‘secular’ forces also saw it better to keep quite. Such other forces were the Baloch nationalist parties who wanted a new ‘social contract’ and do away with the present constitution altogether.

While the ANP, PPP and PML-N stood for provincial autonomy, the MQM wanted to condition it with regional concessions: it wanted the LG system intact to ensure its control over Karachi and other urban centres of Sindh which constitute its support base. Hopes of the leadership remain high and it entered into negotiations with the PPP on the issue but its hopes did not materialise. The political atmosphere of Karachi heats up and flares up each time when the Sindh government tries to convey the message that the LG system of the Musharraf era cannot be revived.

The tussle between the MQM and the ANP has caused a heavy loss to the peace, life and property in Karachi, each side claiming deaths of their workers in hundreds whenever there is an exchange of fire. The interior minister and the premier had to rush to Karachi early this month when the murder of MQM’s provincial legislator plunged the city into chaos and anarchy. In current month the ANP has lost one of its leaders. The spiral of violence just goes on.

Altaf Hussein’s call for ‘some sort of martial law’ is a clear message to the US, (Ambassador Bryan D. Hunt met him a few days ago in London), which he has criticised for supporting the feudal lords, not the middle class. In the same vein he has praised India for having a ‘successful’ foreign policy while terming that of his own country as ‘ineffective’. Although he made the call for martial law, he also questioned whether time had not come for refusing to accept America’s dictates.

While the political parties including PML-N, JUI-F and ANP have rejected MQM’s call, the civil society has also come forward in defence of democracy. “We have witnessed time and again that military rule exacerbates ethnic cleavages and separatist tendencies gain currency amongst smaller nationalities under military rule. It is only democracy that can cater to the needs of a country having diverse nationalities and can hold it together.” said a press release of the Centre for Peace and Development Initiative (CPDI) , Islamabad, adding that it “vehemently condemns these invitations to the generals and urges politicians to see beyond narrow parochial and short-term interests.”