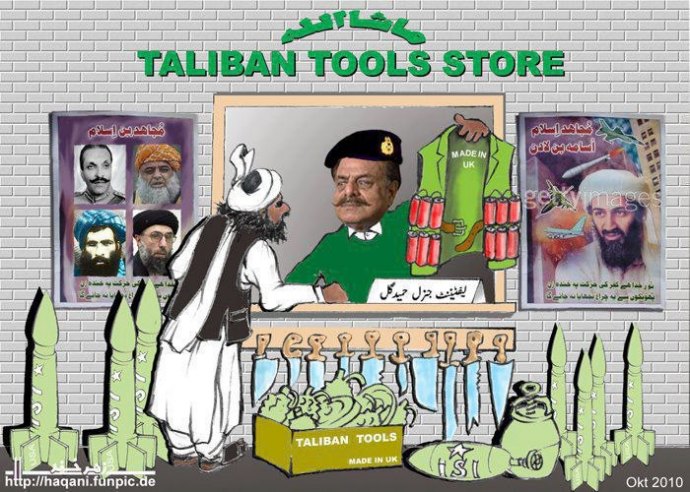 Satan and other evil characters’ve
come out of the Holly Scriptures
to rule my land as ruthless tyrants!

They crush flowers under their boots,
deface beauty, hate love and trade in wars
to take complete control of planet earth!

Peace is a useless business as they make
money out of wars—so they advocate for
barbaric cults to annihilate global peace!

‎”God is a weapon—they worship death.” This poem of Habib Sulemani actually says that there is no Taliban, no Al Qaeda but a gang of criminal army generals in Pakistan that has killed innocent Sunni Muslims in the name of Jihad including the helpless girls of Lal Masjid… these generals kill innocent Shia Muslims in the name of sectarianism… they’ve killed Christians, Ahmedis and many other minorities to create conflict in our peaceful Pakistani society and then cash the conflict internationally…

These generals are known as “Jihad Frosh Generals” or those generals who sell jihad in the global market and get dollars… These generals use innocent Pashtuns as Taliban and poor Arabs, expelled from their countries, as Al Qaeda to get dollars from America… It’s time to bring the so-called Taliban and Al Qaeda people to normal life but these generals will not let their ATM card go easily… so, let’s bring this gang of criminal generals to justice first…

Al Qaeda, Taliban and other terrorist
outfits’re just puppets while these evil
characters’re the brains behind terrorism!

God is a weapon and they see nothing in life
except a vast killing field—
but’re scared of the dark grave—
so they worship death out of fear!