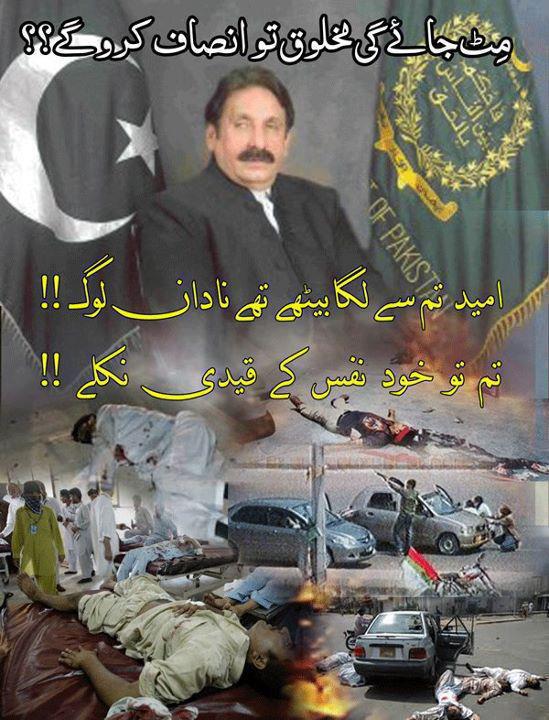 Curiouser and curiouser… the more one sees of the ongoing drama the more room for amazement: a judicial fast-track for the luckless PPP, a Pakistan Railways slow-track for everyone else. Judging by the evidence, summoning an elected prime minister, the second in a row, preparatory to sending him home, seems a lighter proposition than looking into the allegations against young Arsalan Iftikhar, who deserves some kind of a national award for his meteoric business success.

Make no mistake, this is high quality entertainment complete with a copious salute to Khalil Gibran (expect him to be turning in his grave) and the occasional reference to the Caliph Omar.

The second caliph had a notoriously short temper. He certainly didn’t suffer fools gladly. If his spirit had an idea of the uses to which his name is put in the Islamic Republic it would not be amused. Chastisement at his hands could come with a stick, if not a sword. How he would lay about him if he had to deal with the nonsense we are so good at producing, and at which we seem to be excelling these days?

Happy were the times when the only threat to democracy came from 111 Brigade. Then at least things were clear, in black and white. Whenever the army thought that democracy needed a rest, the brigade would move, parliament would be dissolved and a prime minister would go home. There was no confusion. Amidst a general condemnation of politicians and politics, the generals would say they had come to establish order.

Democracy, always a fragile plant in our greenhouse, is again under threat but from an unlikely quarter. The slogan being raised is not about the establishment of order but upholding the rule of law.

This would be a fine thing if only it did not rest on such selective foundations: a quick track for the PPP, a very slow track for others. The way the wheels of justice have been spinning these past three years, ever since the restoration of the present Supreme Court, it would seem that the only seriously corrupt politician in Pakistan is Asif Ali Zardari. Others are as pure as the driven snow.

Quite apart from the question of presidential immunity, who is clean, or with his clothes fully on, in the bathhouse of Pakistani politics? Does the past of any of the current crop of heroes bear examining? Easy loans and then easy loan write-offs, friendly banks, very friendly judges (Malik Qayyum coming immediately to mind)…the paths to political glory are studded with such devices. Let us not even mention the role of the intelligence agencies in propping up some parties and holding others down.

Imran Khan says he is different and that is his claim to fame. But look at the faces he has collected around him. Are they different? In a few days time he will be rubbing shoulders with Sheikh Rashid Ahmed. Is Sheikh Rashid anyone’s idea of being different?

And if politicians be beyond the pale, what about their lordships? How many refused to take oath under Musharraf’s PCO? And how many, when given the opportunity, opposed the validation of his takeover? These are familiar questions asked oft-times before but tempting to raise again when moralising and self-righteousness from the bench become a bit too much.

This is a plea for tolerance, not for condoning crime. If there are no Sir Galahads and St Georges in our political, military and judicial arenas, if all the prophets of revolution and setting things right have skeletons of different sorts in their cupboards, then it would appear that the best thing to do is draw a line under the past and declare a general amnesty. It won’t do for the pots to call the kettles black, and for kettles to return the compliment, when the pervading colour of the catwalk that is Pakistani governance and politics is black.

Take another example of selectivity. If the Asghar Khan petition about the ISI doling out money to a select band of politicians in the 1990 elections was pursued with the same vigour as applied to the NRO case against President Zardari, a whole bunch of politicians would be disqualified from contesting elections. Lt-Gen Asad Durrani, then ISI head, is proclaiming to the heavens that list of lucky souls. But he might as well be banging his head against a wall, the petition being heard at the phenomenal speed of Pakistan Railways.

There is an election petition pending against Shahbaz Sharif. If it was taken up, and thank God that it isn’t, there would be trouble in Punjab. Imagine if this were something against a PPP chief minister…the fireworks that we would then see.

Not that the PPP are innocent lambs being led to the slaughter. The PPP and innocent…this is an invitation to hilarity. But in the clean waters of our cesspool, point to the soul who is innocent and it will be time to forsake the world and take up residence in the Cholistan Desert.

This brings us to the latest summons from the SC. If the axe eventually comes down on Raja Pervaiz Ashraf the heavens will not fall, democracy’s pillars will not collapse. But consider for a moment the waste involved, the time and energy consumed, in another fruitless exercise.

Their lordships and even the attorney general have spoken of a middle way, satisfying both sides. Shouldn’t their lordships take the lead, quote some more of Khalil Gibran, throw in some more references to the Caliph Omar, and move on? Or is this too much to ask?

Look how we settled the Nato supply route question. Oh, the high principles that we invoked, national honour and national sovereignty. On no account would we open the routes, not until America grovelled before us and satisfied our demands, a few of them (read the parliamentary committee report once again) straddling the frontiers of absurdity. The Defence of Pakistan Council (where have its champions fled?) preached defiance and promised resistance. Imran Khan was on the same wavelength, threatening long marches (the Pakistani idea of a long march being a motor ride from one city to another). But when reality caught up with the national mood all our fire seemed to have gone, roar turning to something very much like a whimper.

Far be it from their lordships to take the same road. But there is the law of diminishing returns. The nation is tired. Economic hard times, the perpetual loadshedding, seem more pressing issues than arguments about the rule of law.

Yes, we know the familiar talk…things can’t go on like this: there must be change, and so on. But change won’t come from the winds blowing down from the judicial heights. And let’s not be under the illusion that lurking somewhere in the wings is an Ataturk or a Salahuddin Ayubi. No such luck for a nation down on its luck for some time. On offer are pedestrian and dull choices. We have to make the best of them. And for once, taking a cue from the Olympics, we must walk or run the distance.

This means, whether we like it or not, wait for the elections and see what they throw up and live with the consequences. But we’ll get there only if the champions of the rule of law allow us to get there. Our old problem was excessive military virtue. Now it is something else.