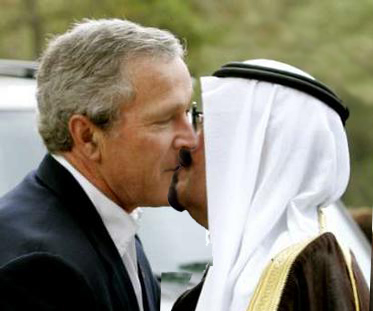 Marshal Joseph Stalin is said to have claimed, “Stalin is Soviet Power”. If he hadn’t been the ruler of such a powerful state then no doubt his fate would be worse than that of Saddam or Qaddafi because, without any arguments, history has proved that countries having plenty of recourses has no right to claim ‘power’ or to stand against the World Imperialism, headed by the United States of America! Power only belongs to ‘The White Elephant’. No one else has the right to claim power!

Even the United States’ Mitt Romney had asserted that “God created the United States to lead the world”. In Iraq’s scenario, they lead from the front while in Libya’s case they lead from behind. But they would never abandon ‘leading’ others irrespective of the fact, a nation is committed toward self-governing and is restive to foreign ‘invasionary’ leadership!

By “democracy”, US Imperialists simply mean ‘fooling your masses through puppets’, and by “Peace” they mean ‘absence of revolutionary movements directed against the World Imperialism’ and by ‘freedom’ they mean ‘freedom to exploit the recourses of poor nations in US’ interests’! (These words sound good to hear but do anyone else tried to find out their meaning as per US’ hypocritical dictionary?). Likewise, for American hypocrites, Qaddafi was overthrown by “rebels” but what if we say, Qaddafi himself was a rebel, fighting the dictatorship of a global network of imperialists?

In this so-called “Global Village” of Hillary Clinton, who can now dare to challenge US’ dictations? Holding play cards and doing peaceful protests against United States’ unjust wars are strengthening US’ “democracy” all over the world that is the reason that the United States is one of the chief sponsors of Gandhisim on the International stage. To them, Putin’s Russia is better than Saddam’s Iraq or Qaddafi’s Libya. They can tolerate barking dogs but can’t tolerate daring ones. Daring ones can defend themselves only if they are “well armed” to defend themselves and their nations from foreign aggression. US’ effort to ‘denuclearize’ North Korea is one such example to counter such daring ones from strengthening themselves. However, history reveals, the United States of America is the only state on the face of the earth that ever used her nuclear bomb against any country! North Korea never did so nor would it!

Thomas Sankara had rightly said, “he who feeds you, controls you”. The United States feeds the poor nations of the world, either directly or indirectly through her ‘maid’ United Nations, not to ‘help humanity’, but to control them and their resources. Saddam didn’t have “weapons of mass destruction” but his major “crime” was having a political philosophy of ‘self-governing’. People, who govern themselves and resist US’ involvement in their matters, are worst adversaries of US’ imperialists, and thus are foes of “Humanity”, “Peace”, “Democracy” and “Freedom”!

US President Bark Obama stated after the atrocious assassination of Libyan leader, “Gaddafi [’s] death is warning to iron-fist rulers” that is, to those leaders who resist US Imperialists’ adventures. While Ban Ki-Moon, UN Secretary General, said, “the road ahead for Libya and its people will be difficult and full of challenges” that is now there would be no free electricity, no interest-free loans, no more freedom from external debt; now it’s time to suffer inflation, poverty, homelessness and unemployment. New “democratic” Libya of puppet leaders wouldn’t be different from other poor Afro-Asian states. This is what so-called Obama Doctrine states, “leading from behind”. The best thing of leading from behind is that here you can easily claim yourself “peaceful” while at the same time waging wars on others. Here colonization is done in a ‘democratic way’ through puppets.

Now better say “Obama is world power!” and by ‘Obama’ I doesn’t mean that black American Nobel Laureate President as in the battle between ideologies, men are mere representatives!

Saad Ahmad is a Pakistan-based freelance contributor, blogger and a social activist. He is Sufi follower and believes in supremacy of humanism. He can be reached at saadhumanist@gmail.com