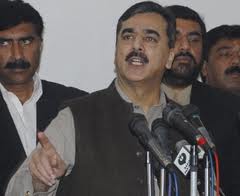 * Government did not divert focus from flood relief despite criticism

The continuing floods were devastating to the country, but the government was committed to converting the massive challenge in an opportunity to build a new Pakistan, Prime Minister Yousaf Raza Gilani said at a press conference at the Multan airport, on Sunday.

“The political parties should rise above petty differences and stand together in reaching out to the flood-affected, and to rebuild a stronger Pakistan,” he said.

Earlier, the PM accompanied by Saudi Prince Al Waleed bin Talal visited a relief camp at Muzaffargarh, and took an aerial view of the flood-hit areas.

Gilani said the entire world stood by Pakistan in its hour of need, and the nation itself was united and had the spirit to help their “brothers in need”.

He said that although the government had to face criticism, it had not let its attention be diverted to other issues and remained focused on rescuing the flood-hit people and providing relief to them.

Gilani said the government would soon convene a meeting of the Council of Common Interests to devise a national strategy and to discus “how to move ahead with the rehabilitation and reconstruction process”.

“The provinces will be consulted on the national strategy for rehabilitation and rebuilding. Pakistan is passing through extremely difficult times and the country needs to be united now more then ever,” he added.

Gilani said the floods had badly damaged 1,000 bridges, 4,000-kilometre long roads, one-fifth of the irrigation infrastructure, livestock and crops, besides affecting over 20 million people in the country. “The passion with which the nation was extending help to its brethren makes me proud,” the premier said, adding that children and students were on the roads to help the troubled people.

“Whatever aid we will receive will be spent in a transparent manner and its details will be put on the web site,” the premier said, adding that 80 percent of the foreign assistance would be spent by their own NGOs and half of it was expected to be spent on overheads expenses. APP