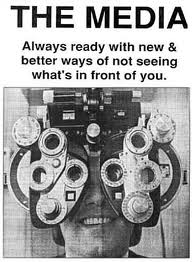 In his essay on civil disobedience, Henry David Thoreau once said, “The rich man is always sold to the institution which makes him rich,”. The Mass Media, the collection of newspapers, magazines, and TV news programs that reach a mass audience, is usually owned and controlled by media corporations. Today, media corporations are such institutions that make people rich.
If I’m not mistaken I think no more than five major media groups control the majority of the mainstream media in Pakistan. They enjoy monopoly over information, as there is no ban on cross-ownership of television and newspapers, so you know only what they want you to know. Today, the media power is too often used to promote reporting violence, anger[against civilian elected government]and sensationalism. Corporate manipulation, greed, and irresponsible misconduct, media monopoly and cartelization, the mark of elite ownership and control over information, these trends and contours are extremely detrimental to our democracy and freedoms.
The Pakistani media grow vertically, and not horizontally, at the same time, vertical integration gives the big players even more avenues to cross-sell and cross-market their products for even more amazing profits. An effect of this though is a reduction in diversity and depth of content that the public can get, while increasing the political and economic power of corporations and advertisers. An informed population is crucial element to a functioning democracy. The media tycoons always seen active demanding concessions in various taxes, duties, acquiring precious land, soft loans, increase in advertisements rates, enhancement in prices of newspapers, reduction in pages, size of newspapers taking a numbers advantages from private, public sector and the government in power. Forces such as competition for viewership with television and public (stock market) ownership of media companies have made many newspaper executives advocate market-driven reporting.
Pakistan’s media elites invest hugely in the material development of their networks but no such generosity is evident in providing a comfortable working environment to their employees i.e salaries of newspaper employees, including journalists were earlier fixed in July 1996 under the 6th Wage Award and since then no increase had been made for them although 7th wage award was announced and was supposed to be operative from July 1, 2000.
There should be  ‘press freedom’ not only for the owners of media houses, but also for their workers. It is unfortunate that a large number of journalists were being expelled from different media organisations without any warning and incentives. Concerned citizens observed that the unity that used to be seen amongst Pakistani journalists during the 1980s and 1990s was missing now. The salaries of journalists in rural areas are very low and in some cases journalists are not only deprived of salary but are not even given telephone, fax and transportation charges. It is also regrettable that no Pakistani TV channel covered the protests of journalists who were expelled from big media organisations.

The PFUJ pointed out that from 1996-97 to-date salaries of law-enforcement agencies personnel, armed forces, government employees, private sector have gone up by at least 400 to 500 per cent.

PFUJ to besieges houses of media owners houses
The Pakistan Federal Union of Journalists (PFUJ) has warned that if the salary and other lawful financial dues were not paid by the media owners before the Eid, the PFUJ would be constrained to issue call for besieging the houses of the Media Owners and this protects will be continued till the payment of the outstanding dues.
Expressing concern over callousness of the media owners, the PFUJ pointed out that the salaries of media related employees were not paid in the TV Channels – ARY, Royal, News-One, Vibz, Din, Waqt, Channel-5, Wash, Dharti, Rohi, Punjab, Din, Waqt, Star Asia, City-42, DMD Digital, FM-103, Daily Din, Pakistan, Jinnah, Khabrain, The Post, Mukadama, Ausaf, Jinnah, Daily Aaj Kal, Daily Times, Daily Leader, Daily Khabrain, Daily Din, Daily Pakistan, Daily Leader, Daily Kainat, Daily Baluchistan Times, Daily Tamir-e-Sindh, Daily Nousjj, Karachi, Daily Such, Karachi, Daily Nawai Sindh, Daily Dafah Karachi, Daily Larkana Times, Daily Dawate Amal, Daily Muslim Peshawar, Daily Taraqi Quetta, Daily Sadai Potohar, Daily Janbaz, Daily Sadia Pakistan Bahawlpur, without any rhyme or reason.
“Most of the electronic media and newspapers owners are so cruel that they have not paid salaries to their workers for 4 to 6 months together, not to speak of advance salary payment on the eve of Eid, the PFUJ added.
The PFUJ said once again true face of media owners had been exposed. Though they claim to be the champions of rule of law, independence of judiciary, protectors of human rights, fundamental rights, civil liberties, rights of people, etc, however, they were adamant to make payment of lawful dues and salaries to their workers. If media workers ask for due salaries they are threatened of being removed from service.
Quoting miserable conditions at the Khabrain, Royal, Star Asia, Punjab T.V. the PFUJ contended that their workers had not been paid salaries for the months of Jan. 2010 till todate.
The PFUJ pointed out that in Rohi TV, Sama TV, ARY, News-one Royal T.V. Business Plus T.V. Punjab T.V. City-42, Star Asia TV, Daily Aaj Kal, Daily “Times, Daily Post, Daily Jinnah, Daily “Business Today”, Daily “Ausaf”, sacked more than 510 employees during the last 120 days against all norms of justice, law and equity on the pretext of “financial crunch.”
The massive lay-off of media persons from the electronic media in the past eight months is also deplorable as over 680 media persons have been removed from their jobs without assigning any reason and justification under the garb of artificial “recession.”
All those media owners, who have not being paying wages and other fringe benefits to their workers for months together and who had ordered massive dismissal of media persons, claim themselves to be the protectors of the rights of people. But there is none in the country to bring them to justice,” the PFUJ regretted.
The PFUJ warned if such one-sided and cruel actions of media owners continued unchecked, media workers would be left with no option, but to resort to direct action, including besieging their houses and the PFUJ would expose them before the people here and abroad in all forums.
Shamsul Islam Naz
Secretary General PAKISTAN FEDERAL UNION OF JOURNALISTS
12-Nazimuddin Road, F-6/1Islamabad, PakistanPhone Office +92(0)51 2870220-1Facsimile +92(0)51 2870223
Cellular +92(0)300 8665523http://www.shamsulislamnaz.com
http://www.pfuj.pk