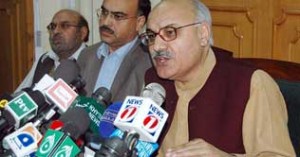 Information Minister Khyber Pakhtunkhwa Mian Iftikhar Hussain said that Altaf Hussain committed treason by issuing statement in favour of martial law and he should be sentenced under Article 6.
In a media briefing in Peshawar, he said that that the MQM was actually the biggest follower of feudalism. He said that conspiracy was being hatched against democracy in wake of floods.
He further said that at this difficult time, talks of martial law can not be tolerated.
He said that after the approval of the 18th amendment, inviting martial law was treason to the country. He said that IDPs were being shifted to schools as there was no alternative place so the holidays of schools would be extended.

Federal Minister for Law and Justice Dr Babar Awan has earlier said that there is no general in Pakistan who wishes to pursue Martial Law. He added that the ones in the past who were in favour of Martial Law are now either in graveyards[Qabrastan] or in the UK[Inglistan].
Awan was addressing a press conference in Islamabad on Friday. He said that the constitution or democracy are not in danger and that the current government will complete its tenure. He vowed that next elections would be held constitutionally.
Awan’s statement comes against the backdrop of MQM chief Alatf Hussain’s statement calling on ‘patriotic’ generals to take ‘Martial Law like’ action against corrupt politicians.
Post Views: 796
Tags18th Amendment Altaf Hussain Martial Law Mian Iftikhar Hussain