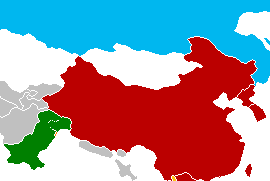 Pakistan is always in the news for reasons not necessarily as important as it may seem. By considering Pakistan an ally to the US in “War on Terror”, it is assumed that Pakistan has been taken on lease and as per the expectations of the Western media, Pakistan has to follow the tune set by US Establishment.

Pakistan has had excellent relations with China ever since both nations accepted each others existence. It is a friendship which has withstood tests of time. It is also important to note that it has not been one way traffic. Pakistan provided the much needed access to China onwards to the world and China has helped in using its might in improving and constructing a number of landmark projects.

Pakistan’s president, Asif Zardari wants to take the relationship of China and Pakistan to the next level by providing Chinese businesses the necessary enabling environment to complete major projects. And Why not? China has both the economic might and necessary soft corner in working with its neighbor in the South-West. China enjoys immense support at the people and establishment level in Pakistan.

In an op-ed in in New York Times, another attempt is being made to make Pakistani government and establishment at loggerheads with US. If China needs access through Pakistan, then by constructing tunnels and railroads and using Pakistan as a transit, isn’t it a win-win situation for both nations?

I personally feel, that we shouldn’t be discreet but more open in siding with China. With US, we have a strategic relationship which needs to last longer to give the people of Pakistan the necessary comfort to give up the “Amreeka bashing” that we witness amongst our right wing political parties and media.

As far as the US media is concerned, it should empathize with what Pakistan needs and how it can get it. If China wants something and is necessarily willing to invest for its own and Pakistan’s good, then what’s the problem?

While the world focuses on the flood-ravaged Indus River valley, a quiet geopolitical crisis is unfolding in the Himalayan borderlands of northern Pakistan, where Islamabad is handing over de facto control of the strategic Gilgit-Baltistan region in the northwest corner of disputed Kashmir to China.

The entire Pakistan-occupied western portion of Kashmir stretching from Gilgit in the north to Azad (Free) Kashmir in the south is closed to the world, in contrast to the media access that India permits in the eastern part, where it is combating a Pakistan-backed insurgency. But reports from a variety of foreign intelligence sources, Pakistani journalists and Pakistani human rights workers reveal two important new developments in Gilgit-Baltistan: a simmering rebellion against Pakistani rule and the influx of an estimated 7,000 to 11,000 soldiers of the People’s Liberation Army.

China wants a grip on the region to assure unfettered road and rail access to the Gulf through Pakistan. It takes 16 to 25 days for Chinese oil tankers to reach the Gulf. When high-speed rail and road links through Gilgit and Baltistan are completed, China will be able to transport cargo from Eastern China to the new Chinese-built Pakistani naval bases at Gwadar, Pasni and Ormara, just east of the Gulf, within 48 hours.

Many of the P.L.A. soldiers entering Gilgit-Baltistan are expected to work on the railroad. Some are extending the Karakoram Highway, built to link China’s Sinkiang Province with Pakistan. Others are working on dams, expressways and other projects.

Mystery surrounds the construction of 22 tunnels in secret locations where Pakistanis are barred. Tunnels would be necessary for a projected gas pipeline from Iran to China that would cross the Himalayas through Gilgit. But they could also be used for missile storage sites.

Until recently, the P.L.A. construction crews lived in temporary encampments and went home after completing their assignments. Now they are building big residential enclaves clearly designed for a long-term presence.

What is happening in the region matters to Washington for two reasons. Coupled with its support for the Taliban, Islamabad’s collusion in facilitating China’s access to the Gulf makes clear that Pakistan is not a U.S. “ally.” Equally important, the nascent revolt in the Gilgit-Baltistan region is a reminder that Kashmiri demands for autonomy on both sides of the cease-fire line would have to be addressed in a settlement.

Media attention has exposed the repression of the insurgency in the Indian-ruled Kashmir Valley. But if reporters could get into the Gilgit-Baltistan region and Azad Kashmir, they would find widespread, brutally-suppressed local movements for democratic rights and regional autonomy.

When the British partitioned South Asia in 1947, the maharajah who ruled Kashmir, including Gilgit and Baltistan, acceded to India. This set off intermittent conflict that ended with Indian control of the Kashmir Valley, the establishment of Pakistan-sponsored Free Kashmir in western Kashmir, and Pakistan’s occupation of Gilgit and Baltistan, where Sunni jihadi groups allied with the Pakistan Army have systematically terrorized the local Shiite Muslims.

Gilgit and Baltistan are in effect under military rule. Democratic activists there want a legislature and other institutions without restrictions like the ones imposed on Free Kashmir, where the elected legislature controls only 4 out of 56 subjects covered in the state constitution. The rest are under the jurisdiction of a “Kashmir Council” appointed by the president of Pakistan.

India gives more power to the state government in Srinagar; elections there are widely regarded as fair, and open discussion of demands for autonomy is permitted. But the Pakistan-abetted insurgency in the Kashmir Valley has added to tensions between Indian occupation forces and an assertive population seeking greater of local autonomy.

The United States is uniquely situated to play a moderating role in Kashmir, given its growing economic and military ties with India and Pakistan’s aid dependence on Washington. Such a role should be limited to quiet diplomacy. Washington should press New Delhi to resume autonomy negotiations with Kashmiri separatists. Success would put pressure on Islamabad for comparable concessions in Free Kashmir and Gilgit-Baltistan. In Pakistan, Washington should focus on getting Islamabad to stop aiding the insurgency in the Kashmir Valley and to give New Delhi a formal commitment that it will not annex Gilgit and Baltistan.

Precisely because the Gilgit-Baltistan region is so important to China, the United States, India and Pakistan should work together to make sure that it is not overwhelmed, like Tibet, by the Chinese behemoth.

Selig S. Harrison is director of the Asia Program at the Center for International Policy and a former South Asia bureau chief of The Washington Post.