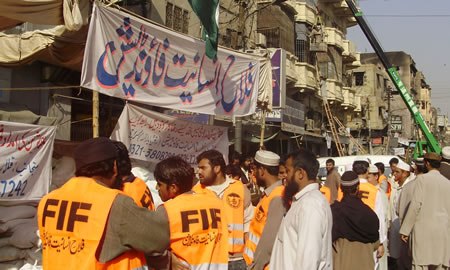 The floods are devastating. They have been called the most unprecedented disaster due to natural causes in recent years. Although there are some analysts who argue that this is not a natural disaster but a man-made one since the natural flood area of the Indus was encroached upon, this discussion perhaps needs to be postponed for now. Presently, energies need to be focused on the immediate relief and rehabilitation of the flood affectees.

The affected geographical area is about the size of Italy, with the UN chief declaring it the worst disaster that he has seen in his career. The devastation caused by the floods is believed to cumulatively have a greater disastrous impact than the Tsunami, the 2005 earthquake and the Haitian earthquake combined.

According to the National Disaster Management Authority (NDMA), more than 11 million people have been affected as 8,604 villages have been completely destroyed. Khyber Pakhtunkhwa is believed to be the most affected with eight of its districts devastated, followed by seven districts of Punjab, four districts of Sindh and areas of Balochistan, Kashmir and Gilgit-Baltistan. In short, the length and breadth of the country.

As if this were not enough, water-borne diseases now raise their ugly heads with over 100,000 children suffering from gastroenteritis and diarrhoea only in KP, not to mention other provinces. This is utter devastation but it does not stop here. Enter the militant organisations asking the flood victims to sell their souls to the devil. The militant organisations have been lightning quick to extend aid and assistance to the flood affectees just as they offered during the 2005 earthquake. Only the names on the banners are different.

According to my field research, affluent individuals are also donating to these organisations, primarily for two reasons. First, they do not know that these are banned organisations operating under new names and second, but more worrying, because, according to some responses that were received, it is believed that the militant organisations’ social services are excellent. In other words, while militant means are condemned by the respondents, their social delivery aspect is appreciated.

It is baffling that there is such a wilful ignorance and confusion amidst us. How many more have to die at the hands of these militant organisations for us to realise that we cannot differentiate between their stated cause and means? Social justice within a nation state cannot be had from a non-state actor. For this, one has to strengthen state institutions and not rely on speedy Taliban kangaroo courts. For social services provision, one cannot rely on militant organisations that make use of this social and economic deficit to buy our souls.

For instance, the modus operandi of the now Falah-e-Insayat is that it operates three hospitals, 34 dispensaries, fixed and mobile medical camps and 11 ambulance services. The patients and their families form an important catchment area for recruitment. It has more than 550 schools in key areas of the country. These schools are in addition to the madrassas that are operated by its affiliates. In these 550 schools, students are taught mathematics, science and English. The morning headlines are read out in the school assembly and students are encouraged to discuss them with the teachers plugging in to paint the context in militant colours. The organisation also has a huge publishing wing with a monthly magazine and the weekly paper separately having a circulation of over 140,000 with separate special periodicals for women and students.

The intelligent building of various aspects of the organisation and the way it has strategically managed to survive under various names through the years, succeeding in confusing people, is the result of the excellent manipulative skills of the group of teachers associated with Lahore University of Engineering and Technology in 1986, who founded this organisation. For anyone who seeks to romanticise their Robin Hood role, two statements should suffice. The organisation itself claims in its monthly magazine that, “it has assisted Taliban and al Qaeda in their fight against the US and the Northern Alliance in Afghanistan since December 2001.” The cannon fodder is, of course, provided by families who have benefited from their social services. Their worldview can be gauged from one of their leaders’ statements, Hafiz Saeed, at a 2004 conference where he reported that, “Pakistan should not be captured within its geographical limits. All Muslims from Ahmedabad, other parts of Gujarat, Hyderabad Deccan, Bihar, Bengal and Uttar Pradesh should be treated as Pakistanis. Pakistan’s atomic weapons programme is actually an instrument of Islam and not merely of the state of Pakistan.”

The need for all the government’s agencies to respond immediately and continuously to rehabilitate the flood victims is clear. However, one has to be wary of the militant organisation’s designs as the food they give is poisoned with their ideological medicine. The flood victims need to make a conscious choice between their today and tomorrow. If they accept the militant’s gloved hand today, then they should not cry tomorrow when even further devastation is caused due to terrorism. If you sleep with the enemy, you cannot cry rape later.

The writer is an Islamabad-based development consultant. She can be contacted at contact@individualland.com

Click here to post a comment
Pakhtun’s business in Karachi: suffers due to target killings – by Sohail Raza Khattak
“Ethical Codes for Media: Yes or No?”