Dr. Abbas Zaidi has shared this intellectual piece with us for LUBP. A slightly edited  version is published in Dailytimes today, we have posted it earlier from the newspaper, Now we are replacing it with the complete, unedited and original one directly sent by the writer.(aliarqam) 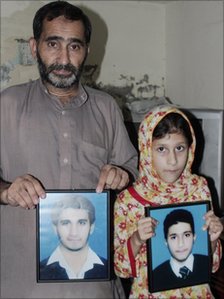 In the backdrop of the public lynching and then hanging of brothers Hafiz Mueez Butt and Muneeb Butt in Sialkot on 15 August, a journalist writing in an English language daily asked the following questions about the murderers:

(iii) Are they really Pakistani?

(The writer thought none of these.)

These questions are evidence of the lowest depth of misery, hollowness, and dishonesty to which some of Pakistani journalists have taken their profession to. Of course, these murderers are human, Muslim, and Pakistanis. The hollowness of the word “really” reminds me of Kurtz’s outburst of “The horror, the horror!” in the Conrad’s Heart of Darkness.

Why is so much hype about this lynching in both the media and the judiciary? Is it something came out of the outer space, so we cannot accept it? Don’t we human-Muslim-Pakistanis lynch and destroy unarmed people, even animals, while the entire nation and national institutions react from blatantly cheering on to finding crooked justification for our sins and crimes because “Muslims cannot do it!”, a mantra on the lips of everyone from Zardari, the secular and Gillani, the reconciliatory to Nawaz, the Amirul Mominin to Shahbaz, the Servant-in-Chief? Think about the journalists, the Islamists, the retired and quasi-retired bureaucrats and generals and the list will go on ad infinitum.

To the above three questions, add a highly arrogant claim which we the human-Muslim-Pakistanis make without fail while raising an objectionable eyebrow at non-Muslims: “We the Muslims never disrespect a corpse!” 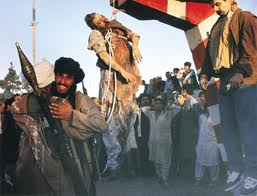 The Sialkot lynching is a mirror image of another lynching which we have conveniently forgotten. This takes us to 1994 when the Taliban, made and molded in and by Pakistan, invaded the UN-protected enclave in Kabul where they lynched Dr Najibullah and his brother. After lynching them publicly, just like their brethren have done in Sialkot, the Taliban hung the corpses of the two brothers and mutilated them; they even chopped off their private parts. At that time hundreds of people cheered on the Taliban as they disrespected the two corpses just like the hundreds of people did in Sialkot; the only difference being that there were no mobiles phones available at that time. Again, it is our “Pakistani” Taliban who Pakistan Army thinks are “good Taliban” who last year dug up a pir from his grave and hanged, and not just hung, him.

You can go a few more years earlier in 1984 when General Zia sent his notorious lashkar led and supervised by no other than Brigadier Musharraf aka General Musharraf, the enlightened, the moderate. This proto-Talibanic lashkar not just burnt alive hundreds of the Shias of Gilgit, it burnt alive the animals too owned by the Shias. Of course, this can be justified because those animals were not human, Muslim, or Pakistani.

The Sialkot lynching is not spontaneous. It is in fact a great tribute paid to General Zia who created the Islamofascist mindset with the help of Arabian money and Pakistani-sectarian manpower.

The Zia-sponsored and Islamists-created curriculum taught in Pakistan to this day has created a vision in which Muslims of a certain denomination are the only superior people in the world whose divine mission is to put the entire world on the righteous path by speech or sword depending on how quiescent or stubborn the people target for conversion are. Because Muslims can do no wrong, whatever Muslims do is right. General Zia and his accomplices created an Islam, which was unheard of in Pakistan, and since then that Islam has been creating us the human-Muslim-Pakistanis.

Thus, the very fundamental motivating principle of  human-Muslim-Pakistanis is that law has no meaning if it hinders our desires. We also know that the state of Pakistan has morphed into impotence, and accountability and rule of law are nonexistent.  From 1977 when General Zia dismissed Zulfiqar Ali Bhutto up to the Sialkot lynching, very few serious crimes have been punished.

Crime has become an easy choice because people know that

(i) they will never get justice, and

(ii) crime is not punished. Unless you are hopeless poor and unconnected, you are above law.

Zulfiqar Ali Bhutto is hanged and Benazir assassinated, and their murderers live honorably; lawyers assault journalists, judges, and policemen, but the judiciary takes no action; policemen kill innocent people and drag their dead bodies in the streets like trophies and are decorated with medals of bravery; journalists can demonize people at will and not be held responsible; murderous fatwas are proclaimed publicly and the bloodthirsty mullahs are addressed as ulema; billions are loaned from the banks and never returned and no questions asked. What message do people get?

In January this year, Prime Minister Gillani said on the floor of the parliament that despite the Supreme Court and the parliament, the Army cannot be held accountable for anything. Aren’t we repeatedly told and taught by the media, mullahs, and textbooks that we the human-Muslim-Pakistanis are soldiers of Islam? Haven’t a few top channels been running a vociferous campaign whose theme is “Hum Sab Sipahi!”: We are all soldiers!

The writer is a researcher and has a PhD in sociolinguistics. He can be reached at hellozaidi@gmail.com