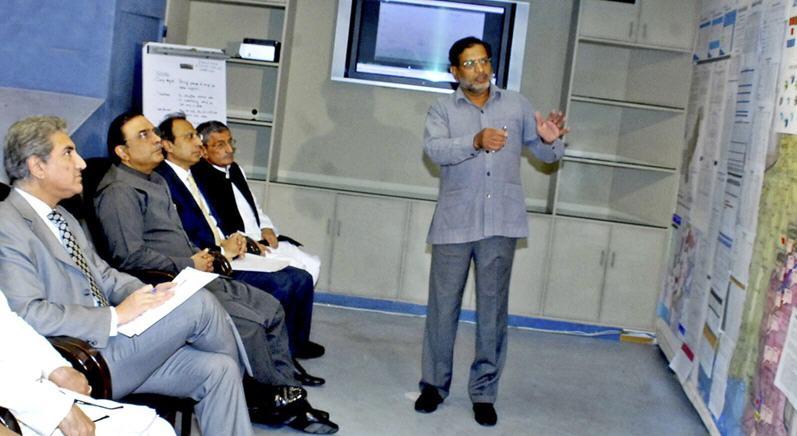 The world has never seen a calamity of this scale. One which has left thousands dead, many injured and millions homeless. It is the worst humanitarian crisis in the world presently, which has affected 20 million people. The floods have drained our villages and towns, destroyed roads and bridges, and smashed our schools, colleges and hospitals. Our fertile agricultural land is under water and there has been a great devastation to the country’s basic infrastructure by the recent floods. Tears have filled the eyes of fellow-Pakistanis and hearts are aching over the miseries of the ill-fated victims. In order to cope with the tragic situation, all sectors of society must come forward and contribute their efforts in offering relief to the victim families. Our brothers and sisters are crying out for shelter, food and medicine. “I have visited the scenes of many natural disasters around the world, but nothing like this. The scale of this disaster is so large, so many people in so many places, in so much need. Nearly one out of ten Pakistanis has been directly or indirectly affected—possibly 20 million people.” UN chief Ban Ki-moon said after visiting flood-affected areas. He appealed to the international community to contribute towards the wellbeing of the Pakistani flood victims. The government is leaving no stone unturned in drawing the attentions of the international community to this catastrophe. The president of Pakistan is on a diplomatic mission to appeal to the world for more and more support. “Pakistan will come out of this a stronger nation,” President Zardari said at a meeting with Russian President Dmitry Medvedev in southern Russia. “We have…the capabilities, we have the people, and all tragedies always unite nations. This tragedy will again unite us.” In personal visits to the flooded areas, the president has pledged to the flood victims that until they are completely rehabilitated, he would not breathe peacefully. In a meeting with members of some seventy NGOs, President Zardari urged NGOs, donors and humanitarians to lend a hand to the government and enhance its efforts to overcome the tragedies caused by the floods. The PPP government understands that political harmony is the need of the hour. To ensure that Prime Minister Syed Yusuf Raza Gillani met Mian Nawaz Sharif, the chief of the PML-N, and they both agreed on a joint effort for the rehabilitation of flooded areas. All political forces and corporate organisations are contributing their donations. The magnitude of the disaster is so large, and women and children are always the most vulnerable in floods, wars, famines and other natural and man-made calamities. Consequently, their health is at greater risk than that of men in a similar plight. Up to 3.5 million children are at high risk from fatal waterborne diseases, such as diarrhoea and dysentery. Diseases like typhoid, hepatitis A and E can also prey on them if the people from the affected areas were not vaccinated. The WHO is poised to assist nearly 140,000 people in case there is an outbreak of cholera. The Government of Pakistan is fully aware of all the myriad problems and is utilising all its energies in a multi-track effort. The government has launched a strong campaign for foreign assistance, and so far the pledged amount has risen to more than $352.52 million by the international community in aid. Apart from this amount the Prime Minister’s Relief Fund has been furnished with life-saving items and commodities, including medicine and tents. The United States has shown leadership in the world community in this effort, as have the United Kingdom and Saudi Arabia. Neighbours like Iran have also risen to the occasion. On Wednesday the European Union announced an additional 30 million euros ($39 million) in emergency relief assistance to flood-stricken Pakistan, bringing its total aid to 70 million Euros. The world is showing great compassion for the people of Pakistan and goodwill towards the democratic government. Regarding a potential food crisis a firm assurance has been given by the ministry of agriculture that in spite of the severe damage to our crops the country will not go through any food crisis throughout the year. One must single out for mention the role of the Pakistani military—army, navy and air force. Important arms of the government their officers and jawans have worked side-by-side with their civilian colleagues and shown the world that we are one nation. Our hopes are high and our efforts are diligent, and slowly we will come out of this crisis. The disaster must be turned into an opportunity to build a new Pakistan, one that is prosperous and progressive. The measured, steady and impressive way in which the present government defeated terrorists in Swat and is battling extremists today in every part of the country with both public will and military capabilities, is the same manner in which the flood catastrophe is being handled. “Pakistan will appear as a stronger nation from the flood tragedy that has triggered a massive humanitarian crisis. We have the capabilities, we have the people, and all tragedies always unite nations. This tragedy will again unite us,” President Zardari said at a meeting with Russian President Dmitry Medvedev in southern Russia earlier this week. The devastation is heavy, but our spirit and courage are superior. With high hopes and visionary strategies, one hopes the nation will soon start its return to normalcy, though much pain lies ahead. In times of challenges like this the coming together of our people is more important than any debate or argument politicians or intellectuals can frame.

The writer is a PPP MNA and media adviser to the co-chairman of the PPP.

Published in Daily The News,