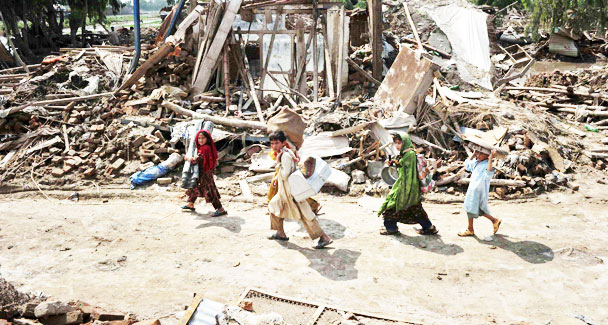 In an ideal world, a catastrophe that hits a country right down the middle is a sobering and binding event. The state quickly springs into action, with a two tier response-safeguard followed by rehabilitation. In case of a flood, there is urgent help sent to people to do whatever is necessary to safeguard peoples’ lives. This may be through blockading water, diverting flow if possible and mass evacuation. Since such a protection is a highly natural response to danger, most governments do this as first thing, with much deliberation.  Even people themselves try to do these evasion exercises. Only criticism is of speed of the response, how quickly could people been saved and if the most efficient methods were used.

Second is a bit harder exercise, which is of rehabilitation. This involves sustaining people and helping to nurture people back to their pre-event lives. Sustaining requires people to be given adequate food, shelter and clothing. In addition there is also need to protect from the elements, such as rain, heat, cold and disease.

Restoring people to their previous lives is even harder. But ideal governors are ready with a contingency plan. In Pakistan’s case say, people can be compensated for their loses by say having national identification system to verify a person’s origin, which would confirm their address and domicile. Further their property could be confirmed through the Land revenue and local government resources, which would show that person occupied certain piece of land and whether they indulged in commercial activities, such as agriculture farming, trading etc. A complaints tribunal, with certain magisterial powers, can be formed at district level for the people who feel that they have not been treated justly and there could be independent committee monitoring the activities of the tribunals at provincial and federal levels. Decisions of tribunals could be appealed to Session Court and so on following the court hierarchy.

Distribution process has to be based on loss basis, which is ascertained by formula of economic, property and personal loss. Distribution models that exist all over the world, can be observed and then applied to current scenario, see the calculation of economic loss at gulf of Mexico, property loss and Personal loss in Katrina, Bhopal etc.

Media could act as another independent watchdog, which also monitors the rehabilitation process minutely and broadcast progress reports to the rest of the world. In this way, maximum possible help could be provided to affected.

This of course what happens in an ideal world, but we live in Bizarro’ land … don’t we?
From the outset there was slow response (mainly because of denial?), while it is true that this was a ‘super flood’, as Prime Minister called it, our first response to it was, ‘urmm lets see how bad this is’ and once it got bad, we went ‘oh that is massive, am out!’ – Huge swathes of water going downriver where it joins into a bigger river and goes through most of the country to fall in to the sea, somehow became too difficult to comprehend. One can blame the government for being slow in reacting, but our bureaucracy, the crème de la crème of the country, didn’t come up with any suggestions either. Politicians get booted every so often and can be blamed for being rusty, what happens to the irrigation engineers working for decades in the government service?

Slowly response action is followed and people have been put in refuge camps, others are getting food drops and so on. Pakistan appealed to international community for aid, so as rehabilitate the affected people. Response, compared to other natural disasters has been slow, but steady. Finally the pledges met the UN target. But how would this money be distributed?

Federal and Provincial governments would form their own committees, not independent committees. These committees of politicians would oversee retribution done by the bureaucrats. Different provinces are choosing different methods, in Sindh for example NADRA would ascertain the losses and then the committee would pay these to affected. Apart from the many problems and limitations with this model, for example how would NADRA ascertain the economic losses, through their posh sounding names? There is also problem with lack of transparency.

Already there have been claims by many people that certain ministers protected their lands and houses, and diverted water to opponents’ lands. As usual there are claims and counter claims, but due to very little information either way they remain just that. Supporter of both ends are happy with their own justifications and media can’t be bothered to investigate into such a difficult terrain, nor can they be bothered to call up an expert, who can ascertain the judiciousness of such actions. Everyone is happy with the status quo, it’s out there, but no one knows if ‘it’ is true or not.

In the circumstances, transparency would be highly appreciated in distribution, so that people affected are given the aid as needed. We need to avoid a scenario where is aid given based on your political affiliations and strength of your ‘source’ – who you know.

Most people badly are affected are poor, illiterate and superstitious. Unlike the urban bourgeois who expect the government to send someone to tap them to burp and sing them to sleep, like a good little welfare state. The poor rural people don’t expect much, nor is anyone offering. It’s a hard-life and everyone has to fend for themselves. Such is the case that very few of people’s rights are given to them, and that too as a gratitude. For example Benazir income support or Zakat is given to the poor with much show and pomp, yet if one ascertains that number of hours in a day these people work and if fair wage, according to government budget recommendation, is given to these people, they would themselves be having to payout Zakat.

In any case, these people think of this as divine retribution, a happenstance. Something to take up on the chin and move forward. Many would try to get what they can, but mostly it would be done as gratitude for their unwavering political support. Most others would be left to their own devices, having to starve for years to come till their lands yield again. They would take loans at exorbitant interest from the money lenders or their feudal-lords and would spend generations paying them off.

Since none of the people in government have anything to gain from transparency, and much to gain from lack of it, guess what option they would opt?

Role of media as argued earlier can be positive in avoiding this scenario. But that is highly unlikely. The free market media acts more like a rabid dog, than a watchdog, barking and biting all and sundry but letting actual thieves stroll by. Like the deplorable incident in Sialkot shows, they’d move on to other things and come December, they would have to search in their history books to remind them of floods of summer 2010, or God’s wrath on poor people for elite’s misgivings, as they seem to call it.

The State media, which can be an even more potent source, lacks any teeth, being fully under the control of the government of the day. So don’t expect any locally made panorama investigations or 60 Minutes revelations. Again allegations would be made, and they would be countered. Some politicians would act, as they always do, honestly and others, as they always do, nefariously.

Now it doesn’t take a Ibn-Khuldun, anyone who has been alive know this is the drill. In light of above MQM chief’s comments that he would support a fauji intervention is obviously a political ploy. Fortunately Karachi and Hyderabad have been spared the wrath of this flood. If you look at it, most of the areas affected on the political map have been PPP, followed by ANP and PML-N areas. So the distribution of aid at local level would be done mostly by the MNAs and MPAs of these parties. Since it would be mostly on their discretion, some figure fudging is expected. MQM losses out on this. Now I don’t want to be too skeptical but he started it! As I read it, the leader was merely saying, give us a share or we’d call in the big boys. Since anything goes with them around, we can make sure our governor, the only likely remaining incumbent, would do the just distribution as we see fit.

Previously we have seen people being highly mobilised on issues of little consequence, petitions filed and streets blocked. Yet on issues that affect millions of people, we are going to let it pass, like we have done before. In a democracy, we get to choose our governments and thus their actions. This time around, we shall choose to stay put.