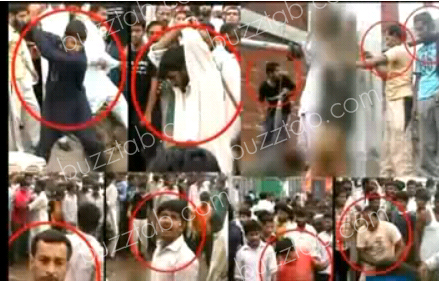 I was terrified when I saw disturbing pictures of an unruly mob beating two boys with sticks, killing them, hanging their bodies with poles and then parading their bodies in the back of a tractor trolley around the industrialized, progressive and apparently well managed city of Sialkot. The city which is known as Shehr-e-Iqbal and a place renowned world over for its quality sports goods, the heinous act negated one most repeated mantra: tolerance is bred by economic troubles.  What has happened is a blot on Sialkot, Punjab and Pakistan. The PML-N needs to pull its act together as this has happened in a city which is majority controlled by the party. The party’s senior leadership like Khwaja Asif, Ahsan Iqbal belong to this city. Being educated, urbane and suave, and demanding change in the way Pakistan is operating, I am sure they must be feeling terrible to see what transpired in their city.

Coming to what happened, let’s look at some points:

Why is only the police being blamed for their inaction? What about all the people who just looked on at the scenes and preferred to record the incident with naked eyes or their phone cameras? Was there not one or two sane people who could knock sense into the crowd? Could no one dare stop the attackers? Nations are built by the people and not police officers and judges. We as people have failed our country and the basis on which it was established.

The family had to approach the Supreme Court for their support. The Supreme Court has ordered Anti-Corruption Director General Justice (retd) Kazim Malik to investigate the matter with 1st September as the date for next hearing. I hope that the killers are all arrested and sentenced in the speediest of manner.

We must all condemn this gruesome incident and hope that this increasing level of intolerance in our society subsides. No way on earth can one kill another soul. Doing this in the month of Ramadan, what sort of people are we? Are we Muslims? For sure not.