Related article: What Pakistan did right in response to the massive floods in 2010 – by C. Christine Fair

The floods that wreaked havoc in the country were of Biblical proportions, however, they compare nothing to the propaganda unleashed upon the political ruling class of the 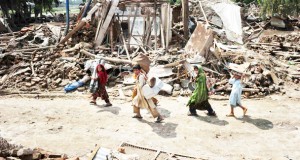 current setup by the independent media.

To the average urban Pakistani, now it is high time that we do away with this ‘incompetent regime’ which has failed to deliver the masses. The civilian leaders are a paradigm of corruption and worse, simply disinterested.

Their conviction is only strengthened when their ever so sincere media relays pictures of their even braver saviors who have come around to rescue those caught in the calamity. How shall we ever repay them (may I suggest some more plots in DHA), bellow anchors invoking the guilt of the educated middle class, not unlike in manner to a chain message which predicts bad fortune and God’s wrath upon those who will not pass them along to at least ten people.

The media, print and electronic alike have plunged into a 24/7 mission to tarnish the image of the present government led by the Pakistan Peoples Party and as always feign ignorance and surprise when someone points it out. Obviously if you give arguments for your case the media would either censor it altogether or go into a mad uproar. All the channels would instantaneously come to the rescue of their fraternity despite their utter yellow journalistic attitudes and sensationalizing of issues.

President Zardari went on a trip to Europe and media had a blast criticizing him for ten days. The visit’s coverage clearly exceeded that of the floods on most channels and 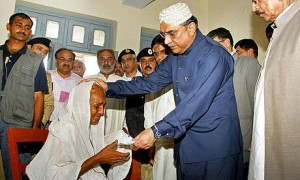 it was condemned across the board. But then, he came back and started visiting the flood affected areas. The opposition and anger started subsiding and soon the establishment had realized the folly of its campaign against Asif Ali Zardari. As it dawned on it that the real beneficiary of the event had become the Sharif brothers and even PM Gilani who were visiting the flood affected areas and taking personal part in the rescue efforts. Thus a new set of instructions were evidently dispatched to all the news channels.

The folly they realized was that it was imperative that people should lose faith in the entire political leadership. The campaign against PPP, was presenting PML-N as an alternative, hence more democracy and a sentiment to oust the government through the ballot box, be it mid-term or full term elections. This was unacceptable, as democratic traditions must be prevented from taking roots at all costs. The consistently held by-polls have done enough damage an ouster of government through election would have pulled the curtain of Martial Law Take 5 before it has been raised.

As if on cue, all footage of the Sharif brothers was taken off air. The pictures of Shahbaz Sharif touring the affected areas, suspending DCOs and admonishing officers while the senior Sharif made his way down the country were given a thumbs down. The PML-N joined PPP in being blamed for unpreparedness, lack of coordination and corruption previously unmatched. The media started questioning the credibility of government day and night, and than expressed amusement why the present government lacks credibility.

To them the present government is corrupt, but no proof is provided, except that international institutions say so. Transparency International’s ranking for the level of perceived corruption in Pakistan for years 2007,2008 and 2009 are 138, 134 and 139. The score hovering between 2.4 and 2.5 thus practically same as the previous regime, so what international organization is media getting its statistics from? Columnists and shamefully a few very esteemed ones have joined in calling for the appropriated national wealth to be returned by the politicians like Nawaz and Zardari who have assets of $ 1.4 and $1.8 billion respectively. No one knows where did the figures come from? They are certainly not on the list of Forbes billionaires, and their wealth statement does not say so, yet media slips in these figures continuously.

Through out the day private television channels are out on a crusade to malign the political setup. The first page of most newspapers talks about government’s lack of efforts. They blame the government for being unable to provide people with relief. The inadequacy of relief is a fact, what is fiction is that the reason for the inadequacy of relief is government’s slackness and ill-will. When the deputy speaker of the National Assembly spoke on a talk show that they had ten thousand tents in Dera Ismail Khan and require 37,000 more; the anchor delved into the usual drone about incapability of government.

The inadequacy of tents, food items and other amenities is that no country in the world has resources tied up in stocking tents for sheltering 20 million people. Hence, D.I.Khan got only 20% of tents it required because the tents in stock have to be distributed evenly across the affected areas.

Media fails to see any government efforts in the casualties in Khyber-Pakhtunkhwa being over thousand, where as the death toll in more densely populated Punjab and 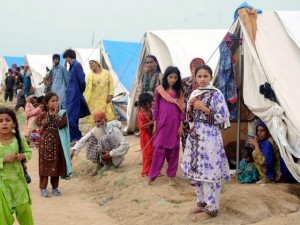 Sindh being 105 and 44. Obviously the credit for that goes to the saviors of the nation not the politicians. Their eagerness to avoid any pictures of the elected representatives means that apart from talk shows and the advertisements the government officials can be barely seen in news. What good would Salman Taseer ensuring relief efforts in Punjab do? Or the pictures of Qaim Ali Shah convincing hundreds of farmers that their land would be safe and it has been ensured that the records are safe with the thappedars? Or Faisal Karim Kundi, Hina Rabbani Khar, Khursheed Shah, Zulfikar Mirza, Pervaiz Rasheed, Zulfikar Khosa and hundreds of other office bearers who are personally present in the flood hit areas.

Deprived of any footage of laid back ministers or partying political elites, a new round of allegations was launched. Reports that various dikes had been broken purposefully for saving the lands of eminent few. With the land of Bhuttos and Zardaris ie Larkano and Nawabshah inundated by floods they continue to report such stories.

The new darling of the channels to support their argument is the former Prime Minister Mir Zafarullah Jamali. While his docility may have earned him a few nods of respect, his appearance on various talk shows and brutal distortion of facts could not be further from truth. He alleged and the media advocated how certain specific dikes were systematically cut so the farmlands of the Jhakranis and their corruption in the construction of Shahbaz Air Base can be can be saved. Obviously he was not asked that what did he do to curb such corruption when he became Prime Minister during the course of such construction, which please note was carried by the Americans themselves. Despite lack of proof or sense, Jamali sahab continues to appear on air disseminating false information among the general public.

The impact of media’s biased and falsified reporting of events is evident in the low local response to the PM Gilani as well as CM Shahbaz Sharif’s fund for flood victims. While the media continues to mold opinions in the living rooms of urban cadre, the distressed and affected can see for themselves who is present around them. An analyst once commented that the biggest problem of a dictator is that he does not have a constituency, sorry for the future aspirants the people of Muzaffargarh would vote for Jamshed Dasti again because he was with them in their time of need, so were Ijaz Jhakrani, Khursheed Shah and Faisal Karim Kundi.

While the politicians of the nation are beleaguered by the media, judiciary and establishment, they have done well to stay in their constituencies for all to see them present in person. The meeting of political leaders at all levels, the end to hostile statements in general and convening of the National Disaster Management Commission are all steps in the right direction. By declaring its allegiances openly the media has only imitated the Japanese at the Pearl Harbour, “they have won a great tactical victory and thereby lost a war.”

Tail piece: In yet another talk show a caller lamented the construction quality of bridges and roads destroyed (22 of 25 bridges in Swat were washed away), calling upon the Army to oversee the rebuilding and quality control. If only the poor soul knew that most of these bridges were in fact build by the NLC and FWO in the first place.