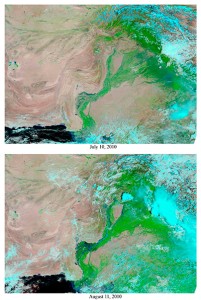 Pakistan is exposed to a multifaceted hazard situation, a perilous combination of geographical and socio-political factors. Physically it is exposed to vulnerabilities ranging from earthquakes, floods, droughts, cyclones, landslides etc. The physical milieu is entwined with an awful labyrinth of political instability, bursting population, poverty, sporadic religious and ethnic conflicts, terrorism, unbridled urbanization, and poor institutionalization. The vulnerability of Pakistan and its people to natural calamities is evident from the present floods, a colossal disaster of magnitude far greater than Tsunami and Earthquake 2005. The floods are the most frequently occurring disaster in the history of Pakistan. In the last 28 years Pakistan has seen 50 floods, during the 1973 floods more than 04 million people were affected while in 1976 floods affected around 06 million people and demolished over 10 million houses. In 1992 the floods affected about 10 million people and caused damage of Rs 50bn and in 1998 the floods resulted in damage to property to the tune of Rs17bn. The flooding occurred in 2001, 2003 and it again caused havoc in 2005 when more than 6 million people were affected.

Flood being the most recurrent phenomenon, managed to take attention of policy makers in late 60’s and a Flood Control Programme was launched for the first time. The plan also made its way into the 4th Five Year Plan (1970-75). The drafting of National Disaster Plan in 1974 by Federal Emergency Relief Cell can be identified as the first lucid effort which addressed different aspects of managing disasters. The plan envisaged procedures, organizational structures, identifying primary responsibilities, responder agencies, and procedures of monitoring relief operations. But the Plan was neither finalised nor implemented. Pakistan till 2005 had been following the conventional relief and response oriented model for coping and managing the risk of natural disasters. The cost of this conventional approach was visible from the appalling experience of earthquake in October 2005. The Earthquake of 2005 proved to be the watershed mark in changing the perceptions about managing disasters. The realization led to the promulgation of National Disaster Management Ordinance 20062. NDMO 2006 was issued under the legislative powers conferred in Article 144 of the Constitution of Islamic Republic of Pakistan [after being empowered by three provincial assemblies by passing resolutions (NWFP, Baluchistan & Punjab)]. The introduction of NDMO in 2006 can be termed as significant shift from a reactive model towards a more proactive pattern of governance based on Disaster Risk Reduction.

The national response to the earthquake of 2005 highlighted the institutional and legal deficiencies in the existing disaster management framework of Pakistan. Along with it was not compliant with the international policy imperatives like International Strategy for Disaster Reduction (ISDR) 1999 and Hyogo Framework for Action 2005-2015. The review and subsequent discussions and dialogues with multiple stakeholders at federal and all provincial levels resulted in the framing of NDMO, 2006. The challenge before the government and the legal team working on NDMO was to come up with a legal instrument that can:

State of present DRM framework in Pakistan and creation of an independent commission to oversee relief and rehabilitation operations in the flood-hit areas:

The NDMO 2006 provided National Disaster Management Commission as the apex body for managing disasters, with National disaster Management Authority as the administrative arm. The ordinance also established disaster management commission and authorities at provincial as well as district tiers. The working of the new DRM framework during past few years has revealed a number of inadequacies in the national disaster risk management structure which include issues in the legal framework, institutional and administrative complexities, lack of political support and engagement, lack of consultation and public participation, absence of DRM from public discourse, and transparency and accountability in the public financing of DRM. The issues no doubt merit serious consideration but the aspirations to set up another independent commission to oversee relief and rehabilitation operations in the flood-hit areas are not only peculiar but imprudent and injudicious. The present calamity of floods necessitates the nation and the government to go an extra mile for relief and rehabilitation, but the misfortune should not misdirect the decision making process. In the presence of a national disaster management framework creation of a parallel structure in form of a commission or body will only lead to a delayed and more fragmented response adding to misery and distress of the effected. The analysis of the proposal reveals that the assumptions on which the present proposal is being articulated are flimsy and unsubstantiated;

Trust Deficit of Donors and International Community on the existing disaster management framework:

Ownership of Present Disaster Framework by the donors and international community:

As mentioned earlier the existing national disaster management framework was framed not only due to national requirements for managing disasters but to comply with the international obligations1. The functioning of existing National Disaster Management Authority is fully supported by the international agencies especially UNDP in terms of funds and technical support. So it is surprising that how scraping the same or making it dysfunctional will attract the international donors?

Administrative Shortcomings of the proposed structure:

The workability and effectiveness of the proposed relief commission will be marred on account of overlapping and duplication of functions contemplated to be performed by it. Disaster response needs effective and efficient administrations the proposed body will be administratively dependent upon the existing disaster management structure at federal, provincial and district tiers, this will lead to delays in decision making as well as implementation.

The existing apex body for managing disasters is NDMC. The ordinance provides the constitution of the commission with Prime Minister as chairperson and including; Leader of the opposition in the Senate, Leader of the opposition in the National Assembly, Chief Ministers of all the provinces, Prime Minister of AJ&K, Governor KPK for FATA, Ministers for Defence, Health, Foreign Affairs, Social Welfare, Special Education, Communications, Interior, and Finance; Chief Executive (Chief Minister) Northern Areas; and Chairman Joint Chiefs of Staff Committee; thus making it not only broad based but having representation from all the provinces. In the presence of such a commission, formation of a new body is not only peculiar but imprudent and injudicious.

Establishing a Commission Comprising of People of Integrity:

So far as the inclusion of men of integrity is concerned, this can be addressed by invoking Section 3 sub section (p) of NDMO 2006, whereby the Chairperson (Prime Minister) can appoint representatives of the civil society or any other person to the National Commission. Therefore, instead of making a parallel body comprising people like Rana Bhagwan Das, Dr. Rizvi, Ali Ahmad Kurd, and Nasir Aslam Zahid, Abdul Sattar Edhi etc., the most appropriate solution is to include them in the commission under the given provisions.

Managing disasters is an area which calls for technical expertise, ranging from early warning, to rescue, relief, recovery and rehabilitation. The assessment, planning and phasing of different measures necessitates professional and methodological approach. If the present government feels handicapped on account of technical expertise to respond to the flood calamity the National Disaster Management Commission is authorised to constitute advisory committees for managing disasters comprising of experts in the fields of disasters

National Disaster Management Commission & its role:
1.NDMC is required to meet as and when necessary, The last meeting of NDMC was held on January 03, 2009; and the key decisions of the meeting included; integration of Civil Defence organisations, allocation of financial resources to the national and provincial disaster management funds, besides streamlining disaster management as a one-window operation, PM as Chairperson NDMC directed operationalising of provincial and district disaster management authorities July 1, 2009 and formation of building codes making violations a criminal offence. Unfortunately none was complied, neither the civil defence organisations were integrated nor the disaster management was streamlined as a one window operation. Most significantly the provincial disaster management authorities remained non operative. It is deplorable that since then no meeting of NDMC has been convened, even in the backdrop of present national calamity. Had the meeting been called the questions on the formation of an independent commission might not have been raised.

The existing disaster management framework has its shortcomings yet is a meaningful initiative which signifies a planned disaster risk management. Only strong and efficient institutions can help in managing disasters effectively. No matter how credible and honourable the members of the proposed commission may be, the existence of parallel structures will result in administrative inefficiency as well as misuse of funds resulting in a delayed and more fragmented response to the flood disaster. The strengthening of the existing institutions will not only instill the confidence of national and international community but will also alleviate the issues of transparency and efficiency

Click here to post a comment
Importance of a robust peoples’ movement in Punjab against the Punjabi Ruling Elite – by Asim Jaan
Pakistan Floods: What Ashu Lal says! -by Jehangir Hafsi