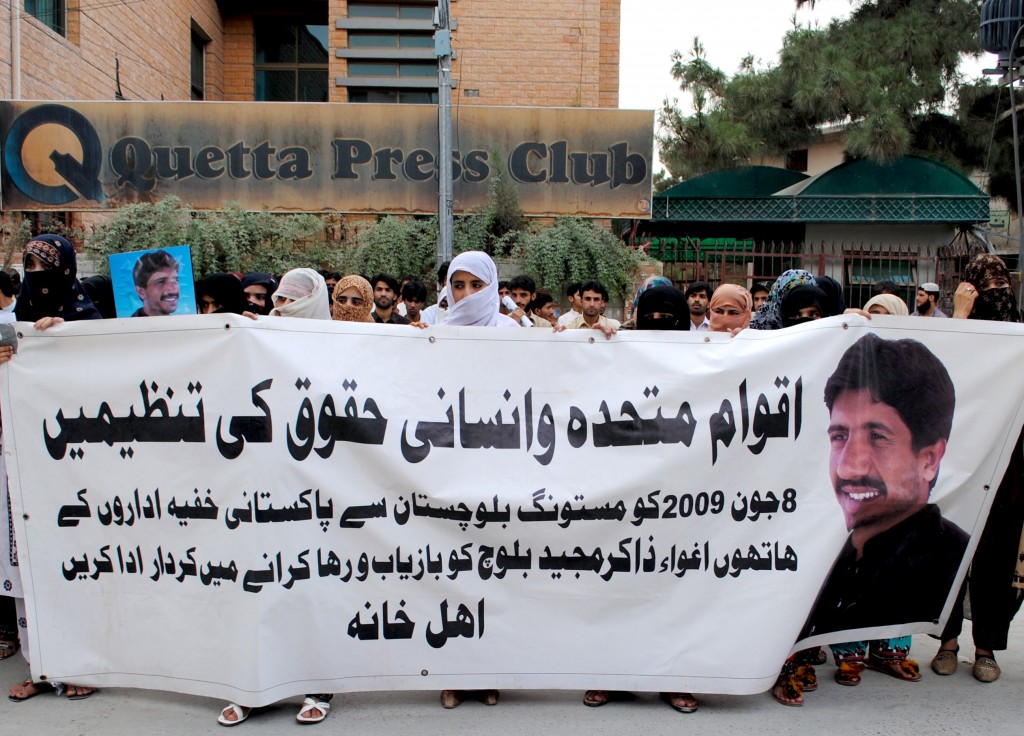 When on 8th of June, 2009 Mr. Zakir Majeed, Visce Chairman BSO(Azad) were accompanied along with his friends Mr. Waheed And Mr. Basit were on way proceeding from Parangabad market to his friend Mr. Abdul Waheed house situated at Mustung in Balochistan. Meanwhile security officials encircled them and forcibly on gun point whisked away Mr. Zakir Majeed. And put him in a car, they have got two cars without bearing any registered number. Both Basit and Waheed are star eyewitnesses of the illegal detention and abduction of Mr. Zakir Majeed.

HERE’S AN APPEAL TO FROM HIS FAMILY

We the family members of Mr. Zakir Majeed Baloch would like to invite the attention of world community and responsible organizations of United Nation particularly to the office of the high commissioner for Human Rights (OHCHIR) in respect of Mr. Zakir Majeeds enforced disappearance and illegal detention.

The fault with Mr. Zakir Majeed is that he is an intellectual and Human right activist and he courageously raised the voice against the atrocity and ruthlessness of Pakistan security establishment, at the hand of which the life of Baloch people are in hot water and facing hardship. When on 8th of June, 2009 Mr. Zakir Majeed were accompanied along with his friends Mr. Waheed And Mr.Basit were on way proceeding from Parangabad market to his friend Mr. Abdul Waheed house situated at Mustung in Balochistan. Meanwhile security officials encircled them and forcibly on gun point whisked away Mr. Zakir Majeed. And put him in a car, they have got two cars without bearing any registered number. Both Basit and Waheed are star eyewitnesses of the illegal detention and abduction of Mr. Zakir Majeed. It would be reasonable to mention here that the prime minister of Pakistan Syed Yousaf Raza Gillani when announced on the floor of National Assembly of Pakistan and pledged that all the missing Baloch political leaders, worker and Human right activist person shall be recovered and released before Eid ceremony, but the coercive and powerful security establishment did not pay attention, to the announcement of civil chief executive of country rather ridiculed it, however when Mr. Zakir Majeed abduction case was took up by United Nations working group on Enforced or Involuntary Disappearances (WGEID). Then malafidely, deliberately and with nefarious design the National Crisis management cell (NCMC) of Pakistan declared that Mr. Zakir Majeed has been released, which is rubbish. The declaration of notorious (NCMC) reveals that either Mr. Zakir Majeed has been murdered extra judicially or he is being subjected torture in cell of security establishment.

Until now there is non know whereabouts of Baloch thousands missing person including with Mr. Zakir Majeed, Because Baloch political and Human right activist, are under the awesome atrocity, colonial and terrorist state and Mr. Zakir majeed is one victim out of out of them who are in various form of torture in illegal custody and detention. In this connection the Asian Human rights commission statement is most important document, “The Asian Human Rights Commission urges the provincial government of Balochistan and federal government of Pakistan to secure the safe release of Mr. Zakir Majeed immediately. Since government officials have already confirmed Mr. Majeed’s safe release, we call upon these officials to be held accountable for these confirmations of safety, and urge these officials to take direct action to reunite Mr. Majeed with his family.” We are extremely concerned about the safety of Zakir Majeed, who is being held in the secret torture cells of Pakistani security establishment, and we fear that Zakir’s life is in under serious threats until he is not surfaced or released by Pakistan. In this regard we the family member of Mr. Zakir Majeed are on hunger strike Since to months in the front of Quetta press club.

Although Pakistan ratified the international covenant on civil and political rights (ICCPR) and the convention against torture (CAT) but unfortunately both of the instruments has not yet been implemented in letter and spirits. In pursuance of which the extra judicial killing, kidnapping enforced disappearance of Baloch political leaders, workers and human right activist are order of the day. It would be not out of place to mention here that in Pakistan violation of human rights and fundamental freedoms are in a alarming position, both the referred international instruments including convention for the protection of human Rights and fundamental Freedoms are being raped by Pakistan. This shocked the entire world’s conscience. The silence, negligence and miserable behavior of international community especially united nations and western civilized countries in itself questionable under international law. Pakistan being the state party of hereinabove mentioned instruments and signatory, during ratifying of the instrument ensured the world and states parties and undertakes to respect and also ensured that all individuals within its territory and subject to its jurisdiction the right recognized in the treaties and instruments. But despite of that the Convention for the protection and Human rights and Fundamental Freedoms are being flagrantly violated particularly the provision of Convention against Torture and Other Cruel, Inhuman or Degrading Treatment or Punishment. The referred international Convention and covenant are being grossly violated. As such under, every human being has the inherent right to life. This right shall be protected by law. No one shall be arbitrarily deprived of his life. But in Balochistan you can observe the ethnic cleansing of Baloch regularly. No one shall be subjected to torture or to cruel, in human or degrading treatment are punishment but you can find the baloch political leaders and workers are subjected torture in various army cantonments and have been mentally and physically paralyzed.

Everyone has the right to liberty and security of person. No one shall be subjected to arbitrary arrest or detention, in this respect Mr. Zakir Majeed case is a textbook, it would be pertinent to express here that eight thousands (8000) innocent Baloch are missing and they are in illegal custody of security establishment. Baloch are being arrested without any commission of crime and they have not been informed about the charge and also are not being brought before the competent courts, which is also violation of international norms, instrument and principle of international law. No one shall be held guilty of any criminal offence on account of any act or omission which did not constitute criminal offence, right to a fair trial, Freedom of expression right to an effective remedy. But the Baloch people have been arrested without due process and in the eye of law land the security official has no jurisdiction to arrest any citizen and they do not qualify the phrase of law enforcement agency but in spite of that fact they considered and treated themselves law enforcement agencies namely internal intelligence service (ISI), military intelligence (MI) and frontier core ( FC) are illegally arresting, extra judicial killing and kidnapping and detaining the Baloch innocent people.

Since the Baloch nation has been deprived from its national state and its land were divided amongst three states by British imperialist in the name of Gold smith and Durant lines respectively in Pakistan, Iran and Afghanistan. In the eye of international law and instrument Baloch has no locus standi to approach and knock the door of international court and organization because Baloch is neither a state party nor high contracting party, And for unfortunate Baloch there is no other option except then that to seek justice individually. Therefore this application is being filed under Article 34 of the Convention for the protection of Human rights and Fundamental Freedoms and international covenant on civil and political rights and R/W Article 22 (4) (CAT).

We want justice and we have a great expectation from the United Nation Human Rights Office of the high commissioner for Human Rights (OHCHIR). Justice to be done with us.If remediable justice does not provide us. Then (PIP’s recollection, in Charles Dickens great expectation will ring in our ears, when, says Pip there is nothing so finely perceived and finely felt, as injustice).

We are suffering from injustice at the hands of oppressors and Foreigners one of the day when we have been made colony and salves, our native land and resources have been forcibly occupied by the big Nations. In this spirit the modern thinker and economist Amartya Sen in his book ‘The Idea of Justice, called that concept ‘justice in the world of fish, where a big fish can freely devour a small fish. We can ask the civilized world and the institutions of United nation, whether the Baloch should not resist against awesome atrocity of oppressors and allow the big fish as alike Pakistan and Iran to devour us. Both are not big fish rather they are shark, being nuclear, irresponsible and theocratic States not only the existence of Baloch is in danger but also the entire world is on jeopardized and threat, in this what would be responsibility of civilized State and United Nation institutions? This shocked the entire world’s conscience. The silence, negligence and miserable behavior of international community especially united nations and western civilized countries are in itself questionable in the eye of new norms of international law.

We the family of Mr. Zakir Majeed humbly submit that we have approached all the domestic forum of Pakistan but they have not provided remedies, after all domestic remedies have been exhausted then this application is being filed inter alia that Pakistan has grossly violated the hereinabove referred international instruments and principle of international law in pursuance of which thousands innocent Baloch including Mr. Zakir Majeed are in illegal custody and detention of security establishment.

Keeping in view the above-mentioned circumstances and facts which established that Pakistan has violated the international law, instruments and conventions, in this context Pakistan may kindly be asked, to surface and produce Mr. Zakir Majeed Balochs before a competent court. In accordance with, International law and instruments.