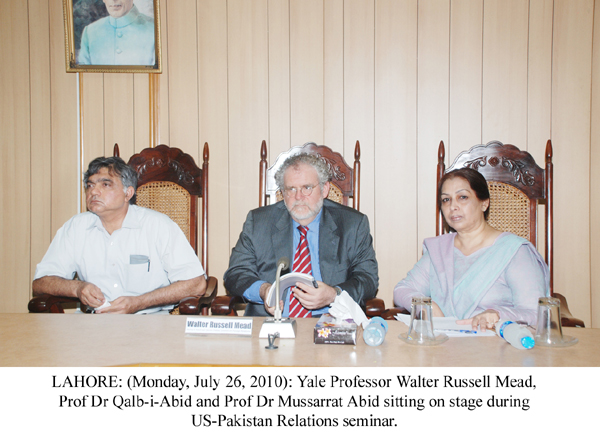 LAHORE, Aug 14: Pakistan should move away from the zero-sum security rivalry with India to be able to emerge as a successful, modern democratic society, says a distinguished American foreign policy expert.

“It is vital for Pakistan to shift its strategic focus from a dead-end losing competition with India to a developmental competition,” Prof Walter Russel Mead emphasised in an interview with Dawn during his recent visit to Lahore.

Prof  Mead is a former Henry Kissinger senior fellow for United States foreign policy at the Council on Foreign Relations and author of a number of books. He was in Pakistan for two weeks to participate in the US embassy’s programme of international speakers. During his visit, he spent a lot of time with students and teachers from different universities, journalists, military officials, analysts and others.

According to him, Pakistan’s struggle against India is also stopping its security establishment from completely severing its ties with extremist groups. “If you give up your relationship with these groups,” he argued, “the whole policy of confrontation with India becomes much more difficult to sustain.”

He did not agree with the theory that the relationship between Pakistan and India could not improve without a solution to Kashmir. “To some degree it is a question for Pakistan to ask itself. To say that without a resolution to the Kashmir issue Pakistan cannot prosper is to say that India has a veto power over the future of Pakistan, that India must give permission before Pakistan can launch its projects of development.

“I think militarization of Pakistan’s development over the last 60 years is the core,” he continued. “The distortion of development priorities that comes from enormous military burden and uneven struggle against a much bigger neighbour means that Pakistan’s development is slower than that could be otherwise. It has not affected India due to its size. The questionable groups are used as a balancing weapon just to discover that these balancing groups exacerbate internal problems. Violence makes peaceful development much harder. Cost of confrontation for Pakistan keeps rising.”

The award-winning author of “Special Providence: American Foreign Policy and How It Changed the World” and “God and Gold: Britain, America and the Making of the Modern World”

The expert pointed out that the US would like to see an agreed on solution over the future of Kashmir, which is also acceptable to its people. “But we neither can nor would impose a solution. We don’t have the ability or will. Some people in Pakistan have these unrealistic ideas about what the US government can accomplish.”

Yet, he said, it is clear that India and Pakistan are closer to a common vision on the future of Kashmir today than they were 40 years ago. “And there are some interesting proposals put on the table by both sides. Some people say they have come way close to the solution. One hopes that the progress continues.”

Asked about the recent American statements urging Pakistan to take action against Lashkar-i-Taiba and its allies, Prof Mead said: “I would expect the US to continue to raise this issue not because it is trying to be an agent of India here but because the US genuinely believes that any, even slight, cooperation between Pakistan’s security apparatus and this group is a threat to peace in the region.”

What does the burgeoning US-India relationship mean for Pakistan? Is the US getting ready to abandon Pakistan to India’s tender mercies? “That’s really not what we are trying to do. The future of this region includes a strong, vibrant developing Pakistan. The US likes to see Pakistan – like one of emerging countries – growing at 10 per cent a year and becoming more modern and successful by decade and decade. The Kerry-Lugar Bill, which pledges to provide Islamabad $7.5 billion over a period of five years, is shaped by this vision,” Mr Mead said.

But he candidly stated it is impossible for the US to ignore the rise of India. He quoted Henry Kissinger to describe the rise of India and China as “one of very rare historical event that would change the world”. “From the US point of view,” he elaborated, “the rise of India can be seen as fundamentally a benign force in the world. “The rise of India means the US doesn’t have to think so much about a war with China or a confrontation with China. With the rise of India you see a natural balance emerging in Asia with China, Japan and India.Any two of them are sufficient to keep the third from trying to dominate the region, and from the US standpoint it is a great benefit. You would be loser if you think that the US will be indifferent to the rise of India; we would like to promote it for this much larger issue.”

He said unlike most other countries, when the US thinks about foreign policy it tends to think about the globe, the world as a whole. “We don’t think Mexico and Canada are two most important foreign policy issues. Americans are so global and Pakistan is one of those countries which is most concerned about its regional environment and tends to think much less about the big global issues. So issues, global issues, the US cares about often don’t seem important to Pakistanis. The issues that are on top of Pakistan’s priority list come somewhere much low down for Americans.”

However, he insisted, in certain areas the “communication gap” between Americans and Pakistanis is closing. “I think the biggest gap between Americans and their Pakistani interlocutors had to do with this question of the world’s terrorist groups, religious extremist groups. And I think there has been a group in Pakistan that thought that these groups could be used as instruments of state policy and saw it as a regional issue. The US tended to think these extremist religious groups and the potential for global turmoil they represented like fire and once they start to burn you cannot control where they go. More recently as violence has come home tragically, there is much more sense among much wider sectors of society (in Pakistan) that these groups are a fundamental threat to order everywhere and you cannot play safely with them. I don’t say the gap is closed 100 per cent but there is a much deeper understanding of this danger of these forces and their uncontrollability.”

To another question, Prof Mead said that “there remains a strong sense that not everybody in the Pakistan government is telling everything they know about these (extremist) groups. And that is a real problem for the US – not a simple problem, a big problem.”

PDF: Report of the same event by APP