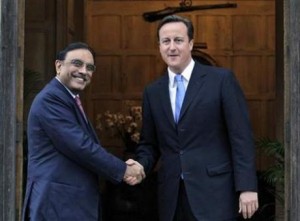 President Asif Ali Zardari’s visit to Europe has been successful in drawing the attention of the world community on the enormity the of the ravages of unprecedented floods in the country as well as forging international assistance for the flood victimsand highlighting the various challenges faced by the country. President told supporters his trip to Britain had been a success, and that he had raised tens of thousands of pounds for flood victims at home. More than 3,000 people crowded into the Birmingham convention center to listen to the great Pakistani leader.

Both leaders affirmed their commitment to further strengthen strategic and cooperative ties between the two countries by intensifying the UK-Pakistan Strategic Dialogue and confirming a yearly summit.. This Dialogue will deepen consultation on global and regional issues of peace and stability, will include people to people links, enhanced business investment and trade, collaboration in the education sector, and cultural and parliamentary links.

The two leaders welcomed the forthcoming launch of the British-Pakistan Foundation as an initiative to promote connections between our peoples and agreed that a strong, stable, secure and economically prosperous Pakistan is vital to global and regional peace and stability. In recognition of this, both leaders agreed to pursue closer development, economic and trade co-operation as part of the intensified Strategic Dialogue.

President underscored that Pakistan needs trade even more than aid. The Prime Minister said that the UK will continue to be Pakistan’s strongest ally in pursuing greater trade access to the EU for Pakistan. Prime Minister Cameron expressed UK’s support for Pakistan’s democratic government and expressed UK’s solidarity and support for Pakistan coping with the damage caused by recent floods. He also expressed condolences at the loss of precious lives and sympathy for the bereaved families. President Zardari expressed thanks for UK’s pledge of £10 million of immediate relief for flood victims and for accelerating an already agreed £10 million bridge reconstruction program.

Among the common challenges facing the UK and Pakistan is the fight against terrorism and violent extremism. Both leaders agreed that terrorism and extremism are global issues and needed to be combated by intensifying cooperation at the global and regional levels they discussed the role being played by the democratic government in fighting against terrorism. The Prime Minister recognised the sacrifices made by Pakistan’s military, civil law enforcement agencies and people in fighting violent extremism and militancy and appreciated the efforts of the democratic government. Both leaders appreciated the close co-operation that already exists between respective police forces and other security agencies.
The two leaders agreed that such co-operation needs to and will intensify. In this regard the British Home Secretary would visit Pakistan in the Autumn. They asked the Joint Working Group on Counter Terrorism to make proposals for enhancing practical co-operation ahead of the visit.
Pakistan and the UK will intensify their strategic engagement and pursue comprehensive sectoral track cooperation under the framework of a summit level strategic dialogue process. This will be taken forward through annual contact between the British Prime Minister and the President/Prime Minister of Pakistan. These Summit meetings will be reinforced through regular national security discussions. The two leaders looked forward to the meeting between Pakistani Foreign Minister Qureshi and British Foreign Minister William Hague under the revitalised Dialogue in October. The President invited the Prime Minister to make an early visit to Pakistan. The Prime Minister was pleased to accept.

“He is drumming up support internationally for the huge relief effort that is going to be required now in Pakistan and is going to be returning very soon. I think he is right to continue that visit.”

Misconceptions and accusations about PPP led government and president 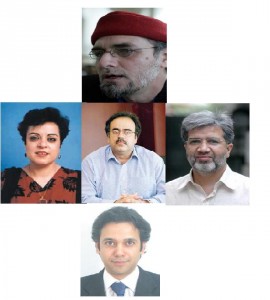 Asif Ali Zardari, regularly promoted by the mainstream media and even have been predicting, giving dates for fall of civilian elected government. By commenting negatively on everything they have psychologically turned this society in to a mental wreck.

Pakistani people are daily exposed to much bias, stupidities, insensitivities and distortion. Although, we are quite sure that people will not pay any heed to their propaganda, based on lies, hearsay and half truths-but it’s also media’s responsibility to avoid exaggerations, making people confuse, diverting attentions of people from the real issue and harming the democratic space. My dear friends, let the democracy evolve rather deteriorating each and everything by bringing it in media trial. Please give some space to fragile democracy of your country and blame the establishment which never assist democracy.

A handful of media owners[business tycoons]and spy agencies sponsored anchors are not only misleading but also giving a bad reputation to the entire nation, they are abuzz with conspiracy theories and their main aim is a conspiracy to target President. Many had propagated Chairman Bilawal Bhutto Zardari to join president at the rally and use the occasion to launch his political career, but the chairman rejected such speculation. Instead, he only appeared before the media briefly at Pakistan’s High Commission in London, where he accepted donations for flood victims and defended his father’s trip abroad during the disaster.

“My father’s doing all that he can to aid the people of Pakistan. His personal presence in Pakistan could not have done there what he did here,” Bilawal Bhutto Zardari told The Associated Press.

Ironically, it is a common practice of the media and it’s anchors and analysts to agitate and incite against president. Pakistani[anti democracy] media and it’s[Frankenstein]anchors proudly presenting and even rejoicing one mean and condemnable act. Instead highlighting significance of trip, media is projecting Shamim Khan as national hero, a person who violated ethics of politics. Is it responsible journalism? It just shows how media acts recklessly and irresponsibly. Pakistani media employing cheap methods of giving rise to misguided fear within the audiences at all levels and blackmailing various democratic entities by employing third grade journalism tactics such as news leveling and news sharpening has become a hallmark of the local media industry. Seriously, there is a need for some check and balance, because this monster is certainly spinning out of control!

It appears that the most TV channels are focusing more on marketing the news and their main issue is rating rather than reporting responsibly. None of these media channels for once thought of the implications of such irresponsible reporting, perhaps the only thing on their mind was to sensationalize the news and develop conspiracy theories. There is absolutely no justifications for the unethical coverage of one of the most shameful incident. Miserable reporting only draws more attention to the need of reinforcing media ethics and to form regulatory bodies monitoring violations.