“The much they hate Zardari, the more we love Zardari” the slogan I read over twitter by a worker of PPP. The comments on facebook attracted more I read “thanks to the opponents of PPP and Asif Ali Zardari for arousing the languid feelings of Bhutuism inside my soul as a result of their chauvinism”. 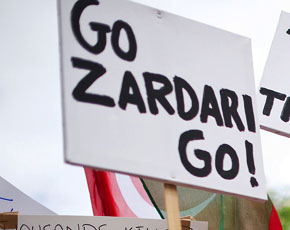 Forcibly ruling over bodies is possible but rule on hearts is thorny. Nasty Zia ruled on the people of Pakistan for more than a decade but he couldn’t create a place in hearts of the people. Today Zia is memorized for spitefulness while Bhutto is ruling over hearts and minds. The way conspirators are busier in inciting plots against presidency is perilous not only to the evolution of nascent democracy as well as will take the politics in 80s.President Zardari yet believes strongly on his policy of reconciliation and doesn’t want PPP be part of this negative game.

Some of our politicians and media persons (anchorpersons included) firstly raised a storm in the form of shaping new ‘ideas’ and “judgments” by criticizing President Asif Ali Zardari for his UK visit. When they came to know that President’s visit to France and UK proved of marker developments, then they went for a very shocking act of shaping the drama of “Shoe Throwing”.

Inciting plots against President the time when he was on an official visit on behalf of Pakistan is worst than all. The opponents of PPP left no chance missed in few days; scattered salt on flood victims by politicizing their deprivations for “Point Scoring”, attacked Pakistan’s diplomacy and at end an attempt they made on President persona. Personalizing national and political interests for own vested interests will shake the  policy of “Political Reconciliation” in Pakistan forever.

Zardari’s policy of reconciliation made possible the 18th Amendment, 7th NFC Award, renaming of KP, empowering Gilgit-Baltistan and Aghaz-e-Haqooq Baluchistan packages. The more President Zardari is fighting war against terrorism very bravery and boldly with national and international will and back up. Zardari fulfilled the dream of Shaheed Benazir Bhutto who had pledged of bringing peace in the valley of Swat and FATA.

It boggles my mind when the media created a hue about shoes being thrown at the President inside a meeting of the PPP. Can one ask as to how it is possible for one to throw shoes on the Co-chairman of a party in a gathering where thousands of his supporters are present? In an age when all carry a camera or a phone that has a camera, why wasn’t a single picture taken?

Information Minister Qamar Zaman Kaira and President’s Spokesperson Farhatullah Babar present at the event have firmly stated that they did not witness any alleged incident of a shoe thrown at the President. If anyone has any video clip or evidence of the charge, let they bring it before the media and nation, they both challenged. Hitherto the conspirators have failed in bringing any proof. Anyone who has watched live telecast of the President’s speech broadcast on all major news channels on Saturday didn’t show any disorder during the address of the President.

The people sitting on the stage with the President noticed no such disturbance. When Mr.Zardari was repeating the name of “Z.A Bhutto”, “Shaheed Benazir Bhutto”, “Shaheed Murtaza Bhutto” and “Shaheed Shehnawaz Bhutto”, the eyes of listeners got wet and some cried loudly. There was complete silence, when Asif Ali Zardari said “Without Zainab AS, Hussainiat is imperfect, likewise without Bibi Shaheed, Bhutoism is worthless”. It was a demonstrative crowd in the memoriam of martyrs of democracy. Bhuttos accepted death but neither wept before dictators nor left the country; they lived in people and died with people.

Very few people belonging to opposition political parties had certainly assembled outside the venue and were raising slogans against the President, which is their democratic right. PPP respects the positive criticism and welcomes the suggestions but strongly refuses conspiracies. But thousands of people sitting in the hall endorsed the President’s speech with full vigor and spirit. Our media gave excessive coverage to the outside in dozens but ignored the thousands inside.

This week has seen a number of slips by the hoity-toity intellectual elites who have been waging a media war against the President since the day he was elected. From the very beginning, before he had any opportunity to make any mistakes at all, cynics affirmed “the Present Zardari-led set-up” will not last long. Two and half years of the elected democratic coalition government completed but notorious all efforts went in vain.

Every day, they start with stirring new conspiracies against President but every nightfall beacons disappointment for them. They will burn in the feelings of envy as their forefathers had burnt. I am worried about their coming generations that “how they will cope with challenges of 21st century world with these lower outlook of covetousness and envy”?

President Zardari passes a smile over them and says “Opponents are unwise and don’t understand democracy”. He insists, “Let the conspirators do what they want and let me do my own so as to fulfill the dreams of Shaheed Bhuttos of a happy and prosperous Pakistan.