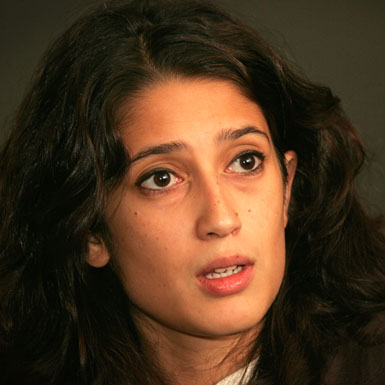 Pakistan may have lost a talented fiction writer when Fatima Bhutto went into journalism. Clearly, she is adept at spinning a tale, fudging facts and re-defining reality in a manner that is the exclusive domain of talented story tellers. Throw in her photogenic looks and her propensity to endear herself with the security establishment and she is the poster child for the ISI. This poor author does not share the same connections as Fatima Bhutto, so she will clearly not pass of (Fatima’s) alleged ISI links as established fact. Clearly, my humble perception was reinforced when I read her recent article, “Why my uncle Asif Ali Zardari’s rule in Pakistan cannot be trusted“.

The most outlandish spin in her article was that it was President Zardari who had banned facebook in Pakistan:”banned 500 websites — including YouTube, Facebook and Google — under the pretence of protesting against anti-Islamic material on the web” Two months ago, in their zeal to accommodate their political benefactors, Pakistan’s compromised Judiciary allowed for petitions that called for the banning of facebook and all the sites alluded to by Fatima. In their Islamist zeal, the Lahore High Court passed a judicial order that called for closing internet access to facebook. Zardari’s coalition government, already being lynched by the Judiciary had no choice but to comply. It is extremely disingenuous of Fatima to completely remove the context and the major instigators of internet censorship in Pakistan and place the blame on the President. The latter had already limited his role in governance by initiating and guiding the parliament to pass the 18th Amendment that gave back most executive powers to the Prime Minister and Chief Ministers! What Fatima completely fails to mention is that the temporary facebook banning in Pakistan had nothing to do with Zardari and everything to do a venal, compromised and politicized Judiciary that was returning favours to its Jamaat Islami backers.

This is the same Judiciary whose four senior judges, including the Chief Justice, were re-instated by the de facto ruler of Pakistan. What Fatima conveniently sidesteps is the reactionary movement that “restored the Judiciary” and that comprised of the Taliban, failed bourgeoisie “intellectuals and the North Punjabi political elite was put in place by the security establishment to pressurize the PPP into accepting its political diktat. However, this is not the narrative that one will hear from much of the reactionary middle class “intelligentsia” and certainly not from someone who is still undergoing a psychosis where she blames Zardari and the late Benazir Bhutto for the death of her father and uncle. Maybe some therapy is in order.

The rest of the article traverses a similar path of the same rehashed propaganda that is at times quite shoddy. It stays on script when it blames Zardari for his alleged looting of the country to the tune of 2-3 billion (the number is always variable and depends on the mood of the day and the accuser) and for all the violence in which the highest casualties are actually the secular nationalists who vote for the PPP or their coalition allies, the ANP.

Fatima rehashes the same tired Islamist apologies that condemn drone attacks against Al Qaeeda based militants that have held Pakistan’s Pushtun population as hostage without examining the role of these militias in killing thousands of innocent Pakistanis; especially the brutal attacks on Pakistan’s religious and sectarian minorities. She completely ignores the fact that these drone attacks have killed scores of foreign Islamist militants. Typically of the contemptuous attitude of Pakistan’s upper class elites, the alternative narrative of the Pushtun Nationalists, who have suffered the most from Taliban violence and who do not sympathize with the security establishment’s role in supporting the Taliban, finds no mention in her diatribe. For Pushtuns, the drone attacks are a necessary evil that killed significant members of the Taliban leadership, including the Pakistani Taliban chief, Baitullah Meshud just months ago. Offcourse, such facts would be an uncomfortable aberration in the cozy and simplistic narrative that is spouted by the likes of Fatima Bhutto and her urban elite counterparts and high society celebrities.

After all, her well articulated spiel is the trashy narrative that passes off as nationalism amongst Pakistan’s elite class who cling on to it every rotten lie and its interconnected edifice; an edifice that consists of millionaire media bigots, corrupt bureaucrats, violent mullahs and billionaire businessmen and the khakis who control all the shots. Her narrative is the impotent rage that the educated elites project into attacking Zardari as it prevents them from truly looking at the rot within and without.In throwing everything but the kitchen sink to trash her relatives, Fatima Bhutto stumbles into the realm of the absurd.

“The longer Zardari and his coterie are funded in the billions and welcomed by democratic governments, the longer Pakistan will remain hostage to obtuse political posturing, corruption and violent instability. Pakistan and the world cannot afford much more of the Zardaris in power.”News flash Fatima. Zardari and his “coterie” were elected; something that your faction of the party failed to achieve in three consecutive elections in spite of having the backing of your feudal relative and establishment toady, Mumtaz Bhutto; the same disgraced politician who betrayed your grand-father and who was instrumental in sending him to the gallows by collaborating with the then military dictator, Zia ul Haq against his own cousin. It may offend your sensibilities but democratic governments do welcome other nascent democratic governments and their representatives; a fact you many not understand given your predilection to support military dictators, directly and indirectly.

What do you propose if you don’t want Zardari in power; its not as though he came in another coup like Musharraf, Pakistan’s last military dictator whom you defended and supported in a 2008 article. Fatima also fails to mention that the billions that were promised to Pakistan via the Kerry Lugar Bill were part of the most heavily audited aid package ever given to Pakistan, most of which was routed directly to US aid agencies and not to “Zardari’s coterie”.

Ironically, the person who backed his political capital to support this bill was the much reviled Zardari, while the media took its cue from the security establishment and in the ensuing days, the PPP led government was nearly derailed for accepting the anti-Taliban, pro-democratic and anti-proliferation conditions of this bill. Fatima writes: “Zardari denied the meeting through unelected spokespeople”Unelected spokespeople!

Really Fatima.. Are you telling us that spokespeople have to be elected!!! Farhatullah Babar is a senior member of the PPP and is widely respected. I am sure if he stood in an election on the PPP ticket, he would trounce the candidate from your family run fiefdom quite handily as Khohro did in 2008. However, he does not have be elected to be a spokesperson. Neither do federal ministers and provincial ministers. They are chosen by elected representatives because of their ability to perform specific functions. You might want to look that up your father’s notes from Harvard and hope that he attended some lectures at their fabled school of government.

However, I think you will remain more comfortable in your palatial mansion in Clifton from where your step-mom kicked out your aunt, Benazir Bhutto, your feudal estates where your coterie of Ghinwa and Mumtaz disinherited Sanam Bhutto and Benazir’s kids of their rightful inheritance or in the cozy air conditioned environment of Pakistan’s premier elitist cafe and your favourite hangout, “Expresso”. There you and other shinning lights of Pakistan’s upper class elites can blow off the equivalent of half a months average salary of ordinary Pakistanis as you heap further slander on your dead aunt and the current elected leadership of Pakistan.

As you polish off the scrumptious carrot cake there, you can continue to rehash the same establishment propaganda where human rights are the exclusive domain of Aafia Siddiqui and the Taliban and corruption is the exclusive accusation solely against your murdered and lynched relatives and simply does not apply to your buddies whose parents made their fortunes by greasing the hands of the judiciary, avoiding taxes and getting exclusive business deals from those who wield the real power in this country; the establishment and its various subsidiaries against whose crimes, you and your class have never had the moral fibre and integrity, to protest and condemn.