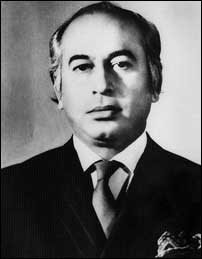 The last formal interview given to a journalist by Zulfikar Ali Bhutto took place on 10th August, 1977, just over a month after his overthrow and 33 days before his arrest, imprisonment, trial and execution on 4th April, 1979.

The journalist was Inam Aziz, who with Habibur Rehman, had been invited from London to meet Zia-ul-Haq. Inam Aziz, one of Pakistan’s great campaigning editors, was a known admirer of ZAB, which should have made him a persona non grata in the military government’s book, but those were early days and the regime was still trying to find its feet. On 8th August, Inam was in Lahore, the day ZAB landed to a welcome whose like the city had not accorded to anyone since Liu Shao-chi. While milling crowds were escorting Bhutto, who had just been released from “protective custody,” to Nawab Sadiq Hussain’s residence, Maulana Shah Ahmed Noorani, who was on his way to the airport, was waylaid, pulled out of his car, roughed up and made to shout ‘Jiye Bhutto’ by exuberant PPP workers.

Inam Aziz recounted his meeting with ZAB in Stop Press , a little-noticed but fascinating autobiography. During the Zia years, it was only his London-based Urdu daily Millat that continued to denounce military rule. It is another matter that when the PPP came to power, men like Inam Aziz found themselves banished from the camp of victory, but that is another story for another day. What follows is Inam Aziz’s recollection of ZAB’s last recorded interview.

He was taken to see Bhutto by Maulana Kausar Niazi. Bhutto with his photographic memory recognised Inam, greeting him by name, though he had only met him a couple of times. Inam presented Bhutto with a box of Havana cigars, one of which Bhutto lit up. The interview had barely begun when there was a phone call for Bhutto in the next room. When he returned fifteen minutes later, he was fuming. When Inam asked who had called, Bhutto said, “It was Zia and he threatened to kill me. I have told him that if I survive, I will have him and 35 of his generals hanged for treason.” After some time Bhutto said, “He held me responsible for the manhandling of Noorani. This is the first time he has been impertinent with me. When he came to see me in Murree, he could not stop ‘sirring’ me. Today there was arrogance in his voice.” When Inam remarked that Zia’s threat should be taken seriously, Bhutto drew at his cigar and said, “I am not afraid of death. I am a man of history and you cannot silence history.”

When Inam quoted Zia as saying that he would hold elections in 90 days and transfer power, Bhutto smiled, “You expect these people to hold elections! Don’t expect liars to speak the truth.” When Inam told him that Zia had cited God as a witness to his pledge to hold free and fair elections, Bhutto remarked, “That’s another of his lies. I have just told you about my conversation with him, so you can decide for yourself if there will ever be elections in this country.” When Inam asked him about his fall, Bhutto smiled and said, “To tell you the truth, I chose the wrong advisers. I have come to hate members of this pseudo-intellegensia who received favours from me but have now joined hands with the army.” On the rigging charge, he said he had not ordered it and only seven constituencies may have been involved.

Bhutto told Inam about the inquiry he had ordered into the rigging and the resulting 10-page report of which the army had a copy. The investigation had found that the American government was heavily involved in the post-election unrest. Hundreds of millions in PL-480 funds were spent to fuel the protest movement. In some mosques mullahs had been found with dollars. During the agitation, as soon as someone was injured, opposition parties would arrive on the scene and begin doling out money. The American embassy was orchestrating the effort. He added that the US embassy had been told that the government had evidence of American meddling and would like a meeting on the issue with the Secretary of State. Some days later, the US embassy replied that Secretary of State William Rogers would be in Paris for a NATO meeting and a representative could be sent to meet him.

The cabinet chose Aziz Ahmed, who arrived in Paris with the evidence. The meeting with Rogers took place at the American embassy, but whenever Aziz Ahmed would try to raise the issue of American interference, Rogers would tell him that the US and Pakistan being old friends, what had happened in the past should not impede the resumption of good relations. Whenever Aziz Ahmed would try to open his briefcase to reach for the documents he was carrying, Rogers would stop him and assure him that Pakistan would have no further cause for complaint. After the meeting, Aziz Ahmed left his briefcase with Ambassador Muzaffar Ali Qizalbash for safekeeping. When he returned to his hotel after attending a reception, he found his room vandalised. He called the manager who expressed shock and astonishment. Since Aziz Ahmed knew who his “visitors” had been, he decided against approaching the police. “Do you realise now what a clash with a big power can involve?” Bhutto asked Inam.

When Inam asked Bhutto what would happen if elections were held in 90 days, he replied that all the waderas and zamidars would be wiped out and even he would be finished as a wadera , but if the people felt that he would meet their aspirations, they would not reject him. When Inam asked him why the army was only able to stage coups in Pakistan and not in India, Bhutto replied that 85 per cent of the army comes from the Punjab, as does the bureaucracy. When the two join hands, political forces become helpless. He conceded that political forces, in order to protect their interests, often become tools in the hands of this army-civil combine. When Inam rose to take his leave, Bhutto said, “If you learn when you return to London that I am still alive, come back and we will meet.” When Inam replied that if Bhutto returned to power, people like him would not be able to get to see him, Bhutto replied, “I don’t think this time things are going to be like that.”

Bhutto, of course, never regained power and Inam Aziz died in London in 1993.

Click here to post a comment
A hero who died with his boots on: A tribute to Safwat Ghayur – by Ismail Khan
Karachi: PPP, MQM and ANP, Sensibility Please!!- by Muqtida Mansoor