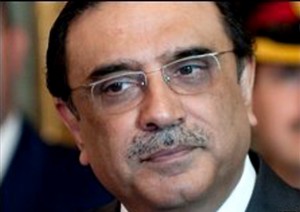 Asif Zardari’s callous and indifferent attitude to his country’s woes has reached ”Neroic” proportions surpassing even the worst reputation of Yahya Khan during 1971. He appearance in a designer suit and pink tie with David Cameron served to reinforce the image of a hedonist completely unmindful of the misfortunes of a poor and debt-ridden country whose 51 percent people live in poverty and whose lives are nothing more than a daily struggle to survive often at the risk of their lives.

Zardari’s attitude and persona is typical of that of Pakistan’s corrupt and westernized elites who have looted the country and accumulated ill-gotten wealth locally and abroad. By going around in Paris and London like he did when around 12 million Pakistanis have been affected by the worst floods in history, he has personified the tragedy of Pakistan – its selfish elites who would sell anything to pursue their personal interests. His escapade’s to Manoir de la Reine Blanche (Manor of the White Queen) — a 16th century chateau he reportedly owns in France, before he visited UK highlighted how out of touch Zardari is with the sentiments and lives of the people. Pakistan is a hollowed state where much of the fortunes and future of its most prominent political leaders are tied to the West. Nawaz Sharif and Shahbaz too own luxury apartments in London besides other interests abroad and MQM’s Altaf Hussain has been long beholden to the British for providing him a sanctuary and also their citizenship.

But let us not delude ourselves to believe that our Army leadership is any different when it comes to serving western interests and dancing to the tunes of the puppeteers in Washington and London. Zia and Musharraf were American puppets. Zia and his ISI Chief left fortunes for their families. Musharraf has been leading a comfortable life in London – the same Musharraf who mocked Benazir and Nawaz for living luxurious lives abroad.

One of Pakistan’s main causes of failure is similar to those experienced by many developing countries in the past. The nexus between corrupt local leaders and the West to serve their mutual interests at the cost of the often poor and impoverished masses and their future. Pakistanis will have to break this unholy alliance between the elites and the West if they want their country to be a self-respecting sovereign state that works to promote the interests of its people and not its Army or its corrupt and selfish elites.

The biggest mistake committed by our establishment and “moderately educated and enlightened” English-speaking chattering classes has been their refusal to see that military aggression by the US has been a major contributor to the radicalisation of public opinion in the Muslim countries, destruction of Iraq and Afghanistan, and the destabilisation of Pakistan that could lead to its Balkanisation. Anyone who points that out is labeled as a Taliban sympathizer. This myopia will ensure that we are doomed.

Non-violent political solution means not only Pak Army should not use militants as a policy tool but also the US stops playing the Great Game in Afghanistan simply because it can no longer afford to, as it belatedly seems to be realising. US policy and Pak Army’s “wonderland” view of the strategic depth constitute the core of the problem. Both the US and Pakistani establishments are in it together.

ISI acts as an extension of the CIA at a very high level in the Great Game, notwithstanding disagreements and turf battles. In view of the long history of close ties and cooperation between the Pentagon and Pakistan Army, particularly since 1980, The ISI-CIA conflict appears to be largely a charade for the world to justify the expanded military presence in the region otherwise why would the US Congress earmark one billion dollars for “new and larger” US Embassy facilities in Islamabad. Does anyone really can believe with a clear head that a weak country like Pakistan (that is so heavily dependent on the US Aid and the IMF) can carry on this double game for nearly a decade until and unless it also is part of the bigger game of the US. Such a belief would be a silly assumption in realpolitik.

The US officials were saying not too long ago that there was no difference between al Qaeda and the Taliban. Now they seem to be eager to reach out to the Taliban for a political settlement. If that was the objective, what was the fuss about al Qaeda being the biggest threat to the global security? Or was it not really but an excuse to build a military presence in Central Asia and Pakistan?

Baitullah Mahsud of TTP was guided by Mullah Omar as there was no difference between Afghan and Pakistani Talibans, claimed many US and Pakistani officials. But was it ever a secret that Omar was part of the Quetta Shura protected by the ISI. Who is trying to fool whom? Most Pakistani and Western analysts – many fed disinformation by the officials – can’t seem to think straight and see through the huge contradictions in the official positions of US and Pakistan.

How come Kayani (ISI Chief from 2004 to 2007) who presided over the resurgence of the Talibans on both sides of the Durand line during 2004 to 2007 and the worst violence during 2008 – 2010 during his tenure as Army Chief is so close to and favored by the Pentagon and not just that; the top US officials also supported the extension in his tenure.

This is nothing new or a conspiracy theory. Kayani has been favoured by the US for a long time. The Startfor, an influential US global intelligence company, reported on October 2, 2007 that “with President Gen. Pervez Musharraf due to step down as army chief by Nov. 15, Kayani will emerge as his successor, and given Kayani’s strong leadership credentials, Musharraf as a civilian president will be forced to share power with him.”

The New York Times ran a story “US is Looking past Musharraf in Case He Falls” on November 15, 2007 concluding that “at the top of that cadre is Gen. Ashfaq Parvez Kayani, General Musharraf’s designated successor as army chief. General Kayani is a moderate, pro-American infantry commander who is widely seen as commanding respect within the army and, within Western circles, as a potential alternative to General Musharraf.”

Given that Kayani’s rise had been well anticipated and he was the ISI Chief and Vice Chief of Army Staff during 2004-2007 before he became the Army Cheif, it is difficult and almost incredible to believe that he had no hand in Zardari’s rise to power. He must therefore share part if not the whole blame on thrusting upon Pakistan someone who is nothing but an embarassment to the country. If he did it under American pressure, that is even worse.

The crux of the matter is that we must disengage ourselves from fighting US’s proxy wars and battles in the region, which have cost us more than the all the aid that we received. We need a national debate on a fundamental shift in our foreign policy.

I have tried to provide a framework for a basic and fundamental shift in our strategic and defense priorities in articles written for DAWN since 2006. This shift will have to start from the foreign policy. We are heavily dependent on the West and this must change in recognition of the reality that it is not a unipolar world and China is financially the strongest country in the world.

We cannot afford to pursue policies that cause tensions with all of our immediate neighbours – India, Afghanistan, and Iran – and are viewed with skepticism and unease by the Chinese. They support us and put up with our “too close for comfort” relationship with Washington because they also need us, but they never liked our support for the Islamic militants nor our very close ties with Washington. Hence, while they gave us a token amount during the financial crunch in 2008, they in effect told us to get the money from the West (US/IMF) because that’s how Pakistan is perceived in Beijing; an old friend who is sleeping with a global adversary – America.

We can no longer afford to fancy that we have a role to play in the “Great Game” or that we need to control Afghanistan to protect our strategic interests from Indian designs. Let us face it. We cannot fight a war for even a short while – few weeks at best – because we will go bankrupt and we would have to accept humiliating cease-fire conditions dictated by Delhi and Washington. Kargil provided a miniature sample of this scenario.

Most of the arguments advanced by our so-called strategic and military analysts, who support the establishment, are based on ill-informed and short-sighted considerations and half-baked notions about security threats. Indian hawks may talk tough sometimes but there is no question, whatsoever, of a military aggression from India because she is a rising global economic power and would never jeopardize its economic growth and billions of dollars in investment flows to have a fight with Pakistan – which is a small but troublesome neighbour.

Given the periodic episodes of Pakistan-linked terrorist attacks in India, it does play games in Afghanistan – with the full US support – and along the border but their significance is overplayed by our establishment to justify wasteful spending on F-16s. In any event, F-16s or nuclear bombs do not provide security but economic development does and that we must learn from China. The Army must re-evaluate the balance between our relations with the US and China. For starters, its leadership should try to have as close a relationship with the top Chinese leaders as it has developed with Admiral Mullen.

More seriously, there are six articles that I wrote for DAWN during the last four years that you may wish to read in the above context:

First one was “The gathering storm and its implications” in August 2006, http://www.dawn.com/weekly/encounter/20060819/encounter3.htm

Second was “Setting the record straight” in November 2006, http://www.dawn.com/weekly/encounter/20061125/encounter3.htm

Fifth was the “Axis of trouble” in December 2009, http://www.dawn.com/wps/wcm/connect/dawn-content-library/dawn/news/pakistan/12-the+axis+of+trouble–bi-07

and the last was “Limits of military power” in March 2010, http://www.dawn.com/wps/wcm/connect/dawn-content-library/dawn/the-newspaper/editorial/limits-of-military-power-230