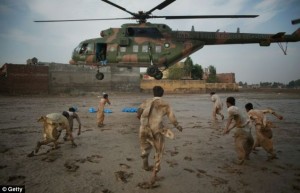 First published in The News
Global warming is causing increasing alarm because the rising global temperatures have the power to alter monsoon rain patterns. The recent floods that engulfed northern Pakistan have, in a way, not just affirmed the threat of weather aberration, but also spelled out its consequences. According to UNICEF, around three million people have been affected just in northern Pakistan, with 1,400 dead.

After the devastating earthquake of 2005, the National Disaster Management Committee (NDMC) was formed to deal with such situations. The NDMC is headed by the prime minister and it implements its decisions through the National Disaster Management Authority (NDMA) which is responsible for coordination between different stakeholders, including the ministry of defence and the provincial governments.

The recent floods were one of the first major tests for the NDMA. The intensity of the floods and the shortage of resources can be cited as valid reasons for the less-than-adequate response to the disaster, but the NDMA was also unable to fully utilise even those resources that were available.

For instance, consider the efforts undertaken to rescue marooned survivors. These survivors were stranded on structures such as buildings or electricity poles. Timing is critical in such situations as these structures are likely to give way due to damage to their foundations and bases. Helicopters provide the quickest means of rescue in such instances.

But as stated in the NDMA’s flood update of July 30, only 21 helicopters were deployed in the affected areas of Khyber-Pakhtunkhwa. As seen in media reports from the areas, this number was clearly inadequate given the scale and spread of the calamity. This weakness remains as the efforts move into the next phase: upper Swat and Kohistan are cut off from the rest of the country because of the total destruction of their road infrastructure.

More than 350,000 people need supplies for mere survival, and helicopters remain the only viable way of making these deliveries. But the Aug 1 update from the NDMA states that only 30 helicopters were engaged in Khyber-Pakhtunkhwa, of which 20 belonged to army.

This small number of helicopters would have been acceptable if these were all the helicopters that could be spared. But statistics from www.pakistanaviation.com show that in 2006 the army had 143 helicopters, of which at least 100 are of the sort that can be used for these operations. If the only helicopter at the disposal of the Punjab government can make the rounds at this hour of need, then surely the army could have spared more than just 20 helicopters. There can be no valid excuse for this underutilisation, especially when the cost of it is measured in terms of human lives.

There also is a relative sense of apathy among unaffected Pakistanis when it comes to donations for relief efforts. This is in sharp contrast to the outpouring of sympathy after the 2005 earthquake. In my opinion, a major catalyst in that united and concerted effort resulted from the focused and dedicated reporting from our electronic media then. Televised stories of survival and tragedy mobilised the whole nation into action; the urgent needs of the affected areas became breaking news, and the actions of volunteers across the country were assisted by information from TV news channels.

It was shocking that none of the mainstream Urdu news channels interrupted their regular programming to cover the initial phase of the floods disaster. This lack of focus came right after the non-stop coverage of the Airblue plane crash, an event that is dwarfed in magnitude by the calamity brought about by these floods. Some quarters say that alerts from the Pakistan Meteorological Department were not given due coverage by the media because of the extensive focus on the plane crash.

It also wasn’t that the other competing news items were of equal significance. For instance, on Aug 31, when the director general of the Provincial Disaster Management Authority of Khyber-Pakhtunkhwa was holding a press conference, none of the mainstream Urdu news channels chose to broadcast it live. Instead, there were talk shows lamenting the president’s upcoming visit to the UK and–believe it or not–comedy shows on two channels. Similarly, when the chief minister of Khyber-Pakhtunkhwa addressed his first post-disaster press conference, only one main channel broadcast it live. The sole exception in the initial phase of the flooding was a Pashto news channel, many of whose online callers lamented the apathy displayed by the Urdu media.

The role of the government was also very weak, the main alibi being that officials weren’t prepared for the magnitude of this flood. Even if we acknowledge that the intensity of the floods caught the government off guard, the post-realisation reaction left a lot to be desired. For instance, while the prime minister declared a day of mourning because of the plane crash, a similar acknowledgement was not given to the inundation of whole cities and towns. Similarly, the decision of the president not to cancel his trip to Europe stands in sharp contrast to the post-earthquake involvement of Gen Pervez Musharraf. Furthermore, leadership was desperately required in the ensuing chaos in the affected areas, but most elected officials from those areas were absent from their constituencies.

Lack of preparation was not only relative to the intensity of the floods. As the Annual Report of the NDMA for 2009 suggests, the agency that is responsible for the coordination of our response to disasters was given very low priority in financial allocations and disbursements. The NDMA apparently had to rely a lot on donor money in meeting the requirements of the Risk Management Framework. There are also instances where the NDMA was not disbursed funds that were approved by the prime minister and the NDMC.

Global warming is a phenomenon that will probably last the lifetime of most of us living today. This means that consequent disasters such as this one are very likely to occur again, and in the near future. Our response to the floods shows that we are unprepared for such calamities. The destruction caused by these disasters is much more than the dreaded bombing campaigns from our neighbouring countries. If we can dedicate Rs342 billion of our budget for protection against those threats, then we cannot leave the defence against these natural threats to the mercy of international donors.

Click here to post a comment
Legal Framework for Managing Disasters in Pakistan: Key Challenges -by Aley
Natural Disasters and the Terrorist Connection: Government needs to be on the watch!- by Aley