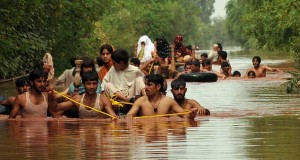 Apart from any kind of Political Difference “Human Life” is sacred! Today it was somebody else tomorrow it could be me. The life is long and completes its circle. Pakistani Intelligentsia should offer a Collective Funeral Prayers on Decency, Mercy, Consciousness and Compassion because not single TV Channel has stop its “Routine Musical Programs/Comedy Program” even now when Millions are homeless and more than 1000 are dead in Khyber Pakhtunkhwa.
Jurair Ibn `Abdullah reported that the Prophet (Peace be upon him) said: “Whoever is not merciful towards people, will not be treated mercifully by Allah.” [Note: Reported by Ahmed on a good authority, Al-Muntaqa (No.69), and Al-Haisami, vol.1, p.27]
Abu Musa reported that the Prophet (Peace be upon him) said: “You will not be true believers until you are merciful with one another.” They said: “O, Messenger of Allah, we are all merciful!” He said: “It is not that you should be merciful to each other, but you should also merciful in general.” [Note: Agreed upon, Al-Bukhari in Al-Adab and Muslim in Al-Fada`l]
`Abdullah Ibn `Amr reported that the Prophet (Peace be upon him) said: “The merciful are treated mercifully by the Merciful. Be merciful to those on earth so that Allah will be Merciful to you in the heavens.” [Note: Reported by Al-Tabarani, Al-Muntaqa, No. 1322, and Al-Haisami. vol.8, p.78] 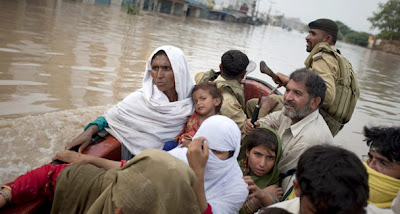 Hundreds of people have died in northwestern Pakistan after floods triggered by monsoon rains swept through the region. More than a million people have been affected and thousands forced to flee their homes as bloated rivers washed away villages and triggered devastating landslides. Rescue operations are under way to save the stranded, but submerged roads and destroyed infrastructure are proving to be major obstacles. Al Jazeera’s Sohail Rahman reports from Islamabad, Pakistan’s capital. [Courtesy: AlJazeera English]

PESHAWAR: The United Nations says devastating floods have affected 1 million people in Pakistan. Officials say floods have killed 430 people in the deadliest such disaster to hit the region since 1929. The U.N. Office for the Coordination of Humanitarian Affairs says the cost of damage from floods was not clear. Rescuers were using army helicopters, heavy trucks and boats to reach flood-hit areas. Government official Lutfur Rehman said Saturday floodwaters were receding in the northwest, but rescuers were facing problems reaching affected people because of damage caused to roads and bridges. The flooding capped an already deadly week in Pakistan. A passenger jet slammed into hills overlooking Islamabad killing all 152 people on board Wednesday.
REFERENCE: Floods affected one million in KP: UN Updated at: 1215 PST, Saturday, July 31, 2010
http://www.thenews.com.pk/updates.asp?id=109495
PESHAWAR: The death toll from massive floods in northwestern Pakistan rose to 1,100 Sunday as rescue workers struggled to save more than 27,000 people still trapped by the raging water, officials said. – Monsoon floods kill up to 800, affects 1 Million Rescue workers and troops in northwest Pakistan struggled Saturday to reach thousands of people affected by the country’s worst floods in living memory, as the death toll rose to 800. Hundreds of homes and vast swathes of farmland were destroyed in the northwest and Azad Jammu Kashmir (AJK), with the main highway to China reportedly cut and communities isolated as monsoon rains caused flash floods and landslides. The United Nations said almost a million people had been affected by the flooding, and at least 45 bridges destroyed around Khyber Pakhtunkhwa province. Television footage and photos shot from helicopters showed people clinging to the walls and roof tops of damaged houses as gushing waters rampaged through inundated villages. Carrying their belongings and with children on their shoulders, some even walked barefoot through the water to seek safety. “This is the worst ever flood in the province of Khyber Pakhtunkhwa in the country’s history,” provincial information minister Mian Iftikhar Hussain said.
REFERENCE: Floods affected one million in KP: UN Updated at: 1215 PST, Saturday, July 31, 2010
http://www.thenews.com.pk/updates.asp?id=109495
Death toll from floods rises to 1,100 Sunday, 01 Aug, 2010 http://www.dawn.com/wps/wcm/connect/dawn-content-library/dawn/news/pakistan/04-flood-toll-rises-qs-07
At least 410 killed, over 400,000 affected by KP flood By Zulfiqar Ali Saturday, 31 Jul, 2010 http://www.dawn.com/wps/wcm/connect/dawn-content-library/dawn/news/pakistan/04-flood-kp-ajk-qs-05
Rains floods Balochistan
Courtesy: DAWN NEWS
URL: http://www.youtube.com/watch?v=ix3cAdOyIz0&feature=player_embedded
balochistan floods

URL: http://www.youtube.com/watch?v=3JAISndQ4c8&feature=related
THE ABOVE VIDEO IS OLD AND SITUATION IN BALOCHISTAN IS STILL THE SAME
The Balochistan once again faces the flood with the destruction of various villages, localities and major crops. More than 50 people and hundreds of livestock deaths have been reported till date while hundreds are reported as missing. The Affected areas have rare approach to the communication and public transport, the national highway N65 has been damaged from various parts while train line has also been broken by the flood. Hundreds of families including new bourns, aged and ailing are bound to spend their time and seek for the help under the open sky without food and shelter. The Green Balochistan’s volunteer team visited the affected areas of District Sibbi, Nasirabad and Bolan on 23, 24 and 26th of July 2010. The condition of affected areas is getting most terrible and people are seriously looking for Food, Shelter & necessary medicines. [Courtesy: greenbalochistan http://www.youtube.com/watch?v=5P95YxREdGc]
Balochistan Flood 2010 – Courtesy GREEN Balochistan

URL: http://www.youtube.com/watch?v=2dBlLv048yg&feature=geosearch
Thousands of people were rendered homeless in Barkhan, Kohlu and Sibi. The disastrous Flood in the various areas of balochistan.
Flood in Barkhan – 2010

There is also a marked threat of outbreak of epidemics in the flood affected regions as there is a lack of food, clean water and medication leave alone substantial medicine and medical staff which are even unapproachable for easily-treatable cases of snake-bites that have been reported from villages but could not be treated as the rescue teams have not arrived or are short of medical articles such as snake-bite serum. The Wazirabad village of Bakhtiarabad in Lehri Tehsil is the worst-affected area and such is the situation there that dead bodies are decaying for nothing is available for neither the funeral nor the people to bury them. Over 57,000 people have been affected in Sibi, Lehri, Barkhan.The floods have damaged 90% of the houses, over 50% livestock and agriculture. And according to the district agriculture and revenue departments these floods have broken the past records of 1978. “In Tambo Tehsil of Nasirabad, more than 30,000 people have been made homeless while crops have been completely washed-out in the canal-irrigated area. Around 0.2 million people had been affected by floods in six districts of Balochistan where rescue and relief work had been slow and inadequate. Roads, power transmission lines and railway tracks have been destroyed in the district.

Reference: Uncoverings Of The Flood : Balochistan Govt’s Inaction : Are We Nurturing The Deprivation In Balochis?- by Hafsa Khawaja 28 July 2010 https://lubpak.net/archives/20161

Over 60,000 affected by flood in Balochistan By Saleem Shahid Friday, 30 Jul, 2010 http://www.dawn.com/wps/wcm/connect/dawn-content-library/dawn/the-newspaper/national/over-60,000-affected-by-flood-in-balochistan-070

A Compassionate appeal from a FB Friend, Awais Masood My dear urbanites, please do something for the victims of floods and plane crash. We can certainly do a lot but for heaven’s sake do not insult the victims by calling these calamities a ‘khudaee azaab’ since nobody deserves an ‘azaab’ more than your consumerist existence [Awais Masood]