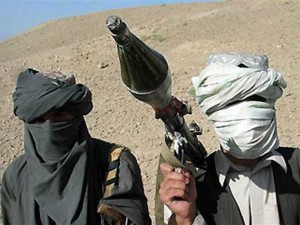 League-N (PMLN) – claimed that terrorism in Pakistan is a result of government’s foreign policies. Sharif made the commen

ts two days after two terrorist suicide bombers had attacked the most popular Sufi shrine in Punjab. The province that his party controls.

Nawaz Sharif and his party is believed to have ties to various terrorist organizations in the past. Sharif had alegedly met Osama Bin Laden, who funded his party to oppose and weaken the former Prime Minister Benazir Bhutto’s government.

On the other hand Imran Khan – the head of another right-wing political party Pakistan Tereek-e-Insaf (PTI) – also related terrorism in Pakistan to government’s alliance with United States. He Stated that:

This same rhetoric has also been used by religious parties to criticize the federal government of Pakistan Peoples Party. The religious parties along with PMLN and PTI has criticized the government’s decision to take the war to taliban’s doorsteps in Pakistan’s western bordders, and have suggested negotiations with the terrorist organizations as an alternative.

Every now and then the rightist – PMLN, PTI, and religious parties – cite unconfirmed news stories on Afghanistan and American government’s policy to negotiate with taliban as an example for Islamabad to follow. However in the past government of Pakistan has negotiated with the Pakistani Taliban, only to see negotiations fail, or the taliban breaking the agreement to further their aims.

Contrary to that, Pakistani taliban are not a political reality, but rather an illegal militia. There are no grounds for negotiations with the Pakistani taliban or any other terrorist organization inside Pakistan. They don’t have a constituency or a vote bank for that matter.

Although the Pakistani taliban cannot be negotiated with, there are political players which can be. For which Prime Minister Yousaf Raza Gillani has called for an APC (all parties conference). So the taliban’s like-minded political parties can also be consulted in a discussion to formulate a national anti-terror policy.

One can only hope that the rightist parties will not derail the agenda of the conference just to get their absurd anti-USA policy agreed upon. Rather focus on a strong policy that strictly deals with terrorism inside Pakistan and suggests ways to tackle it. Part of the solution would be for the right-wing parties to shun their alliances with any sort of extremist organization and allow government along with law enforcing agencies to take conclusive actions against those who operate on Pakistani soil.