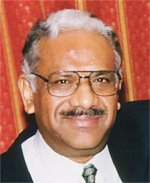 After having been stopped for writing defaming material against Riaz Laljee, the king of “churnalism”, Shaheen Sehbai has gone to court seeking damages from Azim Daultana for his article Differentiating between journalism and ‘churnalism’. Good going Sehbai sahab. Also see who’s representing him – Babar Sattar.

The notice also talks about suspicious blogs. I believe Pakistan Tea House and Let Us Build Pakistan are the ones that are suspicious.

I am happy to see him go to court. It will be a field day against Mr. Sehbai for his previous writings.

ISLAMABAD: PPP Parliamentary Secretary for Information, MNA Azeem Daultana, and two province-based newspapers have been served with a Rs100 million defamation notice by Group Editor of The News, Shaheen Sehbai, for making baseless allegations and casting aspersions on his professional career and personal character.

The notice has been served by Barrister Babar Sattar on behalf of his client under Sections 4 and 8 of the Defamation Ordinance, 2002 and gives two weeks to the respondents to retract their allegations, apologise and pay the damages.

The notice says Mr Sehbai is a veteran journalist, who has had an illustrious and distinguished 42-year career in the field of journalism. On May 30, 2010, the Editor-in-Chief of The News International received for publication from the Principal Information Officer of the Press Information Department an article entitled “Differentiating between journalism and ‘churnalism’”: a case study of Shaheen Sehbai’s (‘Defamatory Article’ authored by Azeem Daultana, PPP Parliamentary Secretary for Information).

Besides making several aspersions on the professional integrity, credentials, character and intentions of Shaheen Sehbai, the article specifically stated that Mr Sehbai “sought an ambassadorial position from Asif Ali Zardari and the PPP government and when Mr Zardari and the government denied him the coveted position and office of profit, he embarked upon a revenge mission against Mr Zardari.”

The PPP MNA was given an opportunity by Mr Sehbai to retract his baseless allegations through an e-mail dated June 12, 2010, within one week and tender an apology for the defamatory accusations. Instead of withdrawing the defamatory accusations and tendering an apology, the article by Mr Daultana was given wider dissemination and was published in two province-based newspapers, besides some suspicious blogs.

The notice says the contents of the article are baseless, reek of spite and malice and publication of the article is part of a campaign to throttle the attempts of proficient journalists to exercise their right to free speech and protect and defend the right of the people of Pakistan to information in larger public interest and hold public functionaries accountable.

“By reason of the aforementioned, you are hereby given notice under Section 8 of the Defamation Ordinance, 2002, of the intention of our client to bring an action for damages on account of defamation, unless you pay a sum of Rs100 million to our client as damages and publish in a conspicuous manner a retraction of the Defamatory Article against our client and communicate to our client an unqualified apology within two (02) weeks from today.

“If you fail to comply with this notice, legal proceedings for recovery of damages, at your risk and cost, for defamation shall be instituted against you in the court of law,” it says.

Click here to post a comment
Reforming the legislators: on the fake degrees – by Raza Rumi
Deobandi terrorists of Sipah-e-Sahaba rule the country while Pakistani leaders look the other way – by B. Raman