While many constitutional and legal experts as well as politicians of the PPP government have either shied away from or miserably failed in defending the rationale and necessity of the National Reconciliation Ordinance between Benazir Bhutto shaheed and General Pervez Musharraf, senior journalist Abbas Ather has, in the following series of articles, presented an excellent rational and defence of the NRO. The columns were written in 2009. A must read.

Abbas Ather’s articles are following by two further items: an editorial of Daily Times (1 November 2009) and a news report (October 2009), which demonstrate weaknesses in opportunist criticism of NRO by certain vested interests. 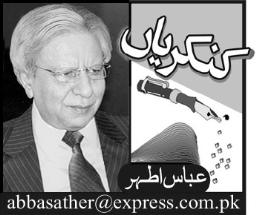 As the National Reconciliation Ordinance (NRO) makes its progress at the committee level before coming before parliament, the country’s polarised politics is boiling over. Walking out of the committee preparing the NRO bill, the PML-N has declared war on it. Laying out the party position, Punjab Chief Minister Shahbaz Sharif said Saturday that the passing of the NRO in parliament would be a defeat of the country.

First, there is the extra-parliamentary opposition, which did not take part in the 2008 elections because the polls were rendered invalid by Musharraf’s act of dismissing the Supreme Court in November 2007. The issuance of the NRO the previous month formed a part of the delegitimisation of the elections.

The PML-N went to the court against the NRO but took part in the 2008 elections, thus partially legitimising it. Then it showed respect for the ‘spirit’ of the NRO by briefly joining the PPP-led government. (A bunch of PPP MPAs are still hanging on to the Punjab government as remnants of that phase.) After that, political recidivism set in. The PML-N thought it would become more popular by being in the opposition. This has been proved right and the NRO is now anathema to most people in Pakistan.

The PML-Q, which midwifed Musharraf’s NRO, is now a purist on it. It is accusing the PML-N of secretly supporting the NRO, which is patently false if you look at the public posturing of our politicians. The lawyers, divided like everyone else, fight over whether an act passed by parliament can be struck down by the Supreme Court. The PPP will have a tough time mustering the required numbers, but from the way the opposition is fussed over the matter, it seems the act will be passed, and the Court will have to pull yet another undesirable political chestnut out of the fire. (Daily Times, Editorial, 1 Nov 2009)

LAHORE: Former president Pervez Musharraf on Saturday said all political forces of the country had been taken on board before the promulgation of the National Reconciliation Ordinance (NRO). Talking to a private TV channel, the former president said he did not want to indulge in the discussion on the NRO, however, he considered the ordinance’s basic purpose had been to eliminate cases against politicians. Separately, speaking with the channel, Pakistan Muslim League-Quaid President Chaudhry Shujaat Hussain said approving the NRO had been a mistake and he apologised to the nation. Shujaat said the ordinance was promulgated to create an environment of reconciliation in the country, adding he did not have the right to forgive the people who had embezzled money from the national exchequer. daily times monitor (25 October 2009, Daily Times, also reported in Pakistan Views).