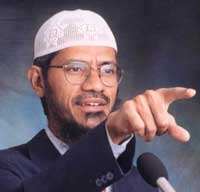 The majority of Pakistani, Indian and other Muslims living in the UK have welcomed the UK government’s ban on hate preacher Dr Zakir Naik’s entry to the United Kingdom.

British Secular Muslims welcomes the UK government’s ban on notorious sectarian and jihadi mullah Zakir Naik’s entry to the UK. The BSM also demands from the Indian Government to arrest Zakir Naik for spreading hate speech against Barelvi and Shia Muslims, Hindus, Christians and for also eulogizing acts of terrorism.

We also demand from the UK and Indian governments that Zakir Naik’s mouthpiece TV channels (including Peac TV in English and Urdu) must be banned for spreading hate speech and disinformation in the name of Islam.

An Indian Muslim preacher has been banned from entering the UK for his “unacceptable behaviour,” the home secretary says.

Zakir Naik, a 44-year-old television preacher, had been due to give a series of lectures in London and Sheffield.

Theresa May said that visiting the UK was “a privilege, not a right”.

The home secretary can stop people entering the UK if she believes there is a threat to national security, public order or the safety of citizens.

But she cannot ban people simply because of their views.

Ms May said: “Numerous comments made by Dr Naik are evidence to me of his unacceptable behaviour.

“Coming to the UK is a privilege, not a right and I am not willing to allow those who might not be conducive to the public good to enter the UK.

“Exclusion powers are very serious and no decision is taken lightly or as a method of stopping open debate on issues.”

This is the first person who has been excluded from the UK since Ms May became home secretary last month.

Mr Naik is based in Mumbai (Bombay) where he works for the Peace TV channel.

The BBC’s Sanjiv Buttoo says that he is recognised as an authority on Islam but also has a reputation for making disparaging remarks about other religions.

Peace TV itself describes him as “a medical doctor by professional training… and a dynamic international orator on Islam and comparative religion”.

Mrs May said the doctor was being excluded because repeated comments attributed to him was evidence of his ‘unacceptable behaviour’.
She said: ‘Coming to the UK is a privilege not a right, and I am not willing to allow those who might not be conducive to the public good to enter the UK.’
Home Office sources told The Daily Telegraph that website footage had shown the preacher making the claim that every Muslim should embrace terrorism.
Website footage is considered published material.
Dr Naik said Muslims should beware of people saying Osama bin Laden was right or wrong, adding: ‘If you ask my view, if given the truth, if he is fighting the enmies of Islam, I am for him.
‘If he is terrorising the terrorists, if he is terrorising America the terrorist, the biggest terrorist, every Muslim should be a terrorist.’
He is also reported as saying that western women make themselves ‘ more susceptible to rape’ by wearing revealing clothing.