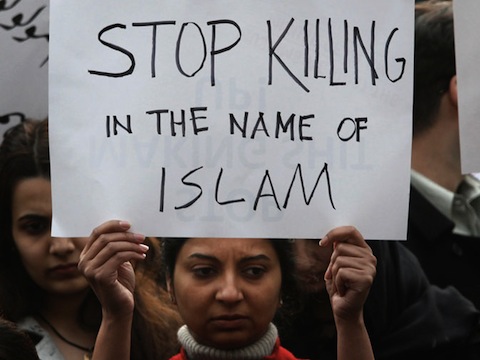 Though I wrote this blog last year when daring Salmaan Taseer was assassinated, hoping his death would not be just another to increase tally, but unfortunately things didn’t move an inch towards improvement, rather further deteriorated;  Shahbaz Bhatti was assassinated then, Shahbaz Taseer got abducted & is still missing. This is not all, lately we have been observing the same (old) deep state sponsored (non-state) actors been involved in shia genocide in almost every part of the country, targeted ahmadi persecution etc etc. The list is just endless!! Reading this old blog still makes me feel as if it happened yesterday only.

It seems as if Samuel Johnson, an English poet indeed has written the same for Salman Taseer’s brisk & manliness. Since the very beginning (of his canon), he has proved to be the man-with-balls; be it championing the gala with his political cum business rival(s) or getting vocal against the cruelty of the so-called sacred-law & exposing the very deeply embedded stubborn fanatical mentality of ours.
We are a proud de-mockery-see err democracy, with freedom of right to ‘speak’ (only & only for Pakistani-Islam, Arabs, aRabs & Bakistani-muslims & Moslems & ArabZ & Kul Muslimeen-0-muslimaat & Arub), right to choose (the rifle to kill infidels, apostates, paleets, green err black water, Zionists & their agents), right to put just anybody literally anybody under the scanner who points out the flaws among us, the-enemy-within etc etc etc.

He was already living a life of an apostate since 25th November when the champions of Pakistani-Islam Aalmi jamat Ahle sunnat issued him the same decree for what, for being loud & clear about the loophole in the law of Pakistan, mind it, he simply spoke against the defect in the law (obviously written & approved by ghaltion-ka-putla HUMAN), for the innocents who have been indicted for supposedly committing lesser offense or nothing at all. So the ferocious assassination of the MAN, brings no difference to the same shameless champions & their hawaris.

Few of our countrymen indeed didn’t get over from the painful demise & were still in the state of shock, it aired that our very own Ulema press not to offer HIS funeral prayers; courtesy Jamat Ahle Sunnat Pakistan (JASP). They have asked not to express regrets & sympathies over HIS vicious killing, and paying glowing tributes to Malik Mumtaz Hussain (& his sick nerve), who killed the MAN, they said he is lover of the Holy Prophet & that he is a ‘Ghazi’, plus Mumtaz had revived the 14-century-old tradition of Islam and put their head high in pride blah blah blah.

This tale of politically & technically correct Jiyala edifies us quite a few lessons to carry forward; the educated & civilized countrymen must always abide by the Aqwaal-e-Zarreen published by the boorish & inhuman radical clergy at seminaries, the intellectual & skilled countrymen if crave to enjoy some breathing space then better Pakistan se zinda bhaag. Our textbooks are already filled with lot of faux pas now should also remove the remaining which deludes our potential scholars with ‘Ink of an scholar is holier than the blood of martyr’, bullshit, ‘Bullet of a religious goon is holier than the whole learned erudite society’.

Hence, the potential BRAVE MEN better stay in their skin, live life with their gutsy-balls cut & follow the fanatical approach without asking any question. You have no right to question the Thekedaars err I mean Paasdaran-e-Islam in Pakistan.

Sadly, this atrocious butchery has also discouraged those who tried to burnish political-Islam from the very famously known extremist version of Islam.

Please please please, for heaven’s sake, save Islam from Pakistan, before it’s too late !!