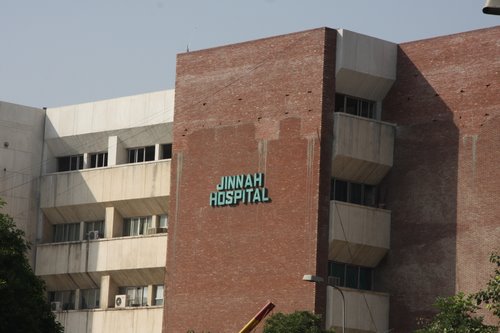 At least twelve people have been killed and 10 injured as suspected militants launched a brazen attack on Jinnah Hospital in Lahore late Monday night. Terrorists entered hospital premises in camouflage of police uniform. Five of the dead are police officers. The militant captured from Friday’s attack on the Ahmadi community’s place of worship was admitted to the intense care ward of the Jinnah hospital. Also many of those injured in Friday’s attack on Ahmadis are undergoing treatment in the hospital. Analysts suggest that this could be the prime motive behind the attack on the hospital.

The follow up to Fridays’ Lahore Ahmedi massacre, now madness has shifted its guns on the survivors of this tragedy. So far 12 people have been slaughtered. Now camel has entered the tent, no escape. Our beloved independent media, has given enough benefit of doubt to our dear murderers. These poor butchers after every successful carnage project yelled at the top of their lungs to get credit for their triumphant episode. Our independent media  analysts and religous leaders always tried to snatch away their success by pointing finger to the Jewish, Indian, American and Black Water agencies.

This always upset our beloved butchers, and these poor guys had to do a fresh killing spree on the hope that some day our media will give them the credit for this. So owing to the similar reasoning they are busy again in the Jinnah hospital of Lahore, at the time of this write-up. Hopefully our media does justice to them this time and give them their long deserved credit for all the efforts they have so far put in.

Enjoy the new Pakistan guys. Have fun. You asked for it.

Click here to post a comment
From judgment on PCO to case against 18th Amendment – by pejamistri
Is the Koran a constitution? – by Dr. Abbas Zaidi