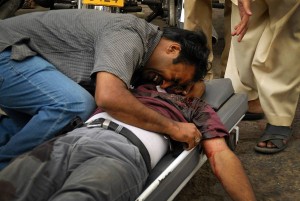 My condolences to the Ahmedia sect. I want to tell them that Pakistan is full of savages. These savages are indoctrinated, they cannot be argued or be reasoned with. They don’t know why they are doing it, but they will keep on doing it. After all, our ruling elite needed zombies to help us attain the strategic depth. The depth where we could hide our nuclear arsenal. But that depth needed some blood for our newly adopted pets. That was wiered but that’s how we defined the chemistry of our new savage pets. Not for a moment our ruling elite ( read Establishment ) had to sweat over the thought. They knew their was some cheap blood available. The blood of Shias, Christians and Ahmedis. Over each spell of blood donation the majority of Pakistanis were fed the loathsome commentaries and the carnage would be trivialized under the guise of ‘sectarianism’.

The weak political governments were always blind folded. They would be constantlty kepts in a state of insecurity of their own. Constant conspiracies would push the weak governmnets to forge alliances with very those elements who had a blood soaked past. That was the technique adopted for their survival during the temporary spells of democratic governments. The recent Judiciary and media activism is also targetting the moderate forces but at the same time it is acquitting the notorious sectarian criminals. The media plays down the similar unfortunate events and the public opinion is distrated with non-issues. Resulting in a repeitition of similar events. How can we ignore the bloodshed and loss of human life by overbeating corruption scandals. By this I am not favoring any corruption, if their are traces, the culprtits should be prosecuted but no..certainly not at the cost of human life. How can we ignore the massive killings? This ain’t right.

Click here to post a comment
LUBP vs PTUJ: Bol k lab azad hein tere – by Ahsan Abbas Rizvi
If I am missing – by Saeeda Diep