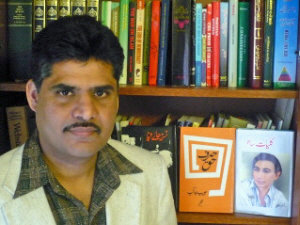 (InformPress.com OPINION-COMMENTARY) – Hamid Mir – Pakistani journalist, Executive Editor of Pakistan’s Geo News TV, Anchor of Geo’s Capital Talk television program and Columnist of daily Jang/The News International based in Islamabad, Pakistan – has pointed out to the Guardian, a daily rag of London, UK, that Husain Haqqani, an envoy of PPP’s infamous convicted criminal Asif Ali Zardari in Washington DC, USA, cunningly planted a fake and fictitious audio-clip in May 2010 in the LUBP defamation (libel and slander) website/blog of PPP to frame, blame and defame Hamid Mir.

In the PPP LUBP blog, the PPP media-press freedom abusers or free speech abusers have also written/published countless defamatory, derogatory, insulting, curse/swear/hateful, or dirty words against respected journalists, human rights advocates and intellectuals/ scholars, which they probably learned from their uncivilized families or obtained from this list or dictionary of Swear or Bad Words:
— Click this Web link: http://www.noswearing.com

All patriotic/nationalist Pakistanis should realize that the real purpose of the US, UK, NATO-ISAF, Israeli and Indian illegal/ fraudulent War of Terror against all Pakistanis, Afghans and Muslims is to break-up Pakistan into seven new countries – Punjab, Sindh, Khyber, FATA, Balochistan, Gilgit-Baltistan and Azad Kashmir – and steal or eliminate all nuclear weapons of Pakistan through the ruling PPP, MQM and ANP greedy traitors.

After receiving billions of dollars from American, British and Western
warlords – which were fraudulently stolen from Western taxpayers by
Western politicians to support/finance the Pakistani traitorous tyrants – the PPP, MQM and ANP rulers have divided the Pakistani Nation of over 180 million Pakistanis into many warring factions, sects and cults. Therefore, now the PPP, MQM and ANP corrupt traitors – who act like actors, mercenaries, or slaves of Western imperialists – are daily trying to disintegrate, break-up and destroy Pakistan for money.

Indeed, all corrupt, tyrannical and ruthless tyrants, generals and politicians of Pakistan – who have unlawfully murdered, injured, tortured, displaced and harmed millions of innocent Pakistani and Afghan civilians/citizens of Pakistan and Afghanistan – must be locked up in jails for their barbarous crimes (including crimes against journalists), corruption and frauds by Pakistani judges/justices or the United Nations international courts of law.

All current and former criminal rulers (politicians, generals, bureaucrats, diplomats and parliamentarians) of Pakistan can be arrested, prosecuted and punished for all their notorious crimes if millions of oppressed, persecuted and enslaved citizens – especially all real journalists, lawyers and other Pakistani professionals (including Hamid Mir, Syed Zaid Zaman Hamid, Ahmed Quraishi, Shireen Mazari, Dr. Shahid Masood, Ansar Abbasi, Shaheen Sehbai, Kamran Khan, Muhammad Saleh Zaafir and Pakistan Justice Movement Chairman Imran Khan) – vigorously refuse to tolerate the daily destruction of Pakistan by the PPP, MQM and ANP careless leaders. Some MQM and ANP activists have claimed in the past that MQM and ANP do not make the decisions, take the actions and implement the policies/orders of PPP’s megalomaniacal dictators. If their ridiculous claims are really true, then the MQM and the ANP must immediately end their support for or political alliances with the ruling PPP, so that the PPP’s corrupt dictatorship could fall down today and Pakistan could be saved from further or total destruction.

Dear people of Pakistan, speak out and act now like the people of Kyrgyzstan in a revolutionary way every day. Read the thought-provoking, educational and reformative poetry of Pakistan’s revolutionary or progressive poets – Faiz Ahmed Faiz, Ahmed Faraz, Habib Jalib, Sahir Ludhianvi and Allama Muhammad Iqbal – to learn or understand why you should topple the illegal corrupt tyranny of the PPP. Do you want to die like Afghans, Iraqis, Lebanese, Palestinians and Kashmiris in an enslaved Pakistan occupied by the US, UK, NATO-ISAF, Israeli and Indian armed forces, intelligence agencies,  mercenary war business contractors, war criminals and war profiteers? How long will you survive without electricity, clean drinking water, cooking gas, free healthcare insurance, free education, jobs, money, human rights, civil liberties, rule of just/fair laws, equal justice and other basic needs of life? If you fail to struggle today to remove all PPP corrupt tyrants from power, then tomorrow the PPP incompetent rulers will totally turn Pakistan into another Afghanistan, Iraq, or Palestine. Instead of living like slaves, break all your chains of slavery now to gain freedom, to end poverty and to first change and
then reform all the federal, provincial and local governments in Pakistan, the homeland of all Pakistanis.

The following are some excerpts from the Guardian news story of 17 May 2010, written by British bearded propagandist Declan Walsh from Lahore, Pakistan:

“Last month [April 2010] Khawaja’s bullet-pocked body was found on a
roadside in Waziristan [Pakistan] with a warning note to other ‘American spies’.”

“As debate about the [fabricated audio] tape swirled in media circles, [Hamid] Mir issued a strenuous denial saying the tape had been fabricated by his enemies in [the PPP] government to destroy his reputation and silence him.”

“I never said these things to these people. This is a concocted tape,” he told the Guardian. “They took my voice, sampled it and manufactured this conspiracy against me.”

“The [so-called] ‘Taliban’ [Pakistani or Afghan Pashtun students] added to the controversy by issuing a [press-media] statement that denied the tape was real.”

“[Hamid] Mir has vowed to take his critics to court, but for now the controversy is playing out on the pages of the Pakistani press. Mir said the [fake audiotape] recording had been doctored by the [Pakistan PPP-Controlled, corrupt and tyrannical Intelligence Bureau (IB) or by the] Federal Investigation Agency [FIA], a security agency” [operating under the command of PPP convicted criminal Abdul Rehman Malik, who is anti-Mir, because Hamid Mir, his colleague journalists (including Dr. Shahid Masood, Ansar Abbasi, Shaheen Sehbai, Kamran Khan, Muhammad Saleh Zaafir and many other journalists, writers and TV anchors) have persistently opposed, condemned and exposed the crimes, corruption and frauds of A. Rehman Malik and all other notorious PPP rulers/ministers (including the PPP president, Asif Ali Zardari, and the PPP PM, Yousuf Raza Gilani)].

“But he said the slurs had been politically orchestrated by the Punjab
[PPP] governor, Salmaan Taseer, and Pakistan’s [PPP] ambassador to the US, Husain Haqqani, who, he said, had released the [fake audio] tape on a [PPP LUBP] blog.”

“This [PPP LUBP] blog has a personal grudge against me and it is being
operated from Washington by our [PPP] ambassador, Husain Haqqani,” he said.

Haqqani said: “We do not dignify conspiracy theories with comment.” He
denied any role in the [fabricated audio] tape recording – [‘which might have been produced by PPP poisonous propagandist Salmaan Taseer and pro-PPP misleading disinformationist Rashed Rahman of the pro-PPP Daily Times rag in their pro-PPP Business Plus TV studio in Pakistan’, according to hearsay – but Husain Haqqani has refused to disclose that who actually created/recorded or planted the fictitious audiotape in the PPP LUBP blog].

“For too long we have protected our own,” said [pro-PPP Daily Times, pro-PPP reckless Editor Rashed] Rahman. “Now we have to speak out.” [Hamid] Mir said he was instituting legal proceedings against the [pro-PPP toilet paper] Daily Times.

Khalid Khawaja’s wife declined to comment. “I don’t want to say anything,” she said. “This is a very, very dirty conspiracy and I don’t want to indulge in it.”

The Capital Talk Facebook also states: “We are taking legal action against [pro-PPP] Daily Times (owned by Salmaan Taseer) and some US-based blogs supervised by Mr. Husain Haqqani for hatching a conspiracy against Hamid Mir by using a fabricated tape.” – 17 May 2010. –

KARACHI, Pakistan (Regional Times) – The PML-N leader, [Muhammad]
Hanif Abbasi, on Wednesday [19 May 2010] accused PPP’s Fauzia Wahab of declaring [PPP] president Asif Ali Zardari as the [real] killer of [his ex-wife, PPP Chairwoman] Benazir Bhutto. Talking in a talk show of [Pakistan’s] ARY News [TV], Hanif Abbasi disclosed that when Ms. Fauzia Wahab was not happy with the party’s [PPP] leadership, as she was not at the key post of the party, she declared [PPP] president Zardari as the killer of Benazir Bhutto during conversation with him.

On the occasion, Mr. Abbasi challenged that he can present himself in front of any court or can take an oath that Ms. Fauzia Wahab has said so. Fauzia Wahab has rejected the claims and said that she had never said anything like that. She said that Hanif Abbasi is leveling baseless allegations against her.

NOTE: Editor SYED ADEEB: “PPP megalomaniacal propagandist Fauzia Wahab once pointed out that PPP Co-Chairman Asif Ali Zardari is the real killer of his ex-wife, PPP ex-Chairwoman Benazir Bhutto, the PML-N MNA, Muhammad Hanif Abbasi, recently told Pakistan’s ARY News TV. Bilawal Zardari Bhutto, other relatives/friends of Benazir and the Pakistani police should deeply investigate this shocking or revealing statement of the PPP Central Information Secretary. If Zardari is the not the hidden murderer of Benazir, then why Zardari has intentionally failed to take any legal action against two current PPP ministers Abdul Rehman Malik and Zaheeruddin Babar Awan; two criminal fugitives, Pakistan Army’s ex-Chief/Military Dictator General (R) Pervez Musharraf and Brigadier (R) Ejaz Shah, ex-Director-General of the IB
and ex-ISI official, who were illegally allowed to run away from Pakistan by four PPP outlaws – Asif Zardari, Yousuf Gilani (also known as the Crime Minister or Beghairate Azam), Rehman Malik and Babar Awan; Military Intelligence (MI) ex-Chief, current Major-General Nadeem Ijaz Ahmad of the Pakistan Army; Punjab PML-Q Thief Minister Pervaiz Elahi; ex-Rawalpindi Police Chief Saud Aziz; and some other criminal culprits, who have been publicly accused by pro-PPP  advocates, other Pakistanis and the United Nations Commission of Inquiry’s 65-page report on Benazir’s murder as the suspected killers of Benazir Bhutto? Benazir was assassinated in her van at the Liaquat Bagh area in Rawalpindi, Pakistan, on 27 December 2007. Today is 21 May 2010. After suffering from over two years of the PPP Government’s
misrule over Pakistan, the Pakistani people (including PPP members, activists and voters) are still constantly asking that why all real killers of Benazir Bhutto have not been clearly, officially and legally identified or arrested. WHY? Indeed, they have the right to know that who really killed Ms. Benazir Bhutto and WHY? Where is the rule of law? Where is the accountability? Where is legal justice and equal treatment for all under the laws of Pakistan?”

5. State Circus of the Bizarre
http://www.nation.com.pk/pakistan-news-newspaper-daily-english-online/Opinions/Columns/19-May-2010/State-circus-of-the-bizarre