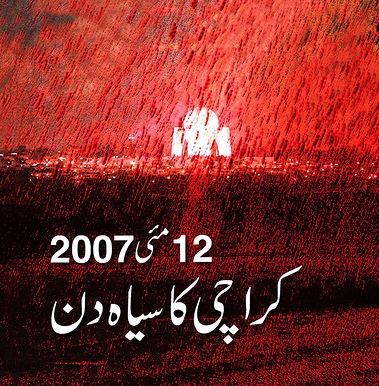 Today is the third anniversary of a black day in the history of Pakistan. As Information Secretary of PSF District Malir, I attended the rally of PPP towards airport from District Malir Karachi to receive Chief Justice Iftikhar Chaudhary. Sajid Jokhio ( Now Minister of Zakat and Usher, Sindh) and Raja Razzak (President District Malir PPP) were leading the rally. It is an unforgettable day for those who participated in various rallies to receive  Chief Justice and they were struggling for an independent judiciary.

I am an eye witness of the massacre which was carefully planned by those who did not want to see a successful rally in support of independent judiciary; they had got orders from their big boss in khaki, General Musharraf, who was at that time addressing the state-engineered ‘Istehkam-e-Pakistan’ (stability of Pakistan) rally in Islamabad.

Musharraf’s allies in Karachi, MQM, decided to stage a rally on the same date (ironically labelled as ‘Peace Rally’) in favour of the military dictator and against the ‘politicizing’ of the Chief Justice issue.

Clashes between political parties were anticipated by the media; it was clearly expressed in news, reviews and on-air discussions. However, the then provincial government of Sindh (MQM-PML-Q alliance) took no measures except closing educational institutions and declaring 12 May as a local public holiday.

Butchers of Karachi (everyone knows who they are) killed scores of innocent workers and supporters of the PPP, ANP and certain other parties on that. Their only crime was their participation in a rally in support of an independent judiciary and in condemnation of a military dictator.

Later, a plea was filed for judicial investigation of the 12th May incident but unfortunately it was rejected by the Supreme Court.

The 12 May rally in favour of independent judiciary took so many innocent lives; many members of the PPP, ANP and other political parties either lost their lives or were injured.

I personally blame Chief Justice Iftikhar Chaudhary for all this because the people were out there just because of him and they wanted him to be restored as Chief Justice of Pakistan to give them justice. Now what has he given to them after being restored? They are still facing injustice; those mothers, widows, sisters, brothers are still seeking for CJ’s help and justice.

Here is my message to CJ Iftikhar Chaudhry:

You and your ‘independent’ Supreme Court has given nothing to those who offered sacrifices for you and your independent judiciary. On the converse, what we see today is that you are only working on the orders of those who don’t want to see the democratic system in Pakistan. We need you to expose and punish the hands behind the 12th May massacre. Everyone knows them. Don’t you?

We as ordinary citizens of Pakistan still remember the martyred workers of all political parties, and all we can do is to pray for their souls. The PPP is organising Quran Khuwanis in different cities of Sindh today, but our so called independent judiciary (responsible for the 12 May tragedy) is still sleeping. You bartered blood of innocent political workers for a grade 22 seat in the Supreme Court. Shame on you, Chief Justice!

Related article: A CJ greeted in Karachi and the events of 12 May 2007