Raza Habib Raja has contributed this piece to LUBP which was previously published at Chowk. Here is Mr Raja’s brief introduction in his own words:

I am an economist by education and a banker by profession. I have enormous interest in political issues. Politically I am a moderate though slightly on the left side and have a staunch belief in skepticism. I avoid taking dogmatic positions on issues.

In the current era of media fueled urban politics, the issues most discussed on the media have tendency to take all the limelight. Once an issue assumes the status of a “rallying” point then political parties try to show adherence to the same in order to remain politically popular. Right now and increasingly after 9/11, US bashing supplemented by notions like national sovereignty and nuclear arsenal paranoia, have taken the centre stag. Historically the anti US sentiments had always been present but these were given a new vigor after 9/11. From that point onwards, the scale has increased to such an extent that it has become the sole paradigm through which we view the world. Right now as the case of Faisal Shezad has emerged, our media is again ranting the same mantra of a grand conspiracy of USA to “frame” Pakistan. 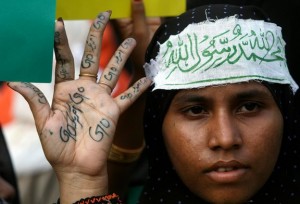 I would have casually dismissed this hatred as comic absurdity had it been a harmless thing. However, it is now bordering insanity and has made us completely oblivious to our own shortcomings. It is true that the current superpower is not an angel and historically has been an aggressor with imperialistic designs, but the way we are viewing things has seriously affected our own welfare and virtually made us unable to self introspect. Moreover, this trend is forcing political parties to reorient their focus increasingly towards irrational direction rather than deploying their energies towards real issues such as employment, power shortages, provincial autonomy etc. Since political parties and populace have a reciprocal relation with each other, right now it is like a self reinforcing spiral taking us to complete intellectual bankruptcy.

One has to see the evolution of this phenomenon after 9/11 to see its negative effects. I was in Karachi when 9/11 happened. As I watched TV coverage with my cousin, he was ecstatic and visibly showed his excitement that finally USA was being meted out the treatment it deserved. I objected that targeting civilians like this was not the right approach but was countered by the ever famous answer: “these people have killed Palestinians in the same way” and also that in the 2nd world war USA had used even nuclear bomb against Japan. “Those who target other’s civilians should be punished in the same way”, he remarked.

A few days later as the situation changed and gradually it became clear that USA was pointing fingers at Osama Bin laden and hence this region would be the focus of some kind of military action, the excitement gave away to accusation. The act which had made my cousin happy a few days ago was suddenly transformed into a “grand plan” by USA to have justification to come to this region.

His opinion actually was also the dominant opinion in those days in majority of the urbanities particularly those from Punjab and such views were increasingly being endorsed and promoted by newly emerging Media. Talk shows were in their infancy and mirroring the variants of what essentially was the same opinion. Of course, some variants were exceptionally more fantastic (one suggested that the WTC had explosives planted also which set off the moment the planes hit), but the basic premise remained the same: USA itself had executed the attacks to conjure up a justification to come to this region. The supreme justification was that since it had given them the opportunity to attack Afghanistan in retaliation therefore it had to be planned by them.

This mindset increasingly started to look like an alternative universe, where the devil was United States of America. Whatever USA said or endorsed had to be against us. It pointed fingers at Osama, therefore Osama had to be innocent. When the USA attacked and routed out Taliban, and evidence mounted that Osama had orchestrated 9/11 attacks, the interpretation changed to accommodate Osama as an agent (though still some doubt that he did it). USA could not be right and its interests could not be our interests, was the justification for these ever changing weird spins. When horrific atrocities of Taliban regime were brought to media attention those were simply dismissed as mere propaganda of the western powers.

The worst thing which happened was the Iraq war. It actually gave credibility to the foundations of this parallel universe. The devil of this universe actually behaved like a devil. I watched a raging debate on BBC when a labor backbencher pointed out that Britain by going into this war is merely going to alienate the moderate Muslim opinion. I knew inside my heart that he was right. When you are driven by instinctive hatred, you need very little evidence to stick to it. Iraq war provided much more than a flimsy justification. Suddenly, every weird theory found increased number of believers.

In near past, just because USA was forcing us to take a timely action the militants, we were all against it because in our heads it was against us and our “own” people. Those delays eventually enabled the militants to have a complete foothold in places like Swat. When news regarding the Taliban atrocities started to emerge, we refused to believe them because some of the western channels were also airing them. As late as 2009, when flogging video went on air, instead of being appalled, the entire media thrust was on proving that it was a fake. It had to be propaganda against Islam and us. The Nazam-e Adl deal was virtually endorsed by our media and a large section of sensation loving romantic nationalist urban middle class. And when ANP successfully maneuvered the situation to expose that militants were indeed animals, almost overnight they became bad Taliban who had been created by USA. We conveniently overlooked the fact that in fact USA had been pressurizing us to take action earlier and only a few days before we were reacting violently to opposition to Nazam-e-Adl by calling it interference in our internal affairs. And not surprisingly when reality dawned about Taliban by virtue of a live speech of Sufi Muhammad, we were quick to point out to the possibility of emergence of “Bad” Taliban. In this parallel universe every fact had to be spun to be consistent with the original premise.

This hatred has now reached such gigantic proportions that even when clearer evidence is presented in front of our eyes about what creed of people Taliban are, we are completely unable to condemn them. Instead we are either calling barbarism a reaction or trying to bifurcate them into good and bad Taliban. A “strategic” asset, created by our own armed forces and defended to madness by our own media, is now believed to be partially bought over by USA. USA the devil becomes our sole point and in that hatred we completely overlook where we are heading.

Since blame has to remain constant on them, now the “victims” of false propaganda in the past are provided an apologetic defense of poverty or “reaction” against US drone attacks. As blood litters our streets, rather than collectively denouncing the ideology of hate and barbarism, our sole reaction is pointing to the same premise in one way or the other. This sole reaction shows the depleted soul of the nation. We are ready to hold rallies when a few are killed due to a drone attack but speechless when literally hundreds are killed by the Taliban monsters. Rather than trying to fight the miserable creed of monsters we are coming up with new spins of national sovereignty, reaction to US policies, nuclear arsenal, grand conspiracy of US and God knows what else.  Consequently, it is becoming exceptionally difficult for the government to muster the political will to sustain this fight which is no longer physical. The hatred is misplaced, the enemy is within, but we are totally oblivious to it and in the process strengthening the forces of extremism through appeasement, apologetic defense or outright denial.

Right now it has to be understood that despite differences, at least in one critical aspect, USA’s and our interests are common: we face a common enemy. And yet just because they are saying it, we are opposing it and in the process treading on a self destructive path. Our every new interpretation is contradictory to the previous one, but it does not matter; because irrational instincts are driving our introspection. It stretches beyond that. Anyone who opposes Taliban vehemently and does not buy these wild theories is labeled as an unpatriotic, liberal elitist or someone who is a sellout. 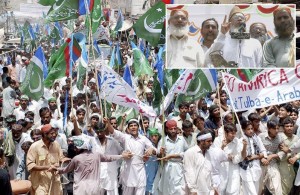 The effects of this mindset, if unchecked, will go beyond the current battle against Taliban. As the anti US rhetoric is whipped into frenzy and becomes a popular rallying point, the politics will no longer be an art of identifying core issues and striving to address them but merely expanding the borders of this parallel universe. An open and intellectually honest society should have the moral courage to look into itself also rather than blaming each and everything to USA. We are in dire need of that spirit of self introspection.