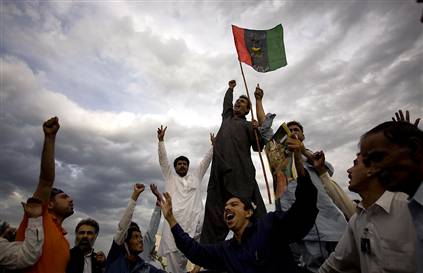 This note was recieved by the LUBP from one its senior readers, Chaudhary Ahmed Khan, as a response to Raza Habib’s posts on Pak Tea House and Chowk, and Samad Khurrum’s letter to LUBP.

On reading Raza Raja Habib’s article “Traitors and Reactionaries: Dedicated to Hamid Gul and Nadeem Farooq Paracha”, one thing is clear amidst all the clarifications by the author himself and that is the confused state of mind of Pakistan’s upper middle class.  His piece, obviously motivated by Nadeem F. Paracha’s  “We Shall Overrun” tries to aspire to satire but ends up as just another bitter rant against the PPP and in defense of a discredited and chauvinist movement that was supported by bored elites and opportunistic politicians.

In his analysis of the PPP, “Pakistan People’s Party and Urban Pakistan”, Raza offers the same tired establishment claptrap as to why the PPP has lost support in urban Punjab.  The article can effectively be summarized as a yearning for the PPP to remain confined to another coffee house or tea house party chanting outdated lefty slogans from the 1960’s and having no mass following.  While lambasting the PPP for its  “dynastic politics” and how it was hijacked by Benazir as her birthright, Raza makes the astonishing contradiction, or rather exposes himself, when he asserts “why Mir Murtaza Bhutto could not penetrate in the party when he came back”

This is where the urban elite’s contempt for PPP is laid bare;  A charismatic, highly intelligent, globally renowned, educated individual who was immensely popular with millions of Pakistanis who came out to cheer her and vote for her, is somehow an autocratic dictator whose leadership of the party represents dynastic politics and who does not heed the advice of the “2ndTier leadership of the party” (who this leadership is left to the reader’s imagination).  On the other hand, her brother, whose leadership competency is at best questionable, and whose splinter party performed abysmally at the polls is held up as a sign of progress! One is surprised that Raza cannot see the sheer absurdity of his arguments.  In staking the claims of Murtaza Bhutto, Raza is not only completely contradicting his stance on dynastic politics, he is advocating tribal patriarchy as a means of doing so!

In his comments on Pak Tea House (PTH) and else, Raza often laments how ZAB sidelined the leftist elements of PPP.  Like millions of other Pakistanis, my association with the PPP was due to ZAB’s charisma and articulation of the party’s vision.  He made mistakes such as giving space to the Islamists and agreeing to the latter’s demand to apostatize the Ahmedis.  The launching of the operation against the Baloch nationalists is another black mark against him as is his governments role in supporting the beginning of what later morphed into a Jihadist nightmare against Leftist-Socialist nationalist government in Kabul.

However, to discount the role of a powerful establishment in these sad chapters of our history would be tantamount to a grave act of omission. The State was and is still dominated by an un-elected security-Judiciary-civilian bureaucracy combine whose stranglehold on the state has nearly choked it to death. If the acceptance of the voter’s repeated mandate for the ZAB and BB lead PPP is being a Jiyala, then count me in.

If questioning the role of a biased judiciary and its subservience to the imperatives of the security-bureaucracy establishment makes one a Jiyala, then too please count me in.

Furthermore, it seems that Raza has forgotten the role of these 2nd tier leaders and third raters like Khar, Ghulam Mustafa Jatoi, Hafeez Pirzada, Mumtaz Bhutto, Mubashir Hasan and Mairaj Mohammad Khan who deserted Bhutto and have since combined with the establishment and its pet proxy, the Jamaat Islami, in playing the same destructive politics that have brought Pakistan to its current situation.

In reading the like of Raza Habib, one is amazed how these urban lap top warriors reserve all their contempt at elected politicians that are not part of an increasingly chauvinist Punjab. These laptop warriors dare not write against the Taliban or their Pak Army backers and their loyal servants, lead by the shifty, corrupt, compromised Chaudhary Iftikhar and his coterie of chauvinist, Islamofacist Punjabi Judges.

After committing judicial murder and acting like the toilet paper for dictators and bureaucrats who wanted to legitimize their palace coups and mangle the Constitution, these Judges jumped on a pro-democracy movement that was spearheaded by Shaheed Mohtarma’s negotations to recreate a political space for a future democratic setup.

After being reinstated in July 2007, these Judges ruled against Musharaf’s NRO for BB but conveniently looked the other way for the unwritten NRO that allowed Nawaz Sharif to return back from the Jeddah palace; this is where this Punjabi “lion” fled to after signing a deal with Musharaf, while the current president, Zardari, languished in jail for the better part of a decade on trumped up charges. The same judges under Chaudhary Iftikhar, who twice took an Oath on a PCO and not the Constitution of Pakistan, played along with Musharaf and allowed him to mangle the constitution to his heart’s content.

After the 2008 elections, when the newly elected govt. freed these judges from House arrest and reinstated 90% of them, a faux movement continued with a strange combination of disloyal PPP leaders like Aitzaz, the bar council, Jamaat Islami and its current pet, Imran Khan and all the other Ziaist elements like Roedad Khan, Hamid Gul and all those “uncles” who stabbed Bhutto in the back such as Hafeez Pirzada, Mubashir Hasan and other such assorted characters.

Today, the lawyer’s movements has been exposed for what it is: a counter democracy movement that is supported by the establishment to completely emasculate the democratically elected government and to make a mockery of the mandate of the people of Pakistan. It is reversion to rule by the “salariat class”; un-elected bureaucrats who combine with the security establishments to rule the country and completely bypass the elected representatives of the people.

The movement to restore the judiciary was never about taking a stand against the institutions that have subverted democracy. The slogans against Musharaf were half-hearted as even Chaudhary Iftikhar never really took a stand against him and the verdict on Musharaf’s candidature on Nov. 5, 2007 would not be able to stand up under a thorough and objective scrutiny.  Today, the Judiciary’s bias against the PPP-lead government is only matched by its messianic zeal in freeing dangerous Jihadi and sectarian murderers like Hafiz Saeed and Abdul Aziz of Lal Masjid.  The lack of evidence that is cited as a reason has not stopped the Judiciary from continuing its selective lynching of the PPP leadership on trumped up charges by non-constitutional bodies like NAB.

Today, some of the leading lights of this movement like Aitzaz Ahsan, Ali Ahmed Kurd and Asma Jehangir are positioning themselves against some of the initiatives of the Judiciary. However, history will not forgive them for their subtstantial role in creating what is now a Judicial Dictatorship that is subservient to the only force that is powerful in this country; the GHQ that brought it back into power!

In a similar vein, Samad Khurrum’s rant that was courageously published by LUBP reinforces how the urban bourgeoisie has always been against progressive and populist movements that place their faith in the pluralistic and syncretic nationalist ethos of Pakistan.  This is the same Samad Khurrum who opposed the drone attacks; as evidenced by his own reductionist arguementation style, does that mean that he supports Baitullah Meshud and all the other transnational Islamist mercenaries that have wreaked such havouc on Pakistan and killed and maimed thousands of its civilians.

Unfortunately, most of our urban middle class intelligentsia is damningly silent on the atrocities committed by the Taliban. LUBP has probably been the only blog that has consistently highlighted the repeated massacres of the Shias, the pogroms against the Christians, Ahmedis and Sikhs as well as the militant actions against Baloch Nationalists.

Today, the likes of Samad and Raza want to dictate that progressive blogs like LUBP stop supporting the correct initiatives of the government and instead join the establishment band wagon of the selective lynching of PPP. They want the LUBP to become just another civil society blog that bases their stance on the reactionary and establishment-fed gossip and innuendo spewed in the drawing room parlours of the elite.

Our feedback as those who stand by the LUBP is as follows:

Why don’t you jump off the fence and go back to supporting Imran Khan and Nawaz Sharif and their ideological allies, the Taliban and Sipah Sahaba. You don’t vote for the PPP and in Raza’s case, you voted for the PML N.  Please stop trying to make the LUBP as just another civil society blog or the mouthpiece of corporate groups and closet Jamaatis like the JANG group.  We will be critical of the wrong actions undertaken by the PPP.

However, we will not abandon our progressive ideals and what we feel is the promise and potential of the PPP as currently the only political force that respects and represents the plural traditions of Pakistan.

We support our party, warts and all and will continue to anchor ourselves with progressive movements that are free from those who practice the facist politics of religion and ethnicity.

You can continue to vent your confused ramblings on the scores of other blogs and TV channels.  Your class can continue to celebrate privately and shed crocodile tears publically everytime a charismatic leader like ZAB or BB is executed by the establishment.

You can continue to find solace in your mythical depiction of Jinnah and Iqbal; we on the other hand will continue to strive for progressive and secular ideals that are anchored in real politik.