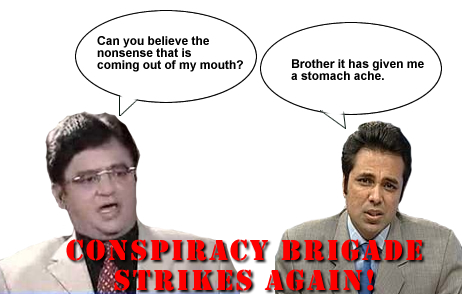 The conspiracy brigade strikes again, and right on cue. When I first saw the news that some Pakistani had been arrested for the plot to bomb New York, I knew it was just a matter of time before the conspiracy wallahs were out in force.

True to form, Talat Hussain ranted on Aaj that there is some secret plan to pressurise Pakistan to ‘do more.’ He even tried to revive the stinking corpse of the Seymour Hersh conspiracy and Kerry-Lugar by saying that bills such as this are just there to offer a price.

This is the same nonsense that was being recited by Kamran Khan on Geo. Whatever channel I turn to, I am hearing echoes of the same utter nonsense about how maybe the timing of Hakimullah’s statement suggests a conspiracy against Pakistan.

The only surprising thing about the return of the conspiracy brigade is that they took so long to get their story worked out! I’m especially surprised that it took them so long since they seem to have only been able to revive some old dead conspiracies from the past. Really, guys, I expect you to put a little more effort into your work!

But seriously, let’s consider the facts here. This idiot Faisal Shahzad tries to blow up a car bomb – he even admits to it. For the conspiracy brigade, though, it is everyone’s fault but Faisal and his jihadi mentors.

Why can’t this idiot just be an idiot? 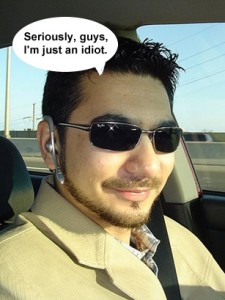 For the conspiracy brigade, it’s always the same story. After Mumbai, same thing. These conspiracy theorists want us to live in denial always. The fact that these conspiracy wallahs are hawking this nonsense on TV really makes my blood boil. For all their complaining, our problems will not be solved by pointing the finger at India or some blaming some conspiracy in Washington every time some idiot decides to blow himself up.

Guys, I hate to tell you this, but there are actually some idiots in our country. We need to face that fact so that we can do something about it. Because there is one conspiracy against Pakistan that is very real – the conspiracy by the terrorists who continue to attack us.