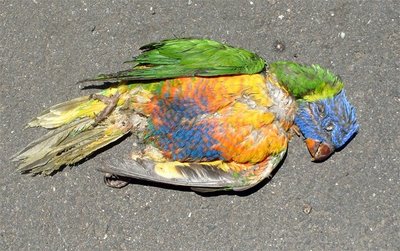 Communications from well meaning leftist friends indicate that some of them misunderstand my criticism of Islamism. They seem to think that my objection is primarily moral. That I somehow think orthodox Islam is very uniquely evil and that I don’t know that capitalism and imperialism and Christian evangelicals and Sarah Palin are even more evil and why don’t I give the Islamists a break since they are at least fighting against imperialism and yadda yadda yadda, you get the picture.

I understand why this misunderstanding arises; it arises because some leftists (especially in the US, where the left is not a viable political force and so attracts dreamers more than doers) are moralists and puritans at heart and see everything in moral terms. So for all these good friends, my rant of the day:

My criticism of mullahism or Zaid Hamid style burger jihadis or ISI-style sophisticated and underhanded jihadists is not primarily moral (it is PARTLY moral). My biggest complaint is that the parrot is DEAD! It died 800 years ago in Baghdad. He has ceased to be! he’s expired and gone to meet his maker. He’s a stiff! Bereft of life, ‘e rests in peace! His metabolic processes are now ‘istory! ‘E’s off the twig! ‘E’s kicked the bucket, ‘e’s shuffled off ‘is mortal coil, run down the curtain and joined the bleedin’ choir invisibile!! THIS IS AN EX-PARROT!!

I am not saying the capitalism or imperialism or whatever are OK and only mullahism is a problem. I am saying this dead parrot is a bloody distraction from the LIVE debates we could be having. It may be hard to say what the morally correct choice is in case A or case B, but its much easier to dismiss the choices that are no longer viable and have already visibly decayed and started to rot. THIS is not a viable parrot.

Finally, I do NOT mean to imply that “Islam” is the dead parrot we are talking about. Islam is alive as long as Muslims are around and surely they are going to be around for a long long time (If I remember correctly, in the classic sci-fi novel Neuromancer, they are even floating around smoking ganja in that orbiting space station where the Tessier-Ashpooles live, though I may be mixing things up here; on the other hand, there were no Muslim characters in the original Star Trek; make of that what you will). Islam will continue to grow and evolve and will be adapted to many things, as it has been in the past. But the dead parrot of the caliphate and “return to original purity” is the mother of all dead ends. To waste time and lives trying to revive that particular parrot is a waste and I am sure we can all agree that waste is not good.