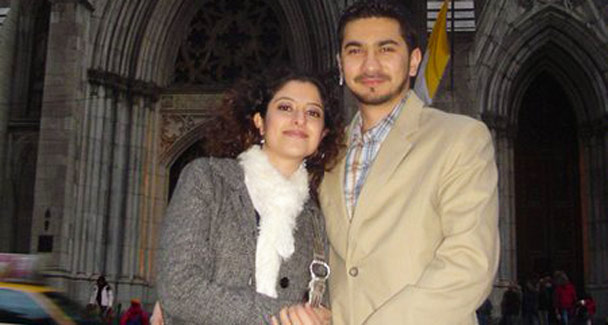 This undated photo shows Faisal Shahzad, right, and his wife Huma Mian. Shahzad was arrested at a New York airport on charges that he drove a bomb-laden SUV meant to cause a fireball in Times Square, federal authorities said. –AP Photo/Orkut.com

From the moment the world saw footage of the SUV belching smoke in Times Square, you just knew that it was going to be a Pakistani.
And Faisal Shahzad didn’t disappoint. Never mind that the plot seems to be have been ridiculously amateurish, that the ‘bomb’ seems to have been assembled by a third-grade chemistry student, that Shahzad was more bungling idiot than mass murderer.

But now the world has yet more proof. Pakistan. Muslim. Terrorist.

Conspiracy theorists here, though, are hard at work spinning the facts in the opposite direction. The 9/11-was-an-inside-job brigade has gone into overdrive. Isn’t it odd that Hakeemullah rose from the dead only a few days ago, they ask? How convenient that Shahzad names Waziristan, the place the Americans are fixated with, they thunder.

And on it will go. Over in America, Fox News and the like will trot out headlines like ‘The Pakistan connection’ and add redundant question marks in statements such as ‘Hub of terror?’ and ‘Global menace?’

And here in Pakistan you’ll have news reports about the ‘anti-Pakistan’ Indian-born prosecutor handling the Shahzad case, with not-so-veiled references to Preet Bharara’s ‘Jewish relatives’. (I wish I was making this up; a local TV channel, best left unnamed, carried a breathless report on Bharara’s alleged biases and ancestry earlier this week.)

But away from the cacophony and largely outside the media, hard, and meaningful, questions are already being asked.

That Shahzad is apparently an idiot proved to be a stroke of good luck. He could easily have been smarter, something you don’t want your wannabe mass murderers to be. But he epitomises a vulnerability, one that the militants have figured out and appear to be working feverishly to exploit and which the West still seems at a loss to understand.

What exactly is driving people like Shahzad to embrace this madness? Here’s a seemingly normal 30-year-old Pakistani man who has made it good, entering the West through the front door in search of educational and employment opportunities. He’s got two kids, a pretty, happy wife and has a vain streak (if his Orkut pictures are anything to go by). What set him off on the path of madness?

To ask this question isn’t to embrace the self-serving theories about ‘legitimate’ Muslim grievances and the oppression of Palestinians and the war in Iraq feeding a murderous rage among Muslim youth.

It’s to identify a potentially catastrophic security threat and deal with it adequately. Frankly, it is impossible to ensure that there will never be another Shahzad. No response to any threat can ever guarantee a zero failure rate.

But as the global jihadists have realised that penetrating the western defences from outside post-9/11 has become more difficult, they appear to be working on potential threats from within.

It took eight years between Ramzi Yousef’s bombing of the World Trade Centre and 9/11. That the jihadis have failed to launch a serious attack inside the US may only be a matter of time of finding a smarter Shahzad or a smarter bunch of five disaffected boys from Virigina.

Yet, that’s a problem for America, the UK and other western countries to figure out. Here in Pakistan, the Shahzad case ought to have the alarms bells ringing even more furiously.

Why is it so easy for all these wannabe jihadists form the West to travel to Pakistan and plug into the world of religious extremism here?

Fata may be a tribal backwater, an anachronism in the 21st century. But there are no direct flights to Mir Ali or Miranshah. The first port of call for the wannabe western jihadis is Karachi, Lahore or Islamabad.

It’s in the cities and towns that the wannabe jihadists begin their search, usually by looking for a local mosque or madressah or religious centre of some sort run by some guy with connections to the world of militancy.

If some idiot with a murderous agenda from Connecticut or Viriginia can find these linkages, then why can’t the state here? The short answer is, it can. Your local cop or crime reporter can identify the suspicious neighbourhoods, mosques and madressahs. It’s not exactly a great mystery.

Surely, 10 years since 9/11 and three since Lal Masjid, the state ought to have done more to dismantle the urban links to the hotbeds of militancy in Fata. Why are the CDs glorifying suicide bombers still so easily available outside certain mosques? Why is the sectarian hate literature disseminated so widely? Why are the audio tapes urging people to take up arms against ‘infidels’ so readily accessible? It would be naïve, certainly premature, to assume the infrastructure of jihad in urban Pakistan is the sole, or even main, reason Shahzad turned to radical Islam. But surely the fact that it is so easily accessible contributes to people like Shahzad, or future Shahzads, acting on their newly discovered hate.

True, all of the hateful material is easily available online but you don’t become a would-be bomber by sitting behind a computer screen. That’s why these guys travel abroad. But why are they travelling to Pakistan and not, say, Egypt or Syria or even Sudan or Somalia?

For sure, going in guns blazing isn’t the answer either, as the extraordinary blowback from the bungled Lal Masjid operation has proved. You don’t want to create another mess while trying to clean up an existing mess.

But so long as you or I or some idiot like Shahzad can all too easily find jihadi inspiration and worse in Pakistan proper, we aren’t really doing much to clean up the original mess, are we?