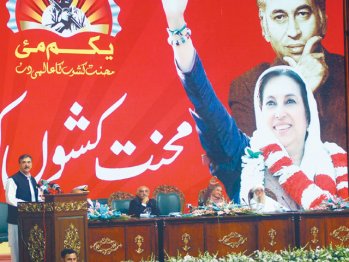 Consistent with its election manifesto, the PPP government has finally taken a step in the right direction by announcing a new labour policy (effective 1 June 2010). The policy comprises a number of appreciable elements in order to protect workers’ rights and to alleviate their economic and social hardships.

According to Prime Minister Gilani, the new labour policy “reflects the vision of Benazir Bhutto”. He said the policy would benefit around 50 million labourers, who were playing a key role in the development of the country. The prime minister praised President Asif Ali Zardari for “pursuing the labour-friendly policies”. (Source)

The policy is in line with the requirements of economy, employees and employers. The workers have been given the right to seek legal remedies against dismissal, while their basic remuneration and other benefits have been enhanced.

We provide below a summary of key features of the new labour policy identified in various news reports:

– all industrial, commercial and other establishments registered under any law would pay wages to employees through “cheques/bank transfer”;

– all contract employees in the public sector would be regularised within the “shortest possible time”.

– social insurance for old-age benefits and health services would be introduced on “self-registration/voluntary basis, to benefit all workers in the formal and informal sector of the economy, including self employed citizens.

– The registration of all workers would be linked with the smart cards being issued by NADRA.

– the entitlement age for old-age pension would be reduced from 55 years to 50 in case of mine workers.

– tripartite monitoring committees would be set up at the district, provincial and and federal levels to monitor the implementation of labour laws, particularly those dealing with the payment of wages, and the work environment and timings.

– A review board shall be established to consider the cases of such workers who had been dismissed under the Removal from Service (Special Powers) Ordinance, 2000.

– The government will ensure full adherence of labour laws and worker friendly environment in all establishments to promote decent work in the country.

– Matric Tech Scheme shall be introduced in all schools run by the Workers Welfare Fund to impart technical education to the students.

– A full-fledged Labour Market Information System shall be established with the creation of a Human Resource Centre in different cities.

– The survivors of a registered insured person under the EOB Act will be paid Survivors Pension without any condition of minimum insurable employment.

– The EOB Act will be made applicable to the contingent/project employees of such statutory bodies which are otherwise exempted under the provisions of the Act.

– Pension shall be enhanced with the enhancement of Government Servants Pension at the same ratio.

– The age of entitlement of old-age pension will be reduced from 55 years to 50 years in case of mine workers.

– All workers registered under the ‘Universal Registration Scheme’ of the EOBI would be eligible to benefit from the Workers’ Welfare Fund.

– Subject to recommendation by monitoring committees, dismissed or retrenched workers would be paid legal aid up to a maximum of Rs 15,000.

– The daughter of a labourer will be paid Rs 70,000 in stead of Rs 50,000 as Jahez Fund. Moreover, the heirs of those dying during service will be paid Rs3 lakh as compensation.

– Removal of the draconian labour laws by repealing the Removal from Services (Special Powers) Ordinance 2000 and amending the Services Tribunal Act 1973 that would protect the working classes from exploitation and arbitrary termination from service.

– The Removal from Services Ordinance was a bad law as it conferred arbitrary powers on the authorities in violation of the fundamental rights of workers, while Section 2A of the Services Tribunal Act 1973 had snatched the rights of workers to take their disputes to the Labour Courts, Labour Appellate Tribunal as well as the National Industrial Relations Commission. The workers will now enjoy job security as the president has signed two laws to repeal the Removal from Services (Special Powers) Ordinance 2000 and amend the Services Tribunal Act 1973 after adoption from the parliament houses.

– Repealing the ordinance will ensure job security for government labourers and also restore workers’ rights as the employers could no longer sack employees arbitrarily. These two laws had deprived employees of their rights to approach labour courts for a remedy, which has now been brought to their logical ends by the present government.

– The government’s decision to offer 10 percent share in the public sector organisations would benefit 500,000 employees, while thousands of youths are being trained under the Shaheed Benazir Bhutto Youth Development Programme to lead the country towards new avenues of prosperity and development.

– Shares have also been handed over to the workers in the public sector corporations to make them partners and ensure their role in decision-making.

– Under the new policy, the industrial labourers the minors aged below 18 would not be allowed to work in uncongenial and improper atmosphere.

– The number of women at any company would be specified under ILO Charter.

– The new policy also stipulates the rules and regulations relating links between employers and employees.

– A comprehensive social insurance for old-age benefits and health services on self-registration/voluntary basis to allow all workers in formal and informal sector of economy, including self employed persons, to benefit from it.

– The children of workers will get technical education.

– Manpower information centres in cities will be set up, trainers will be equipped with knowledge to spread vocational education,and para-medical staff will get specialised training, he said.

– Pensionable age limit under the old-age benefit will be lowered to 50 years.

– Smart card through Nadra will be issued, so that registered workers can get various facilities, legal support of Rs 15,000 will be arranged for out of job workers.

– Free medical treatment will be provided for the labourers.

– Workers have been given the right to form unions and labour bodies to protect their rights.

Source: Associated Press of Pakistan, 2 May 2010