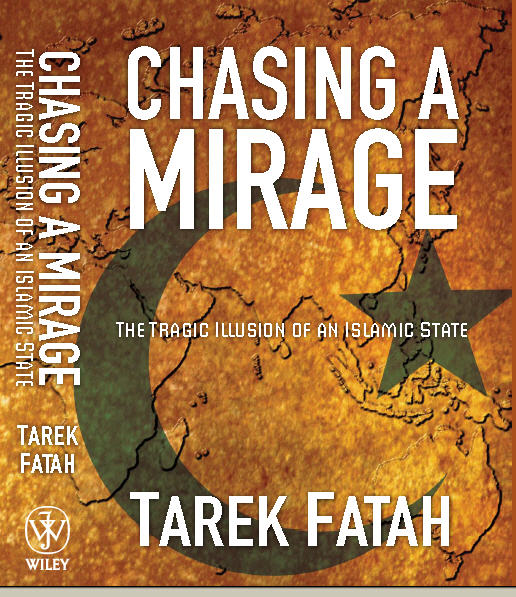 The LUBP is pleased to present for the benefit of our readers a PDF of Tarek Fatah’s book Chasing a Mirage: The Tragic lllusion of an Islamic State (2008). The book is dedicated to Shaheed Benazir Bhutto and Daniel Pearl and is a passionate effort against the Islamists who have destroyed our country.

Here is the link to the book:

Tarek Fatah 2008 – Chasing a Mirage: The tragic illusion of an Islamic state – The book

“I think this book is a positive contribution to the discussion about contemporary Islam and certainly a valuable addition to the voices that are critically looking at Islam’s right-wing. . . . I don’t think there is any other public intellectual in the North American arena — Muslim or other — who could have written this book.” (HuffingtonPost.com, April 15th, 2008)

“…a book worthy of attention…both for its contents and for the courage of its author.” (Haaretz, October 2008)

“Tarek Fatah has written a provocative and challenging book, which is a must-read for anyone who cares about these issues.”–Janice Gross Stein, Director, Munk Centre for International Studies, University of Toronto

“Chasing a Mirage is an extremely valuable contribution to the fight by progressive Muslims against Islamic fascism. This book should be required reading for the Left in the West who have mistakenly started believing that Islamists represent some sort of anti-imperialism.”–Farooq Tariq, Secretary General, Pakistan Labour Party

“Fatah argues passionately for universalism instead of exclusivism, integration instead of ghettoism, and makes a powerful appeal for the silent majority of Muslims to speak out before it is too late. This work of courage and daring needs to be read widely.”–Pervez Hoodboy, Professor, Quaid-e-Azam University, Islamabad, Pakistan

“This fascinating work by brave and brilliant Tarek Fatah is simultaneously thought-provoking, instructive and enlightening for laymen and scholars, Muslim and non-Muslim … an invaluable and rare addition to the corpus of Islamic literature in the post 9/11 world, a bold step towards Islamic Reformation and Enlightenment.”–Taj Hasmi, Asia-Pacific Center for Security Studies, Honolulu

“Tarek Fatah’s is a voice that needs to be heard. Canada needs a healthy, reasoned debate about the issues he is raising, and indeed, so does the world.”–Bob Rae, Member of Parliament, Canada